A way to deal with private roads

I am finding I am coming across an abundant amount of “Private Roads” that can be walked/ran but we don’t get credit for them. Many times I cannot determine whether a street can be run until I am actually on the run and see what I’m up against. The road could be gated, posted, or both. It may be a neighborhood that is privately maintained but has no indications that walking/running that street is prohibited. There are way too many streets to change in OSM and I’m not sure that any us in this community should be changing streets from public-to-private or private-to-public without some significant research. I have made changes in the past only to have a more advanced OSM user revert the change, even when I’ve physically been to the street and know that OSM does not accurately reflect the street.

I understand many peoples feelings on this topic as they have been discussed elsewhere in the forum. So I am coming up with a suggestion that could allow people to complete a street/road or pass it by without affecting their ability to complete a city/town.
If we had 2 sets of streets for each town. One would contain all the public streets, as it is today, and those streets would be listed under each city and would need to be run in order to complete that city. A second set of streets would contain all the streets that did NOT meet the prerequisites of the first set of streets and could be hidden. If a person ran and completed a street in the hidden list, they would get credit for that street and it would appear in their list of completed streets. So, lets say it takes 420 streets to complete Town “A”. One person may show Town “A” at 100% with 420 streets completed and another person may show that same town at 100% with 433 streets completed. The person ran the mileage and completed the street, so why not give them credit for it. This would also eliminate the need for unnecessary edits in OSM that only benefit CityStriders. Any thoughts?

I’m not sure about your solution but it’s an interesting problem which I’ve thought about since I started. Another situation is roads that are only open during special events - in these cases I wish we could get credit for them. My example is the two big bridges that go to Lisbon from the south, they are both autoestradas (highways) closed to pedestrian access, but during certain races they are able to be run. That’s the case for a lot of races for sure.

For me, I think it would be more elegant or fun if certain of these non-pedestrian roads could be like ‘easter eggs’ for people trying to be completist about their city to have to figure out how to finish those roads. Maybe they don’t show up in the street list, but there is a special badge or something. One issue with this is it would require too much local/regional knowledge for someone like James to execute, but maybe something to think about for some future version of CityStrides where there’s more local input…maybe a way for runners from a certain region to suggest these special badges and then they are reviewed or voted on by the community.

Anyways I’m getting far afield from your idea but I’m just riffing. It’s an interesting topic and thank you for bringing it up!

My 2cents here:
i like the setup as it is now to get 100% copletion on all public streets. If someone wants to do more by goin on private roads, cycle ways,paths, etc. Just enjoy the lifemap and continue

Just to be clear, I was not advocating a change to the way we complete a town today. I would just like to see a way to document what an individual has actually completed. In other words, I would like to see a list of what I have actually completed. @kevincharlespels makes an interesting comment about streets that may only be open during certain times of the year, or maybe a person lives on or has gotten permission from a landowner to run a street. There are many legit ways to get a street, but I don’t necessarily want to see “badges” or rewards because I don’t think we should encourage or reward people to get a private road at all costs. I didn’t want to make this part of the competition, I just wanted to have documentation of what I have completed.

Well “documentation of what I have completed” is what the purple lines on the LifeMap are for! I agree we don’t want to incentivize dangerous behavior or trespassing, at least not without plausible deniability

I agree with Patrick. After I had completed my home town Lidingö in CityStrides, I then went over to Wanderer and ran all cycleways, footways and paths. But looking at my LifeMap I was annoyed by the white line Gåshagaleden as you can see in the picture 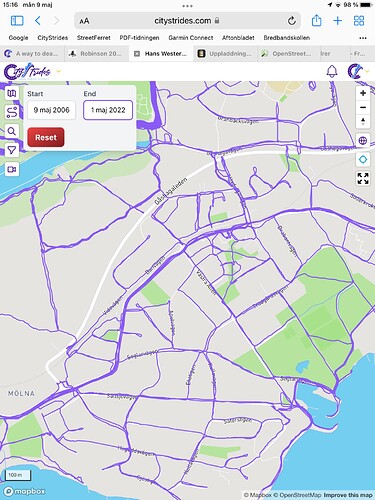 image1536×2048 257 KB
. It’s really only a normal two lane 70 kmh road, but with the ”No pedestrians or cycles” sign. So last Sunday I went out there at 7 am and ran it anyway. Took care to stop an step aside a bit when I met the few cars out at that time. So now no more white lines in Lidingö

A potential issue is that there are many reasons that a street could exist in OSM but not in CityStrides. Public v private is just one of them. In fact OSM has a few options for variations of ‘private’ and this can be set differently for different modes of transport. While it is clear that the current set of streets/nodes does not meet everyone’s expectation, it will be difficult to come up with a different set that does. Should this alternative set be based on the same query, except the private tag? This could still exclude streets that you would like included, based on other tags. (Very simple example: it does not have a name.) It might also include highways, military terrain etc. If only OSM had a Is it runnable? tag!