I appreciate that by walking past the end of a road, you’ll obviously trigger that node. This is usually fine.

However when you have long straight roads, simply walking past both ends of the road triggers it as being 100% complete. For example Iveagh Road (which I have since walked down making this screenshot less useful… 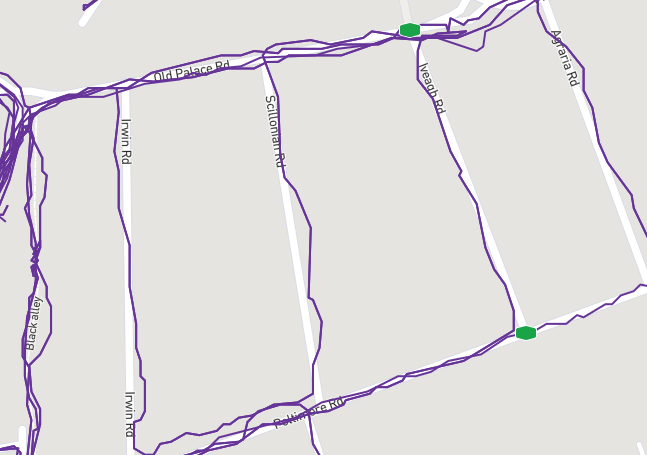 Notice it has two nodes and my other walks have already triggered these.

This isn’t a huge problem obviously, as I catch it and make sure I go down the road to play fair. However at some point it might be worth addressing it.

Great job on this site btw, I think its fantastic!

Hey @joel and welcome to CityStrides!

There isn’t a way to change that in CityStrides, as the data (nodes included) comes from Open Street Map. If you were a stickler you could modify the data there, otherwise it just it was it is, and comes down to what you consider to be “completed”. Most Striders care more about actually doing the roads themselves and will complete the streets individually as you have done.

You can read more about everything I mentioned at this Wiki page: About the Node, Street and City Data

Someone in our local heatmapping group found some user in NYC where they were clearly taking advantage of just running the minimal nodes instead of streets. You wonder what’s the point??

I suppose there’s a little bit of logic. This site can be seen as a game, with a set of rules that define how you score the points. If you’ve found a shortcut that isn’t directly cheating, arguably you’ve just found a more efficient way to score points?

In reality this is just a side-effect of how it has been implemented, and not really in line with the spirit of it

I mean, with the duplicate road bug all of the challenges and leaderboards don’t matter much anyways but I guess if you want to be that first person to 100% for a city you get that fake badge until someone sees your lifemap lol

Yeah, as has been discussed elsewhere, do what you want to do.
It’s not “cheating”, and there aren’t any defined ethics, but I certainly agree with @dallas.devries that it just seems like a weird thing…

A: You ran every street in your city? Neat!
B: Well, no, actually I just hit all the nodes as defined by OSM.
A: What are nodes? What is OSM? Why would you do that?

How interesting that you just posted this! I am doing the same thing and making sure I go down the road, too. Just don’t want to miss any!

When I thought of writing down my solution to this problem in the “Ideas” category last year, I discovered that it already exists: Suggestion: Interpolated nodes to address premature street completion

in your suggestion to edit the source data in Open Street Map, what happens if you’ve already completed a run on that street before the additional nodes were added? Will they show up as incomplete once they are brought into CS and then have to run it again or mark manually complete? Or is the CS code smart enough to recognize that they were already completed by a previous activity?

I think this also applies to if you run in a neighborhood where there is new development - you run the new roads before they’re technically even ‘roads’ in CS, so do you get credit for them once the new roads make it into CS or do you have to re-do/mark manually complete?

This is one of the reasons James had not rolled out an OSM update procedure yet.

I think the plan is that when OSM is updated for any reason - modified streets, adding streets, changing things from foot=yes to no, any changes would then be checked against your complete activity history and your counts and percentages would be updated based on your historical runs.

I try to future-proof my runs by running all the new subdivisions in my area now with the hope/expectation that when they get brought into CS, they will already be completed.

thats my approach as well, run them now, just havent been around here long enough to see if they actually get marked complete when added. thanks.

And there is also the 90% of the nodes to complete a street aspect. Will you settle for less than 100%? Me? Only if it can’t be got, or is too risky.

Personally, I’m doing this for me. I plan to run all the streets, and gather all the nodes.

I have missed streets, but I’m using the LifeMap to find them, and run them when I’m in that area again.

I’m finding the concept of CityStrides fascinating and enjoyable.

Ah I was looking for discussion on this as have the same “issue” on Imber Grove in Elmbridge, England - CityStrides
Just done run either end but not the street itself.

I will go and do it properly especially as need a few more round that way anyway.

Is this because, in OSM, the road is just one line so there is no easy way of defining intermediate points?

The road isn’t really even a line, it’s a series of nodes. If you hit each of the nodes, you’ve run the street. There’s only a few ways to deal with this. First, you could go and add midpoint nodes to each street that falls into this pattern in OpenStreetMap. That’s not really a good idea because it adds data size to OSM for no reason, and you shouldn’t be editing the map in weird ways to make things work here. Secondly, this site could internally detect these cases and add virtual midpoints to streets like this. Technically doable, but not a lot of bang for the buck. Lastly, we can accept that any definition of “complete” is going to be imperfect and visiting every node in the city is not a terrible definition. You can always use the Strava heat map or the Life Map here if you want to see what you’re missing.

For a lot of people on thsi site, the only real truth is the lifemap coverage, note the street completion. But then again, this is a game all for yourself, and each person can decide what is ‘the truth’. For me, i check the lifemap and make sure every street is covered by gps tracking. street completion comes automatically then