Hi Tracy, the node hunter shows you incomplete nodes of incomplete streets for the section of the map that’s on screen. It’s a supporter feature, but well worth it

Bumping this to the top because hard mode is revealing a small number of nodes, but vastly spread out over a city, and I’ve had to individually click each street to show it on the map. Would be great if the number of remaining nodes was under a certain amount (that 1k limit?) we could display all missing nodes in a city. Thanks!
(My Durham, NC map is a good example of this)

That’s what the Node hunter does! 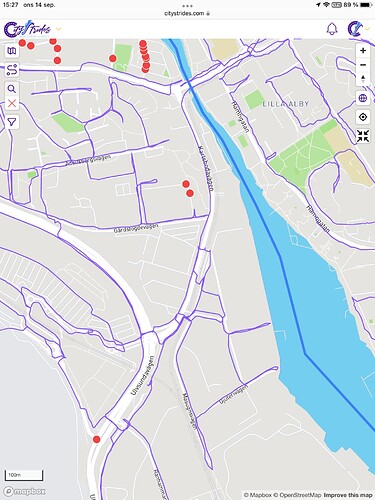 right, except you need to be zoomed in to see the nodes: here are my remaining nodes in durham: 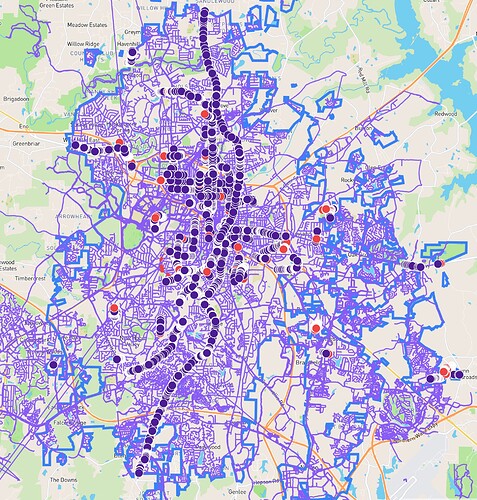 Not quite sure I understand, you don’t have to zoom in to use Node hunter, only thing is it won’t show more than 1k nodes. But if you have less than 1k missing nodes in one city (as I understand you’re saying you have) you will get those without zooming. Or did I misunderstand you?
(BTW, why does your screen shot show both blue and red nodes? I only get the red ones using Node hunter)

BTW, why does your screen shot show both blue and red nodes? I only get the red ones using Node hunter

You should only see blue nodes if you aren’t logged in.

Purple nodes appear in Jason’s screenshot because he has selected to show each of his incomplete streets individually; since he has hard mode enabled that means any missing street with at least one node. His screenshot isn’t from using the node hunter feature.

As another example, I’m working on same city and have 10 streets remaining with ~30 total missing nodes among those streets. At the default zoom level and selecting node hunter, I get the 1k node limit warning… at least I do on initial click. 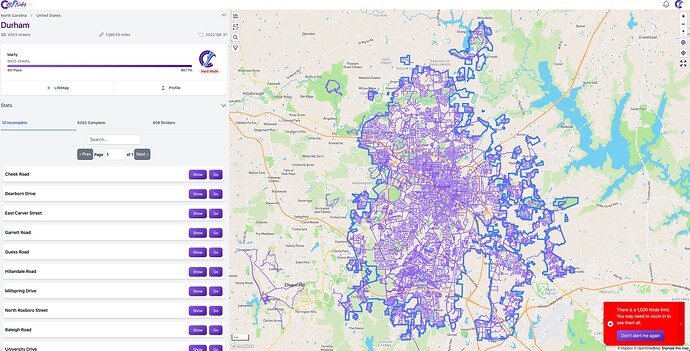 If I wait ~1 min after seeing the limit warning, then the individual missing nodes appear. So it looks like a city of this size requires some additional processing time to display. @jmcmains recommend giving it a bit extra time after selecting the node hunter at default level. 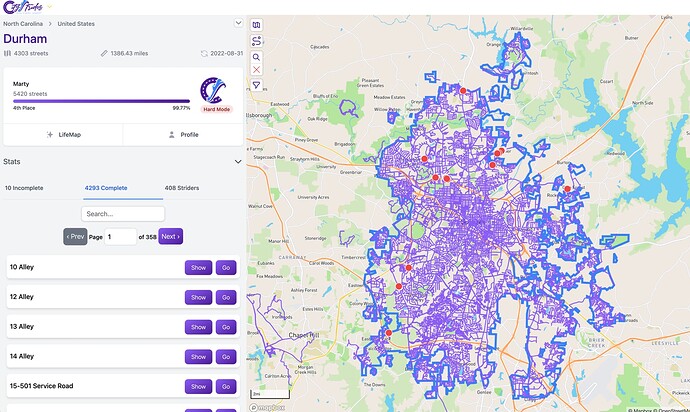 As to Tracy’s original idea, it’s to make what Jason did to produce his screenshot (ie select to show every incomplete street on map) easier with a one-click. This would be essentially the reverse of the I believe fairly newly added ‘Hide all streets’ button that appears after you select to show one street on map.

Ok, but remember this 1k warning is misleading! It appears when you press the node hunter if you are at a default zoom level (or even less zoomed in). But that’s just a standard warning that everyone gets regardless of above or below 1k nodes in that view. If you have less than 1k to display, they will display! If you have more than 1k, you will see only 1000 nodes.

thanks marty, yes, exactly this issue, i think i had to leave the window open for a few minutes, but i did finally see all of the missing nodes around durham: 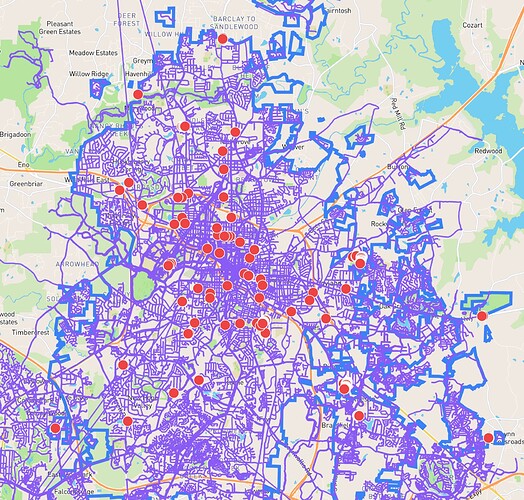 Sounds like @JamesChevalier might want to split that up into a separate bug report then. It works as you had in mind, but node hunter takes too long on too great an area. If there is no obvious way to optimise the query in the backend, perhaps an indicator that something is happening after you click the node hunter would at least help a little? On some slower ones I’ve also wondered whether I had just not hit the button correctly.

Yeah, that’s a lot of time…

I just sent out Updates on September 15, 2022 (Release 621) which uses a lot more cached data in a useful way… The first interaction with Node Hunter might still be that slow, but everything after that should be speedy. I don’t really have a ton of data to work with locally, though, so do let me know if it’s still

A post was merged into an existing topic: Node hunter not working in City view

Following up on this…
Some of my updates in Updates on September 15, 2022 (Release 621) caused things to be worse for some people. I’ve made some adjustments, with one person so far saying things are back to normal for them.

I’m wondering - @ward_muylaert @jmcmains @Marty - if you open CityStrides in a new tab & try Node Hunter again, is it still taking ~minutes for it to show nodes? If it does take a while on your first request, can you zoom/pan to a different section of the map & try Node Hunter again to see if that second request also takes ~minutes?

For me I never consciously had the minutes problem because I don’t usually press node hunter when zoomed out enough for that to matter. For Anderlecht (cs id: 29605) and Vorst (cs id: 29508) it seems to be about 7 seconds when zoom is showing that entire boundary. Clicking again without changing the area does not seem to change that. This is a delay I am used to though, so I am glad it now shows the indication that I correctly clicked it. For Brussels (cs id: 207687), a much larger area, I get 58s first click, 45s clicking again. Idk if this is accidental or because of some cache.

More zoomed in, it seems to be the usual delay of taking a few seconds. Panning or slightly changing the zoom does not seem to change much. The delay remains similar, if there is caching in effect for that situation then it does not make a perceptible difference.

To add, Durham is a much larger area than Brussels so it is likely to take much longer still.

@JamesChevalier this seems to have changed the outcome. before it was showing many more nodes in durham now I only see this: 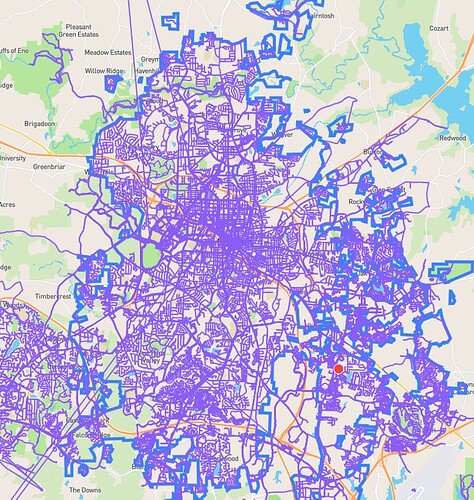 Ah, yeah, I see what’s doing that… I’m working on getting that fixed up now.
Unfortunately, this likely means that I’m not actually going to achieve my goal of speeding that Node Hunter query up for you (today, anyway).

Would it be possible to do the equivalent of selecting “view” for all incomplete streets as opposed to running the node hunter? Since the list is known, could this be faster?

This might be farfetched, but what about something like I see on OSM, where a single pink dot means there is more to see in the area, if you zoom in further? Perhaps, rather than a dot, an area is shaded, meaning more to see.

That’s great to improve performance within the browser, and it’s used in the Leaderboard, but the slowness is in the database. So, adjusting the view in the browser wouldn’t help here. I need to either improve the database query or size up the database.