Removing service roads from those included in citystriders

I wondered if it has been considered to exclude OSM roads with highway=service?

I can see from overpass turbo that highway=services is an exclusion and so are some specific types of service roads.

but i would have thought most service roads should be exclude. It seems to be used for many things, from a road leading to a company building, to those inside a cemetery. these often fall in to a grey space of you might be allowed to be on them, but it is frowned upon.

The first requirement for a street to be on CityStrides is for the street to have a name. Very few service roads have names, so it’s probably not a huge problem.

Personally, if it has a name and it’s legal to run on, I’ll be running it anyway. Heck, I even run some streets / paths / ruts that are unnamed just because…

If it has a name, and is OK to run on, I often find it might be classified wrongly. I have changed several streets like that to e.g unclassified or residential in OSM 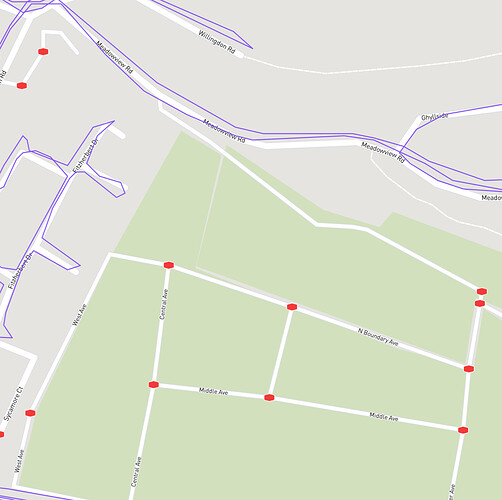 This image shows a couple of examples.
Top left is basically the service road/car park of a home for a building, it so happens to be for a charity for domestic abuse, I imagine they really don’t want random men running around their building.
I had already changed the status to driveway. but have not checked and indeed it had the name or the organisation. on OSM I have removed the name, added the building and added the name to the building.

You can also see one of the cemeteries I mentioned, the roads do have names here, however I’m not really sure its right to by running around a cemetery, even if allowed access.

If it’s a gated area with restricted access. I would draw the fence and the gates and give all lines within that area ‘private’ or restricted.

The issue I have is that a lot of these service type roads have the name “Access Road”, so come over to CS as runable streets… When updating OSM, I have left that the same, but set the part of the road that is gated off as “private”, so only the section of the road that is truly accessible is left as is.

I’d say Access Road in this case is not the name, it should be the desciption instead. And no name at all

Service roads are pulled into the CityStrides map, whether they are named or not. Where they have been tagged as private would it be possible, @JamesChevalier , for those to be shaded grey, as per private residential roads?
It’s hard to distinguish between the thickness of a named residential street and a named service road on the CS map on a phone screen while running. Seeing a named white line makes me wonder why my pre-planned route isn’t collecting it, so I inevitably have to stop and double-check where I’m going. Seeing the named service road in grey would help considerably. Example below of Ingle Mews (in the London Borough of Islington, UK) which is private and gated in OSM but is hard to distinguish from any other named street in CS 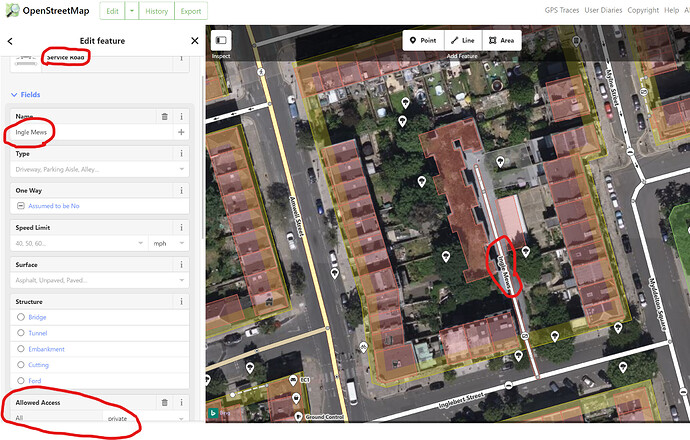 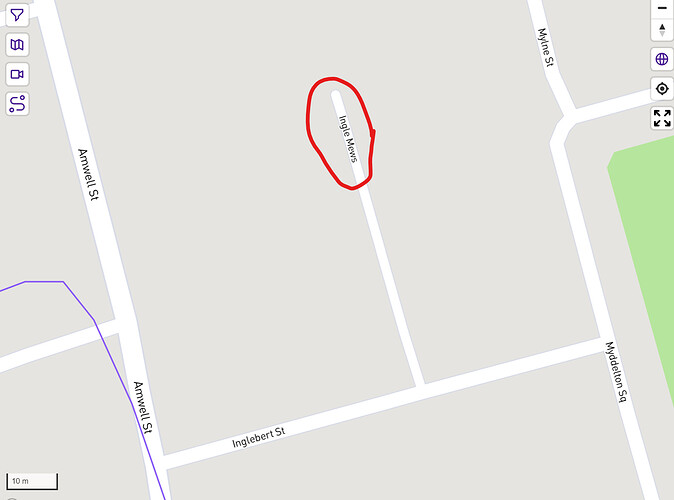 Service roads are pulled into the CityStrides map, whether they are named or not.

Can you share a link to an example street in CityStrides? Un-named streets should not be present, so I’ll want to start there.

actually, after reviewing the screenshots, it sounds like you might be talking about the map and not the data in the CityStrides site. The map is generated by Mapbox, it’s not from CityStrides data. I have some control over styling, but I’m not sure if I have control at the OSM tag level.

Well, that certainly answers a question I had which is a variation on the theme. I couldn’t understand why the MAP contained so many driveways, shopping center parking lots, and in my particular geography, an actual service road to a municipal water treatment plant. I was wondering why CityStrides [map] was showing so many ways that are private property and therefore shouldn’t be runnable, but now I know what we see on the map is [usually] a superset of the ways we need to run for a particular city. I am, however, finding it a nuisance to have to zoom in on all these little ways to verify that they don’t have a name, and are therefore unlikely to be in the CityStrides DATABASE. Rhetorically, why does MapBox think peoples’ private driveways (and some of these other odd-ball features) are worthy of display to the general public?

running around a cemetery

I don’t like the idea of running in cemeteries, but I have walked* in several. It’s very peaceful, and often very interesting.

Working on this one, in Granbury, TX. 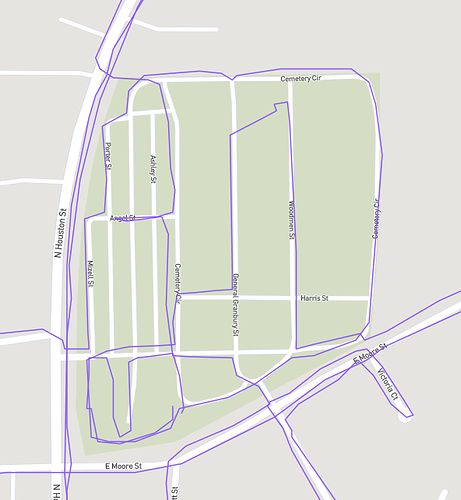 *Walking activities are processed by CS.