Doesn’t make sense to me that people who don’t share their lifemaps should be listed at the top of leaderboards. For one, we can’t verify that they aren’t cheating; for two, what is the point of a leaderboard if you can’t even compare yourself to the leaders?

In New Westminster (BC) for example the leader has 97+% but his lifemap only shows about 30% of the his runs. Perhaps you made the change to privacy while he was part way through?

It’s still an accomplishment; just if they want to be antisocial they don’t get to reap the benefits of a social platform!

Yeah, I agree from that perspective.

The permissions settings are weird because of the different aspects … I might be able to condense two aspects (lists & maps) down into just maps. Or even further into a “do you want to be public or not” choice.
I was just tying to provide the most options for people because there are certain levels of involvement that people either feel safe with or are safe with. There are a lot of people out there who cannot be as public with their life as others can, but I think they should be able to enjoy as much of CityStrides as possible.

Privacy is hard. My main concern is that I’m not causing people trouble/difficulty … everyone needs to be safe first and then have fun second.

Makes sense. I totally understand the need for privacy. A simple “public vs private” account setting would make sense to me. Over-complicated privacy settings are just likely to reveal data accidentally.

True. This looks like one of those “programmer writes the most idealistic code possible because it can be done” situations.
I also took too heavily from some services that I interact with - using their privacy models instead of coming up with my own (so in this way, the exact opposite situation described above).

Oh, I’m remembering a piece of it now - full account vs per activity privacy … by including per activity privacy, I inherently need to include an account-level privacy (do you want to be shown as a user in this site?) … so each aspect listed in the settings page kinda came out of that, I think.

I think “account privacy” makes sense, but only if you eventually add “friends”. Otherwise there’s not much value in having a public account with private activities. If you could have “friends” then you’d want your account discoverable, I guess.

But yeah, I mean… From a project manager point of view: you need to focus on your core product, which is getting cities and maps updated and accurate! The product is still fun for people even if it’s entirely private. I mean mine is entirely public and I don’t even know if anyone cares or follows or whatever. I tend to share it via screenshots or one-on-one chats.

From a project manager point of view: you need to focus on your core product

I need to hang “focus on your core product” on the wall behind my laptop. Or just write it directly on the wall with a sharpie…
Thank you.

From a project manager point of view: you need to focus on your core product, which is getting cities and maps updated and accurate!

I understand the sentiment, but I’ve always had trouble with the subsequent prioritization (which I think makes sense, given how easily my focus moves away from the core product)…

Well, your list of cities to add is certainly the highest priority. Each city is potentially 100’s of new users, and revenue. It’s obviously a challenge, and a bit of a drain probably mentally too. So gotta time box for that one.

The rest of everything is secondary. If you want to prioritize I think you probably find a way to sort topics in the “ideas” thread by likes. Or perhaps a new issue tracker with voting? Something like how Strava does it, but don’t ignore them forever like Strava does, haha. This issue here is very low priority. Adding Canberra and Ottawa are my highest votes

Since you are talking about prioritizing I would like to add a comment. Ask the question, “what is the goal of CityStrides?”, and you will quickly come up with the top items on the priority list. Supermitch mentioned adding new cities to bring in new users and revenue. I think another is finding a way to import just streets with the new cities. Although many of the added features are nice, they don’t mean much until the core product is functioning as intended. Things like leaderboards, percentage of city complete, etc are meaningless unless we have an accurate list of targets to achieve (Streets). Currently, I have 12 cities/towns completed and they show a range of completion from 61% to 97%. I generally come up with a list of streets and add any new streets (new developments) to that list and cross reference against googlemaps and/or satellite view. My thinking was, that as CityStrides was updated, my list of towns would just automatically update and become more accurate over time. There are too many towns in the world to expect James to update each town manually as we go along and there is too many junk targets (businesses, parks, etc) for me to flag. I know, James, you mentioned in the beginning, that it was easier to import all targets/objects when importing a city. Have you given any thought to how you could narrow that down to just streets and add other things if people request it? I think it would be better to have too little targets and have Citystrides meet 98% of your objective and add the few missing items/targets/objects, then to import everything and try to weed out all the bad stuff.

Agreed. Tooling for user-owned curation of data (a la OpenStreetMaps / wikipedia, etc.) is the only way to manage such an insane data set.

Hi Mitch! Dude, I can assure you that I ran all 97%+ of New West! It is funny though that it doesn’t show my whole LifeMap to you. Does the site still hide some of my runs?

Hey Duran, haha, I have no doubt you ran the whole thing, of course! Never doubted you for a second

Colin and I only noticed (because he’s chasing your %) that the map shows oddly like 1/3 of the city. I just checked your profile and can see hardly any runs. Many short runs but almost none that show any streets progressed. All the ones I checked weren’t in New West. If it’s a bug maybe @JamesChevalier can take a look. I assumed it was a privacy setting.

Yeah, I don’t know what’s going on here. When I log out and check myself, it still shows all the runs I did. Maybe something to do with the fact I used MayMyRun that makes it not visible to other users?

Actually, check me out now. Is it now showing all my runs? I just removed all my privacy settings. 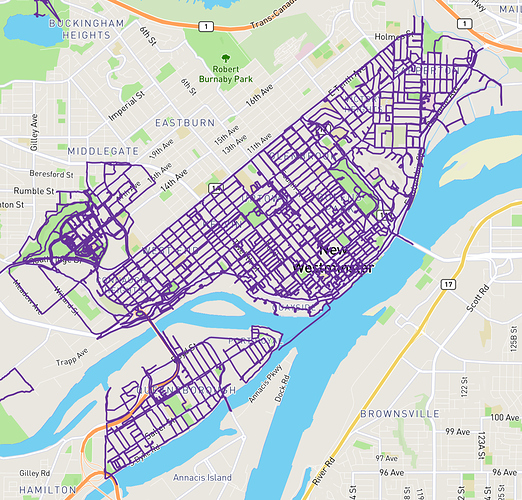 Yep, that worked. See image above.

Doesn’t make sense to me that people who don’t share their lifemaps should be listed at the top of leaderboards. For one, we can’t verify that they aren’t cheating; for two, what is the point of a leaderboard if you can’t even compare yourself to the leaders?

Also i agree that comparison to the leaders is great, I have been overtaken and would love to see the map of my fellow strider in Dordrecht and I wonder, also from this thread, if people are reminded their maps are private and if so if they can be motivated to make them public?

I would like to see all striders included on the leaderboard, even if it’s just as “mystery runner”. Right now it’s possible to build up an unassailable lead in private mode only to pop up at 100%, and everybody else never knew they were in a race at all…
I understand the rationale for keeping maps private. Maybe cheating could be stopped by capping the number of streets that can be manually completed? With good map data and an update process the set of streets that are unrunnable should shrink significantly.