I’m on Hayling Island (UK) at the minute, camping in the Motorhome by the sea. I walk /explore anyway, and come a few times a year, so I thought I would do CS on the Island. There seem to be a lot of areas that have declared themselves as “private estate” and lots of unofficial (non highway) signs with variations of “no public access”. There are street nodes in most of them. Example in photo.

Would you collect nodes here, update the nodes to no access, or just forget about it and go somewhere else? 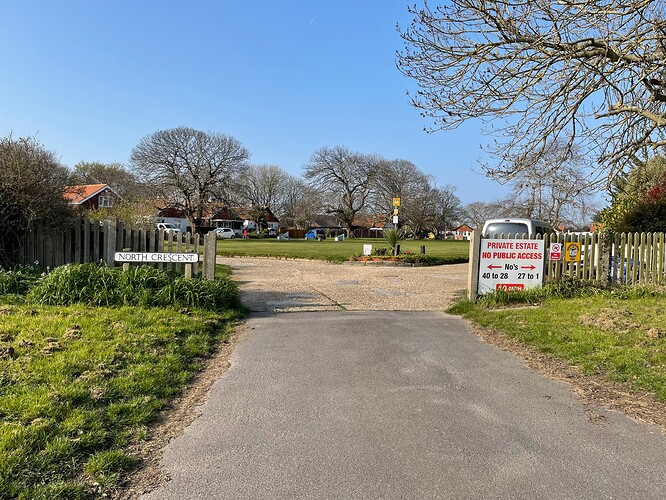 I would update them on OSM to private, then then next time the city gets updated in CityStrides the nodes will no longer appear.

I say go for the nodes, no way to tell if you live at 1 of the 40 residences so no one will report you for trespassing.

I’m doing a bit of research to try and find out a definitive answer in this. In this case I collected the nodes. And, as you say, nobody battled an eyelid. I’m interested to know the legality of these unofficial signs that people have obviously knocked up. This is clearly not a private estate. Nor are many of the others that have flagged themselves as such. If they were, it would leave much of the seaside around Hayling inaccessible.

Imho, Openstreetmaps should reflect reality as much as possible. If some places are private, then OSM should have them as private also. If that means less nodes in CS, so be it.

can someone please point me in the right direction of how to update OSM to mark private roads as private please?

Thats perfect, thank you. Will give it a whirl.
If I mark them as private it that means won’t need to mark them as manually complete.
Do you know when the next OSM update is please? Or how I find out?
Thanks

If in osm you tag private, the update will come in CS sooner or later. you’re manually completed streets will then be automatically be deleted. I am not sure about the current update rate for citeis, could be somewhere around 4-6 weeks rythm

I usually go to the local council planning portal (where you check progress on planning applications) to see their definitive maps. It’s usually pretty clear on there whether the road is private or not - then I update OSM accordingly

Hello, does anyone know how to change a part of a road to be private (no public access) on OpenStreetMap? I haven’t been able to figure it out. In OSM, I’ve placed tags on the nodes labeling them as such. For example, the southern part of Sagraves Drive in Vandalia, Ohio, USA is a private drive. Additionally, the southern part of Wyse Road also in Vandalia is privately owned. Any guidance is much appreciated. Thank you.

If using the web-based OSM editor, which I think is simplest: either select the node that marks the division or add a new node at the division (double-click on the part of the road, or select ‘Point’ at the top and click on the road to add it); split (hotkey ‘x’ while the node is selected) the two chunks of the road to create two separate roads with the same name; select the southern part and on the menu change ‘Allowed Access’ to All:private. Example of this process in the attached screenshot 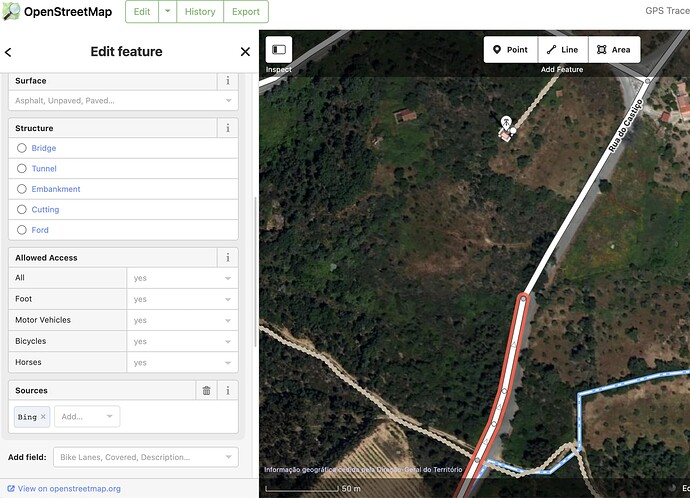 Thanks, Kevin! I’ll try it this evening.

Bingo! Thanks for your help! Do you know how often Strava refreshes from OSM?

Roughly 4-5 weeks intervals. Put it on manual completed in the meantime, it will disappear automatically when updated from OSM