At home, I’m frequently being mocked because I spent more time virtually running then actually running in the street. I guess my ratio for planning and analysing the ideal CS run takes 1.5 longer than actually running it. This, of course, strongly depends on your city lay-out, length and frequency of runs, and goals. This excludes any preparation/analysation you would need for your normal training run in the park such as getting shoes, dressing, showering, planning intervals, looking at your training statistics, etc.

Because of a poor ankle I can’t do more than 2, maybe 3, runs a week and also I secretly love planning the trips and often make multiple versions. So I think my ratio is at least 1.5:1, at times probably even higher. For James, it is without a doubt over a 1000:1

So how much time do you spend planning/analysing a CS run compared to running?

I look at my Lifemap and choose a good area to run. Drive there, and start running! But keep my phone in my hand and navigate, trying not to miss any streets in that neighbourhood😁

I try to be very strategic about how I run towns, now that I have to drive to get to new areas to run. For me it is probably almost a 1:1 for planning versus running. I try to avoid OSM issues by looking at the planned course in google earth to verify that I won’t run into places that don’t connect, etc.

Since I run for data (working for a watch company), I spend even more time analyzing the data from the 4-10 watches that I wore on the run. I also spend quite a bit of time cleaning up OSM issues after my runs. Some towns have had very few issues and others I have had to make multiple edits after every run.

I don’t feel like I spend that long planning my run. But recently feel like I am spending more time driving to my run. I run everyday so I have an idea for my 1 mile days (go run dead end runs I missed) and then I work on a section at a time. I plan out 2 to 4 runs at a time and usually always just do navigation now.
Where I am currently running also requires almost daily OSM edits. The current city was drawn terrible and there was streets that were not even there. I looked at the whole area with satellite view and fixed several poorly drawn lines. So spent a good 1-2 hours working on it.
But I run usually 4-8 miles! Almost daily. So I think I doend alot less time planning then the nourish daily I run.

Agree with Missie and Scott - my prep is pretty simple (look for nodes & missing purple lines → plot route), but my post-run is more time consuming. I love discovering new side streets missing from OSM, new footpaths that loop around connecting dead ends, etc. so I’ll typically snap pictures as reminders and update OSM when I get back. Meanwhile, my GPS quality is routinely terrible even with my new Garmin Fenix 6, so I will ‘clean up’ my trace to plot what I actually ran, usually doing this with RouteConverter. Lately I also have big gaps in my gpx trace where the signal dropped out entirely, so to add in new nodes I will do an additional post-processing step to add in missing sections in Runkeeper. It’s time consuming but it’s a labor of love and I’m extremely satisfyied with how my LifeMap looks

I only run once (occasionally twice) per week and try for 15-20km and that’s usually 30-40 streets. Having completed a City (technically a Borough of London) I’m now at the point where I have to drive or take the train to an adjacent Borough - so when I travel I want to make sure I don’t need to go back.
I plan in Strava then upload that to my Garmin 245 for navigation (although it can only cope with the first 50 data points…). Strava takes a few more weeks than CS to suck up changes from OSM, so I’ve been working on OSM quality across my new borough/city so that hopefully when I plan future routes it’ll be accurate enough to allow me to plan correctly.
I check satellite images, local council maps and streetview to make sure my route picks up everything I need to. The last thing I want is to expect to turn left then find it gated off - then have to re-plan a route on the hoof.
Once I’ve done my route I’ll usually have another 15mins of updating OSM based on observations from when I was out.
I guess actual planning for one of my runs takes c.30mins, then I’ll be running for c.90-120mins so about 1:3. But if you included all the OSM editing then my computer time is far in excess of my running time!

The Fenix 6 is surprisingly bad for GPS point accuracy, especially for such and expensive watch. The Forerunner series have better antenna tuning with the 945 being the best I have tested with the 45S, 245, and 645 all being good as well (and significantly better than the Fenix 6 Pro).

The GPS fidelity is extremely disappointing but I’m satisfied with all other aspects of the watch so far, and I was already in the habit of fixing my gpx post-run so it is what it is.

Strange, i never had any gps accuracy problem with my fenix 6x since i have it on my wrist

Just to build on the conversation as well as show what my pre/post look like, here’s a 20 mile run from Sunday. Left is raw gpx that my Fenix 6 sent to Garmin Connect, right is what I uploaded to CityStrides after my process described above. The raw is ‘shorter’ by about 1.5 miles because of the signal dropping out for 3 big chunks of miles 1-6, but there were no more gaps after that. Because of the scale you can’t really see the fine detail, but in small looping sections like mile 6-8 or 15-16, the raw is very inaccurate. I guess the latter is the point accuracy @Scott_McClure is referring to, but I have an average of ~2 times in each of my runs where the GPS signal drops out entirely (I only know when I get home, the watch doesn’t notify me). 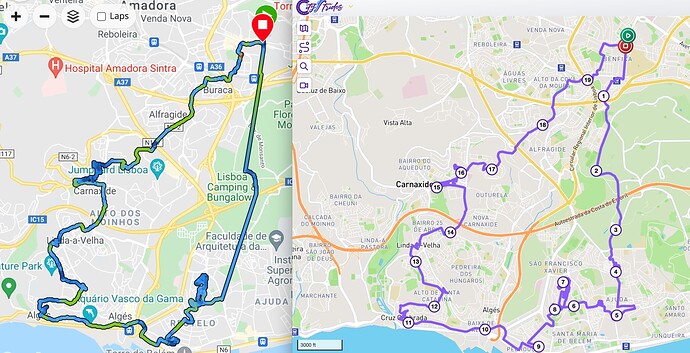 Interesting. Are you looking for a new job? That is exactly what we do for testing GPS point accuracy: We create super precise maps of any of the courses we use for testing and we have a tool that we developed which allows us to take the data file from a device (GPX, FIT, TCX, etc.) and run it through to see the point by point accuracy. We assess for the percentage of points within 5m, 10m and 15m of the actual position. For an open sky course we expect a well functioning device to have at least 50% of the points within 5m of actual. Our tool shows it graphically with green being with 5m, blue being within 10m, yellow being within 15m and red being over 15m.

Your losses of fix concern me though. We had one Fenix 6 which suddenly started showing drop-outs and even though it was 2 years old, when I called Garmin they were willing to replace it at no charge (which made me think it was a common issue). 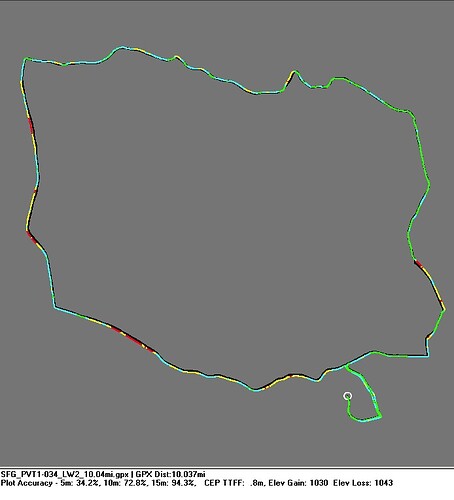 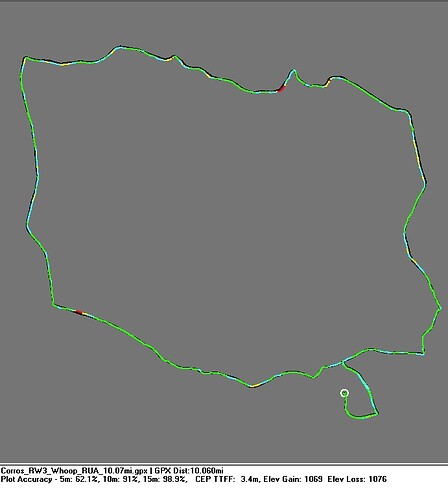 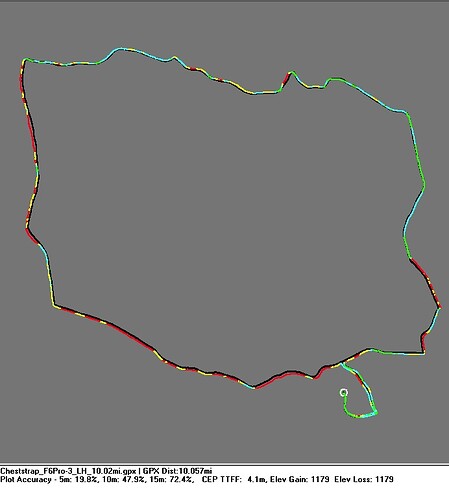 Would be interesting to see how Fenix 7 SS performs, with the multiband GPS!