OSM edits not making it into CityStrides

I’m creating this post as a way to (hopefully) make it a little easier to find out that I’m working on it.

The basic idea is that I have to build a way for changes in OSM to make their way into CityStrides. I have all the server software required for this in place, but I haven’t written the code that actually does the updating.

So for now, your fixes in OSM aren’t making it into CityStrides. They eventually will, however, so your edits are not in vain.

The "Update this street" feature thread also has a piece of this conversation. It’s also mentioned in CityStrides Roadmap (updated 2020-04-23)

Not sure how to fix this problem:

Edgewater Drive, Waltham, MA - The last 6 nodes are past a gated private driveway. I edited the road in OSM a while ago to show where the public road actually ended. The private driveway secton is now gone in CityStrides, but the nodes remain and thus the street remains incompleted for me.

Burns Road, Lexington, MA - There is no road where CItyStrides shows there’s one. I edited it in OSM and the road has disappeared, but the nodes are still there.

Can you delete the nodes from these?

There is no update functionality within CityStrides yet, so your edits in OSM are not making it into CityStrides.

It’s mentioned in CityStrides Roadmap (updated 2020-04-23) … but I haven’t have a dedicated thread for it, because it’s just up to me to get the work done - there isn’t a whole lot to discuss.

I’ve searched the forum and am not sure if this has been covered elsewhere, but what does it take and how difficult is it to import and update a city’s street list in CityStrides? Or if a full street database update is too onerous, is it possible to update (but not delete) individual streets? I am an active OSM contributor and since the last update, I have added some new streets to Vancouver, BC and have edited several more in hopes of addressing the issue with streets overlapping Vancouver and Burnaby. Thanks!

The data update process isn’t built out yet.

There’s a rather unhelpful note about it in CityStrides Roadmap (updated 2020-04-23) but other than that, there are just some small conversations here & there throughout the forum.

A sort-of related query that hopefully a skilled OpenStreetMap person can help with: I’m an active OSM contributor and have been slowly, methodically pecking away at improvements, etc. there, looking forward to the eventual update at CS. But there are a couple of things that I’m not sure I get.

No OSM expert, but in history it looks like it has been changed 5 months ago ?

Changed there, yes. And from street to house/building. So all is good now. But that doesn’t explain the CS import. that was with the building correctly mapped

It might not have been. The change date is October 10 and I started the global data update in September. It’s possible that the data in CityStrides is now 5 months old.

Do you know when the CityStrides site will be updated from any updates made in OSM?

In case anyone is wondering why (their) OSM edits do end up on one’s LifeMap, it’s because (per @JamesChevalier) the LifeMap uses Mapbox to draw the map, and Mapbox is (apparently) pulling in updates.

I was quite surprised when an OSM edit of mine (new streets) showed up on my LifeMap. Not the street names in the CS DB mind you, as that’s addressed in this thread.

I recently figured out that it’s possible to use overpass turbo to get an idea of what an area would look like with the current map and query. My city was part of the first batch to be re-imported as part of the map data update back in Sep 19, and the query has changed a bit since then. I run the query to avoid missing streets that will be included once OSM data is updated. It’s also handy for checking areas that need zooming out to the extent that the node hunter returns the >1000 nodes error message.

It’s also possible to use this to see how any changes made in OSM will (eventually) show up in CS.

edited to include simple link to complete query

Now that is a cool link to check the most up to date OSM edits. And it helped me indentifying edits i forgot to make after a run. private tagging or foot = no tagging.

I def gonna use this one, thanks

@8f7162110d9eeaf907ab I’m getting several little pink circles on the map after running. Any idea what they mean?

So rather than start a new thread, I marked “Redruth Gardens” (my nearest street not yet done) as Private on OSM as it is behind a gate which never seems to want to open for me to nip in

It now seems to be coloured the grey shade (not white) to show it as private but it still has nodes associated with and the 2 furthest from the gate I have not been able to get near enough too.

So if I mark this as manually complete and later the nodes properly disappear will this eventually be deleted from my “score” ?

Yes. When the CS update feature gets developed, we as users can expect any changes to either get added or removed from our completed streets count as far as I understand what James is going to be going for.

@tim1, my strategy is going to be to run my city to the max, before resorting to any manual updates. Along the way, I will make OSM edits to add new streets (Keller is growing), and mark the ones private that are.

I’m curious if I will ever get “credit” for the new streets I have run, but until @JamesChevalier works out the update process, I’m content to keep running streets CS knows about.

And I’m curious what will happen when the private roads are marked as such.

Also, I run a lot of extra miles because OSM does not “know” the actual end of the street at the city boundary. In that case, I run a few extra miles. I’ve had my wife drop me off at the end of a few long roads, and I’ll run home from the there. I just did that here: Eric Wes's Activity on July 21, 2020 - CityStrides

Or I’ll get a drop off at out of the way roads, and arrange for a pickup: Eric Wes's Activity on July 20, 2020 - CityStrides

Thanks for all the work on this! Now that I’m approaching 100% for Arlington, VA I’m starting to find little things - mostly restricted areas. Big glaring one is that the corridors inside the Pentagon (5 Rings, 10 Corridors) have nodes in CS. Oops! I fixed in OSM thanks to info here, but hopefully we can correct those. Also a few odds and ends next to military areas where access is no longer allowed.

Looks like some of my edits have made it into Mapbox, hooray! However, there are some olds nodes the are still present. Does anybody have an idea how long these will remain? Here is an screenshot of 2 of them. Elizabeth Jordan St is a strange, weird alley, while the node just north of Felicia street used to include a street (30th).

It seems that if it has a name in OSM, it’s a street is CS- is that about right? In Nashville, Tennessee, there are a number of alleys which are named and appear in CS. 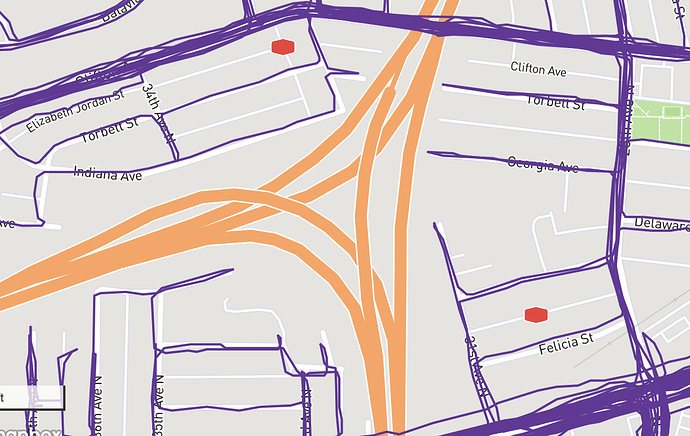