I was interviewed for a local paper Herald Journal in Minnesota. Another CityStrides plug! Here is the article. 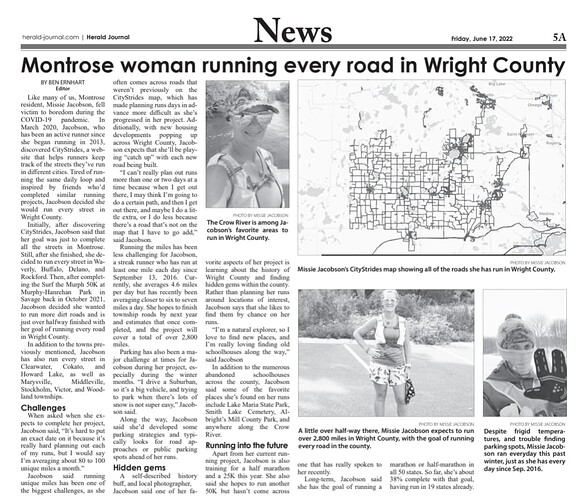 That’s awesome. Congratulations on your achievements! Very positive.
My friends have taken to try and find me on my treks, it’s a game like Where’s Waldo or where in the world is …

Very cool feature! I’ve seen your name on the Wandrer.earth leaderboard the past few months since I joined in February. Well done!

I doubt anyone will be out looking for me…its all very rural area!!

Oh yes I joined that too. Helps me find missing roads that I might have missed but mostly ones to fix in OSM. But CS is by far way better!!!

Nice article. I’m doing a very similar project over in Washington County, MN. Original plan was to run all of Woodbury, now I’m onto Cottage Grove/Newport/Afton. I suppose we’ll see how far I get on the full county. Good luck on finishing off Wright County.

Oh You got some hills in that area! But my guess is also alot of rural areas too. I made a spreadsheet with each city and each township. It helps me get an idea of how far along I am. So I highly suggest doing something like that. I can post a screenshot or share the link if you want.

I did get interviewed for another local paper last week, So will be interesting to see that one on Thursday.

Yeah, I’d be interested in seeing how you track your total county progress. I have Wandrer as well but not all that impressed, to many sidewalks and such for it to show the % complete in a city/county accurately for streets. Maybe an enhancement request someday for CityStrides to add % complete for counties/states. When that next story comes out you’ll have to post it!

Yeah not impressed with wander either. If you run both sidewalks you still dont get credit for a road unless you run down the middle…very unsafe.

Here is a SS of my spreadsheet. Green cities are complete and red are unfinished. Obviously miles finished is not correct. It only adds those when 100% completed. But with so many cities its alot to keep track of.

Wandrer is really tough! After I had finished my hometown Lidingö in CS, 218 km, I tried wandrer, it took me a long time and several reruns to get all 430 km! And yes, many roads where I had to run early Sunday mornings to be able to run in the middle of the street😁. And then som path and trails that were drawn incorrectly in OSM, so I had to run straight through the bush to match this incorrectness. Won’t try to complete any other cities in wanderer, sticking to CS and StreetFerret now

IMO, Citystrides is hands down the best for working on completing streets in towns/cities. After 2+ years of completing streets, though, I am more into my Life Map and I love Wandrer’s map for a variety of reasons. I probably spend more time on Wandrer just for the map. My dream would be Citystrides and Wandrer getting together and combining the best of both.

I love Wandrer’s map for a variety of reasons

Can you elaborate on this?
The text form here in the forum includes the ability to upload images, if you’d also like to share screen shots (especially since it might be easier to show & add small comments than explain the whole thing)

Adding to my comment on wandrer: There is one aspect where wandrer handles thing better than CS, and that is where streets run parallell and close together. In CS you may often get credit for both even if you just run one of them. In wandrer this cannot happen. It checks which road is the closest to your run, and you get credit for just that road. Mind you, if your GPS track is a bit wiggly, you might get credit for first one stretch of road A, then a piece of Road B, then back to road A, but to complete both roads, you have to run them both

I think the only thing about wander that is better is you can click a button and see roads you have not ran. So for me if its to the end of a city I use that to see if I missed anything…or if I forgot to do some OSM changed. But the wander map doesnt include anything that not a set trail or street. So I found it missing a ton of trails that I have hiked/ran (state parks). So my life map on there is not as accurate. Plus it takes like a year for it to update changes. 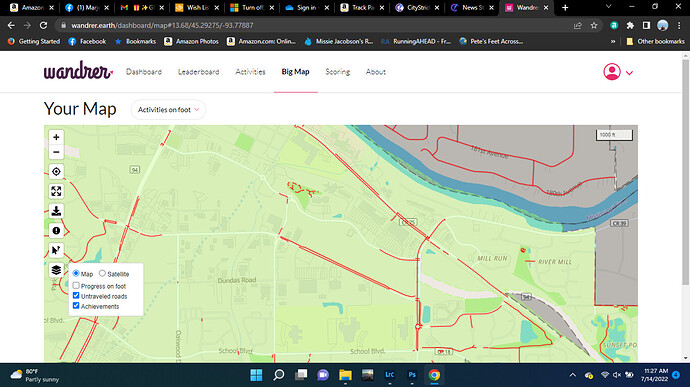 Here is a screenshot of the map. This is just what I have not ran. But The road close to the river on the south…I ran the sidewalks both side and still not complete. Not going to redo and run down a median with trees.

I end up using Wandrer’s map similar to what Missie’s screenshot shows. I always find myself filtering down to the untraveled roads. The locations I’m running though often have sidewalks on both sides of the street so to complete per Wandrer’s standards I’d have to run the length of the road multiple times, it frustrated me as their GPS algorithm to compare my tracks is often too finicky so there are always left over spots. I much prefer my LifeMap. Maybe one suggestion I would have to add to the LifeMap/CS overall is related to Missie’s story. A way for CS to track progress of all the streets in a county.

Here is the article from the other paper! 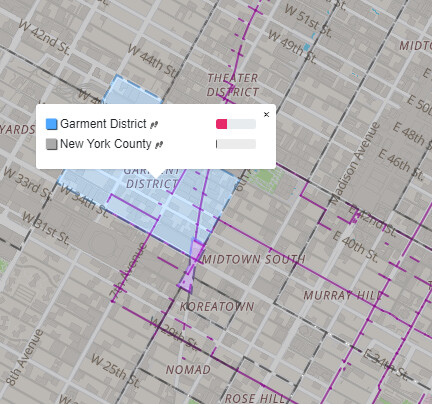 What I like about the Wandrer map is the color coding based on percent finished and when you click on an area you get a percent done from the specific area to the county level. I also like how whatever algorithm is used smooths out your run so when you like at a city like Manhattan, you aren’t cutting through skyscrapers.

Anyway, it isn’t perfect for reasons others have given and I certainty don’t consider it anywhere on par to CityStrides when working on completing all the streets in a given area, It is just a fun map to use to explore and have new goals based on how it gives you things like state parks and all the little areas in Manhattan; for example.