Hi folks. I just signed up, and started my Garmin synch, but I’ve noticed that, even with a lot of lines in my ‘lifemap’, there aren’t any completed streets.

Can someone help me figure out what I’m missing? 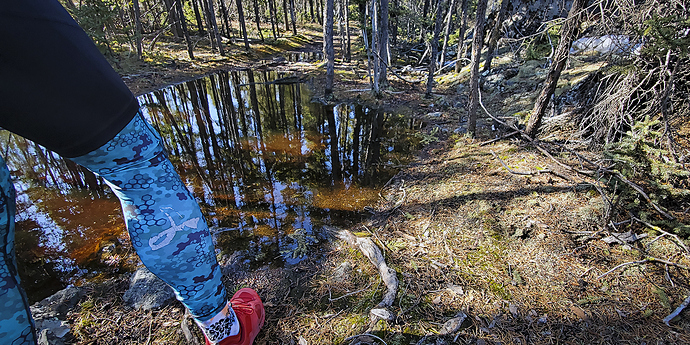 Does 3 hours delay seem to line up?

I started synching last night, so have been asleep longer than that.

My ‘lifemap’ shows lots of activity, but it still registers 0. I don’t mind starting again if I have to, but I think some should have been completed already, in my Garmin history.

No no, you don’t have to do anything twice.

Share your profile link (in the top right menu) and I’ll take a look.

Oh! Also - search in Cities - CityStrides to make sure your city is present in CityStrides

I’m pretty certain my city isn’t in your list yet. No hurry, I’ll just practice in the meantime.

The city is Yellowknife, NT.

Let me know if I can do some part of getting it added. Thanks, @JamesChevalier

This looks massive, is there a smaller city boundary or is this what you’d expect to exist in CityStrides? Relation: ‪Yellowknife‬ (‪9476822‬) | OpenStreetMap

When you say ‘this looks massive’, it seems odd to me. It’s a small enough city that a half-marathon could nearly circle it.

I don’t know if I understand ‘city boundary’ clearly enough to satisfy a nerd. If such a nerd is asking, I have a pal who is an engineer with the City, who may understand the definitions more clearly. For what I guess ‘citystrides’ uses, it’s ‘streets, not highways’ and ‘no private property’.

So the yellow circle, is the Yellowknife River Day Use Area, and has Municipal Enforcement Officers able to enforce by-laws, so may be ‘in the city’. I ran out there (along a chunk of highway) so that may disqualify it. There are a few homes out there.

The yellow square is the ‘Giant Mine Boat Launch’. The mine had a townsite (contaminated/closed now) and that few kilometers may or may not fit into ‘Yellowknife according to Citystrides’.

The red squares are recently developed, with mainly industrial/commercial use. The NWTSPCA is out there, and ‘Deh Cho Boulevard’, which looks like a highway, has a lovely trail along side it, so that people don’t have to run the highway, for the most part.

Grace Lake has been recently developed with residential properties. I haven’t run down there much.

Would it help if I outlined it in a route-planner? I used to use the free strava one, but they don’t enjoy freeloaders as much these days.

Sometimes OSM links get weird - here’s a screenshot of the boundary that I see. 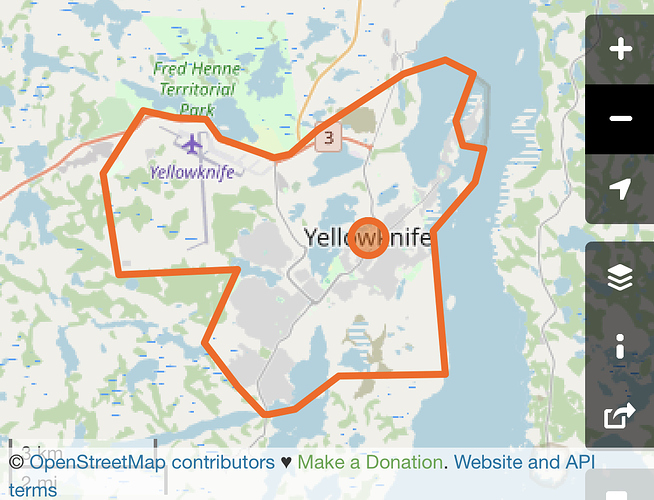 This looked like a very large area of land, but the zoom level might be messing with me.
If this looks like the city as you’d expect to see it on a map, then I can import it.
If you’re expecting a smaller area (within this county that’s also named Yellowknife) then I’ll need help (and can message them directly for it).

Let me know & thanks for working through this with me - this OpenStreetMap stuff isn’t always the easiest to work through.

That does look as I would expect to see it on a map, mostly. I’m very new to this way of thinking though.

I don’t know what ‘OSM’ means yet, for example.

Thanks very much for looking into this so quickly, @JamesChevalier

To help (i hope) OSM is a short term for openstreetmap. The free geographical dB of the world. James Chevalier used the OSM dB and filtered in all the streets that are potentially runnable, and worked this into this cool site called citystrides (also named CS a lot in this forum).

Also administrative borders of a specific type that determine cities and towns etc. are imported, to determine if you run a street within the borders of a specific city.
You upload a gps registration of a run or walk and the track will be compared to the geo spacial match of nodes (the points(begin-, end- and intermediatepoints) that determine a street) and flag all nodes. When you get 90% or more of the nodes of a street, it is flagged as completed.
This way the servers of this site decide if a street is run and to which city the street belongs.

I agree, the city border for Yellowknife doesn’t look big/large. I see it’s admin level 6 in OSM. Could be that James is using another admin level for deciding if it’s a ‘valid’ cityborder to import into CS.

There should be a lot of info around on this forum, there is also a wiki started, so have al ook there.

I’ve noticed that it seems to have added some streets for me, so Yellowknife might be added. I noticed that the ‘Dettah Ice Road’ is included, and wanted to share that it might not be very consistent.

I created a strava segment a few years ago, and the following year, running the road didn’t register on it. I think it was made in a slightly different spot.

Still waiting to see for sure if Yellowknife streets are checking off. Thanks again, @JamesChevalier

Thanks folks, it looks like I have 167 streets completed. Now I’ll have to figure out how to use the site to find the missing bits.