I just pushed out an update that overhauls the design. I still see a lot of improvements that can be made, but I like this overall look and feel a lot more. Let me know if you notice anything that looks off or is outright broken. 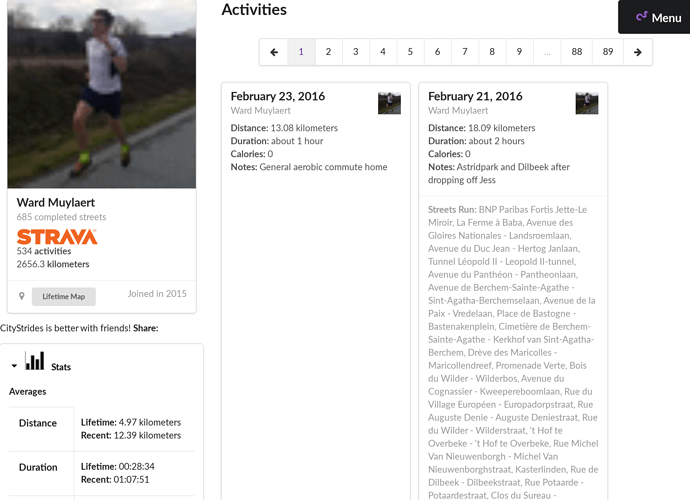 All in all not really a fan of the design anyway I think.

Thanks for this feedback! This was really helpful - I appreciate it so much. I think I’ve fixed up all the issues you reported, but let me know if there’s anything I’ve missed. Maybe someday I’ll be able to afford a designer who can make the site actually look nice.

Profile picture looks all blurry (it took it from Strava, if that matters)

Yeah, it looks like I was using a smaller Strava image. I just updated the code to use the full profile image instead of the smaller version. That won’t take effect until the next sync, though.

The ‘Sync Now’ option is now in the menu. I’ve since updated that, so you’ll find it near the top of the menu - those items are in alphabetical order under the ‘Account’ section.

I just updated those so rather than displaying the list of streets, it displays the counts for completed/progressed.

Streets in activity in profile view are aligned at the bottom in the case of previous bullet, looks weird

I think I cleaned up the Streets in activity in profile view, but let me know if there’s still an issue here.

Not a fan of menu opening on hover. I seem to expect to have to click since there is a small delay. Of course at that point the menu has opened and I accidentally click Home instead.

Having the menu open on hover was a bit of a guess for me. I found that requiring a click each time was a bit much, but I might be using it a lot more than others…

To close the menu I then do have to click.

Ugh. I thought it was possible to close the menu with the escape key - I was wrong! I don’t know how I missed that. I just switched the menu over to open-on-click. I’d love to hear everyone’s opinions on this as far as which one is preferred.

I only use citystrides to look at my own heatmap and cities, yet the link to my profile is way down in the menu, even requiring scrolling on my laptop.

I updated the order of the menu to put your most useful links up top.

The one thing I would like to have is easier access to the percentage complete for an individual street, as well as the button to flag a bad street. If I click on an activity and then click on a street, I really like that it zooms into the street. But it would also be nice to have the % complete and flag button show up at that point instead of having to click 2 more times to get to the actual street page.

I like the new look of the running maps. It’s so much easier to see the the trails show up on them.

I have discovered one issue: When I click on a city, the toggle “Lifetime Map” button doesn’t show where I’ve run in and near that city.

The new maps look outstanding but unfortunately they don’t work on my Linux machine running Debian 8 (both Chrome and Firefox). They work fine on my Macbook.

That’s weird! According to their blog post, it’s supposed to support Linux. They claim that “Mapbox GL JS is available on all browsers that support WebGL”. Do you think your Debian install is lacking GL/WebGL support?

Yep WebGL seems to be the issue. I’ll email my network admins and see what they say. Thanks!

The city view has an issue where you cannot see the runners etc depending on the width of the page. For example like this: 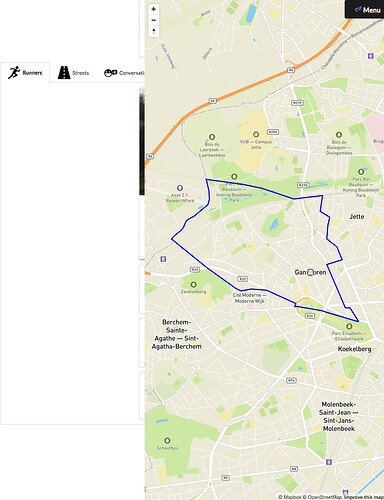 It does not happen on all widths, but just resizing your browser window should trigger it a few times.

Hhmmm…
Maybe I should flip the layout so that the map is on the bottom and the content is on the top… That would make for a consistent mobile experience, too (right now I do this funky tab thing).

As the main goal of citystrides is to try to complete all the streets in a city, I would put the “Cities” tab first and open by default on the user profile.

On the main page of the site I would also put forward the best completion rates of the month or the runners that completed the biggest number of streets in the month (or something similar) rather than the fastest paces and distances. 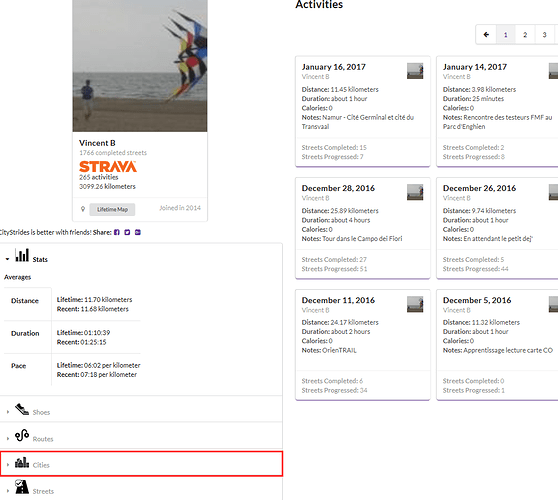 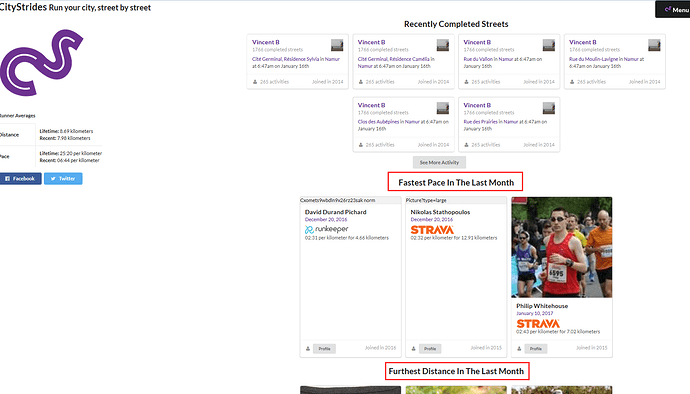 Great ideas! Thanks for sharing!
I’m about 90% done implementing them.

The code I’ve written for the “Most Completed Streets In The Last Month” list is pretty slow, but it isn’t run every page load so that shouldn’t hurt too much…

While building this, I found that there are a number of people out there finishing hundreds of streets per month! If this went live right now, the top 3 counts are 346, 314, and 270!

I can’t release it yet, because I also need to rebuild my job server. I’m hoping it’ll be worth the wait, though - that thing has been flaking out a lot lately. I’m hoping to finish this up this week, but scheduling might be tight … I’m trying to brew a batch of beer right now, so one of my days this week is going towards that.

OK, I finally got this released - there’s a new row on the homepage with the top three runners that have completed the most streets in the last month: https://citystrides.com

I think I avoided skewing this for new members & new city additions by focusing the query around Activities within the last month … So, even if the site suddenly finds a ton of completed streets for you - the completion would have had to occur within one of your Activities within the past month.