First of all, apologies, I tried to follow the “How to help with Country Import” but it appears that “nominatim” updated the layout of their search result page and I can’t get/find to the “City” info for the “City Admin Level(s)” column (also, the “Parent Of” seems to have been removed from view). However, I was able to update the “Region Admin Level(s)” column, I updated it to “2” since that’s what was listed (country: Philippines).

Yeah, when viewing a ‘city’ in Nominatim the “Parent Of” section isn’t relevant because there’s nothing ‘below’ the city (since the streets aren’t listed in this page).

This section can be confusing & sometimes incomplete.
It sounds like you’re saying the Region is “NCR, Fourth District” in that screen shot.

)?
After I determine that, I’ll have to figure out what the admin level is for all/most cities. Makati is admin level 6, but usually I see cities at 8. I can run some queries to get a couple lists for you after I’m sure of the Region level.

Update: I’ve done some searching, and it does look like cities are admin level 6 all around.

I’m following up on this, @jcjohn.sesecuneta
The open question is whether the Regions should be admin level 5 or 3, from those lists in the previous post.
Thanks!

Apologies for the late reply.

Yes, it looks correct, as far as the hierarchy is concerned. Though the NCR “districts” are not really used outside of the Police, Fire agencies, and emergency/disaster response teams. But for the purposes of how it was recorded in OSM, it is correct.

The official regional name is “National Capital Region”. What is listed in OSM as “Metro Manila” is not the “region” name. However, for CityStrides, “Metro Manila” is fine for the label (Admin 3). Since even locals are confused with the NCR “districts”, probably good not to use it.

However, for regions outside of NCR / Metro Manila, the region names are rarely used in daily lives.

Maybe in the future if there are requests for other cities, the Province name would be the best fit as a grouping.

It would be then like this frontend
I. For NCR / Metro Manila:
Regional name: Metro Manila
City/Municipality: Makati City

Hopefully it is reflected similarly in OSM.

Apologies, I am still confused about what data should be used.

It sounds like you would prefer the Regions that I use be the Provinces and not either of the other two lists I provided earlier.

Does that look like the correct list you’d expect to see?
It does seem to line up with Wikipedia: Provinces of the Philippines - Wikipedia but I only checked a few.

Just acknowledging I read. I’ll try to get help from the OSM PH team, I’m confused too with the way the NCR region was encoded.

I think I understand now how to use nominatim, and it does appear all Cities are Admin Level 6.

If I’m understanding this correctly, for the Philippines:

When I checked randomly as well as specific Cities, everything appears to be consistent. The only difference are the Cities in “Metro Manila”/“NCR”.

For the following “Metro Manila”/“NCR” Cities:

All other cities/municipalities are grouped under their respective Admin Level 4.

You can follow along here: Philippines - CityStrides it’ll slowly fill up with cities

It looks like Makati was not included somehow. I looked at its Wikipedia page and in the right column it mentions “Province none (Former part of Rizal province until 1975)” so I wonder if it is not included in any Region at admin level 4.

If I understood @jcjohn.sesecuneta correctly, Metro Manila/NCR (which includes Makati City) is an exception with Admin Level 3 instead of 4. It might be necessary to import it separately.

Yep, the cities within Metro Manila/NCR would be Admin Level 3, since that one has the correct name for the region.

Hmm… wait … I think the disconnect is I’m coming from the “end-user” label/categorisation verses OSM/data.

I’m deeply sorry for the confusion. The OSM “NCR, First District” etc is throwing me off. We don’t use it in real life other than the police and other emergency response teams, for the rest of us it simply is “NCR” or “Metro Manila”.

I think using “NCR, First District” etc as the label should be fine. No need to adjust the code or something. It’s probably time we familiarise ourselves with it.

Would it be better to use Metro Manila (admin level 3) instead of NCR, Fourth District (admin level 5) as the Region?

I’m a little confused because you seem to be resisting “NCR, Fourth District” a little bit & you’ve mentioned Metro Manila a couple times.

Thanks for working through this with me - this stuff can be tedious sometimes!

Would it be better to use Metro Manila (admin level 3) instead of NCR, Fourth District (admin level 5) as the Region?

It looks like Makati was not included somehow. I looked at its Wikipedia page and in the right column it mentions “Province none (Former part of Rizal province until 1975)” so I wonder if it is not included in any Region at admin level 4.

Thanks for working through this with me - this stuff can be tedious sometimes!

No worries! I’m just glad we can work on it. Later on, I can start sharing to runners in the Philippines to check out CityStrides (and subscribe).

I think I’m safe to import all of them - it doesn’t seem like they exist in CityStrides already, so it seems like everything within Metro Manila is exclusive & does not also exist within one of the already imported admin level 4 Regions.
Also, visualizing the admin level 4 Regions in that area do indicate that Metro Manila is not included in those: 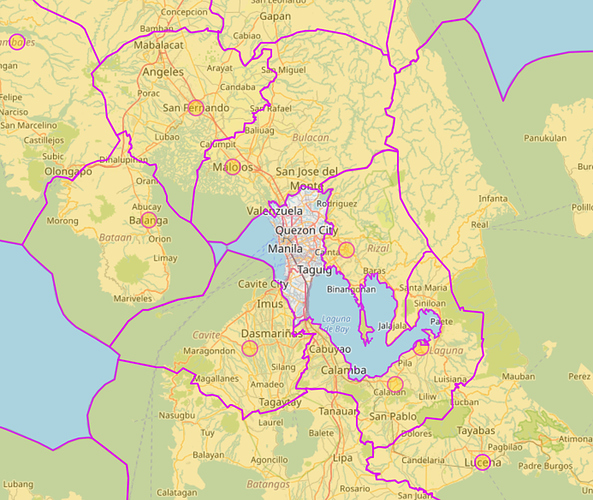 Thank you! A perfect time with the easing of lockdown, we’re allowed to run everywhere again.

Finally! Makati, Metro Manila - CityStrides
The entire region is importing, so it’ll take some time to:

Thanks again for working through this with me!

Thank you very much too!