My township is not in any city

Check out How to help with missing/broken cities/regions

Not sure I understand all that. Any way to import my area?

I need concrete and clear direction. Can you link to your city within OpenStreetMap?

if you can point me to a specific page in openstreetmap.org then I can at least start the work of getting it into CityStrides. I need a lot of hand holding because of how much coverage there is and understanding that I don’t have. 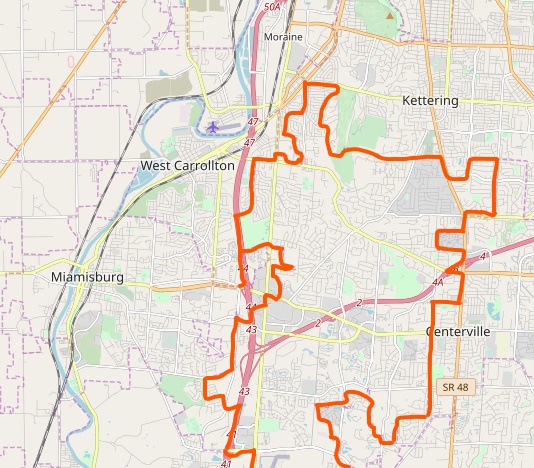 I see why the confusion. This area seems to have no name, and is defined only by the borders of areas that do have names (Moraine, Kettering, Centerville, Springboro, Miamisburg, and West Carrollton). Some maps show a “Shanersville” in that area but I’ve never heard any reference to it. I’m sure the weird boundary lines and lack of corporation have some political reasoning behind them. Anyway, would love to see how much of it I’ve run if possible. I’ll keep digging!

Can you share a link to whatever page contained that image?

Best I can do is coordinates

how did you get the border outline to display for your original image?

I cheated! I drew the border based on the outlying city borders. The area inside seems to have no label, and has a Dayton address.

Here’s something called “Dwyer” that seems to exist in my area:

It seems like that area should be half Miami Township and half Washington Township, with the boundary between the two running vertically roughly where the left 2 is on the horizontal highway in your picture. Unfortunately, neither exists in OSM, so someone would need to create the boundaries first…

Created a OSM account, may take a crack at it when I get more familiar.

This is all starting to feel a little odd. I’ve gotten used to fixing street issues in OSM, but the town thing still very much eludes me. Bar Harbor, ME used to be in CityStrides, but didn’t make the cut after the switch. Not a big city, but certainly a town frequently visited by runners. I went to look in OSM and there’s a tiger line file for the VILLAGE part of the town (not the whole town), but there’s no admin level tags at all. And a Google search for Hancock County doesn’t help. I would feel really odd assigning an admin level 8 tag to that polygon (I have no idea what the admin levels mean). Furthermore, none of the other towns on the island (Southwest Harbor, Town of Mount Desert, etc.) are in OSM at all. So it’s not even a matter of artificially assigning admin levels; it’s a matter of somehow finding the municipality polys in the first place.

All of which makes me wonder… how the heck did OSM get so unevenly populated in the first place? And

(I realize I have to correct the boundary data)

I know that for the netherlands (and maybe some other european countries) get their legal boundary info etc, from government institutes. They offer to deliver and keep updated the OSM dB where that government department is accountable for. So things like city boundaries and adressen, buildings, streets etc. I know some OSM whizkids/deep knowledge techno people have complex automated scripts running for this.
It can be that other parts of the world is not working that way. And of course it is a huge mission to make OSM working for the complete world concerning it’s all volunteering business

So I’m thinking of tackling this one and yes, there needs to be a vertical boundary separating Miami Township and Washington Township. All other boundaries seem to already exist for other municipalities. I have 2 PDF maps of those townships to go by. After that point, I’m kind of lost with the levels and whatnot. It seems that OSM would benefit from this new information if I were to add that boundary.

I just want to remind people that not every community has an actual legal existence. They may be part of the unincorporated county. Just because a bunch of people live somewhere and there’s a bunch of streets doesn’t mean that it’s a city.

The first step when you find a “missing” city is to ensure that it actually has legal existence. Is there a City Hall? Is there a Mayor and a City Council? To find the answers to these questions, call your local Board of Elections. If they’re not running elections for that area, then it’s not real. Or call the property appraiser / tax collector. If they’re not collecting property taxes for that area, then it’s not real.

No, I don’t know if the ones you’re talking about fit into this category. But my city has two adjacent “cities” that don’t actually have a legal existence: DeLeon Springs and Glenwood. Both have post offices. But both are part of unincorporated Volusia County. As such, neither exist as cities in either OSM or CS. And there’s nothing wrong with that.

(Post Offices are created as convenient places to distribute mail. The postal service doesn’t limit post offices to legal cities, and they don’t create a post office for every city. And ZIP Code boundaries are not city boundaries. Again, they’re just convenient ways to divide up the country to make mail delivery easier.)

(Addresses don’t identify whether a location is in a city. For example, according to the 2010 census, 494,593 people live in Volusia County. Of those people, 116,655 live in unincorporated areas. Their address will generally be the “city” of their local post office, even if that city isn’t real, or even if they live outside of the city boundary.)

Thank you for your reply!

Both of these areas have elected “Board of Trustees” and hold elections. They most certainly collect property tax but not any city tax.

The area seems to encompass anything within a rectangle that has not been swallowed up by a corporated city. Very strange contours and I’m sure it has a lot to do with money and power

I am currently downloading shape files provided by the county, hopefully I can make some sense out of those.

My main goal here is to not screw up anything on OSM, I am comfortable adding landmarks and fixing streets but boundaries and such will require more research on my part.

Hi there I have added my city Paisley,Renfrewshire,UK to the spreadsheet. How will I know if it has been added to the list of approved places?
Cheers
Graeme