I’m running in San Jose, CA. I’ve noticed that some streets are in the map, and they have nodes where they intersect other streets, but they don’t show up as completed/progressed. If I search for them in the San Jose city they don’t show up.

I’ve looked in OpenStreetMap but haven’t noticed anything different about those streets (but I don’t know anything about OSM).

What could be the problem? Thanks!

If you visit the page for San Jose: San Jose, California - CityStrides
and click the Streets tab, and search for the street names, most appear for me:

Nothing about either of those looks like they should have been excluded from CityStrides.

Thanks for looking into this!

Oops, when searching for streets I was typing just the start of the name and didn’t realize the search results returned several pages, as pages are 12 streets but my screen could show way more

For other streets, like Camino Ramon, I assumed that because the behavior was the same as with Dolores Dr or Santa Barbara Dr that they were missing. Looks like I got credited for that street in some past activity without actually running it because I captured the nodes at both ends and that street has no nodes in it. Is there a way to solve that “problem”?

What do I need to do in OSM to see where the nodes are?

Thanks for all the great work!

pages are 12 streets but my screen could show way more

The woes of designing for desktop and mobile views

I captured the nodes at both ends and that street has no nodes in it. Is there a way to solve that “problem”?

Not at the moment, though I do want to overhaul the code that decides whether or not a street is complete.
Right now I’m going point by point, checking for nearby nodes, and marking each node complete if you’re close & marking the street complete if you’ve completed enough nodes. I (think I) would prefer something along the lines of (I’m sure there’s much better terminology for this) checking each activity path to see which streets are run along - so, more of a focus on the entire path vs node-by-node.

What do I need to do in OSM to see where the nodes are?

@pedronavf:
i can try to explain the nodes and OSM.
OSM is in a sense only a huge dB with points/nodes/places on earth and the exact place is determined by satellite. You see your position on earth via this grid.by geospatial coordinates. This is the world wide grid that covers the earth, and gps machines like your mobile or smartwatch can register your position in any point in time.

To make maps in the internet via this dB of points/nodes, you tag these points and make relations between them.
If i position a point on the grid where in real life for instance there is a tree, i can tag this gps point in OSM as a tree. Each map renderer can now mak e a map and make a symbol of a tree on the pouint s that are positioned and tagged as tree, and so on for anything renderable. 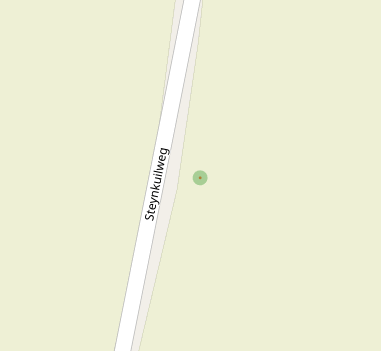 The green dot visualising a tree in he ODM standard rendering 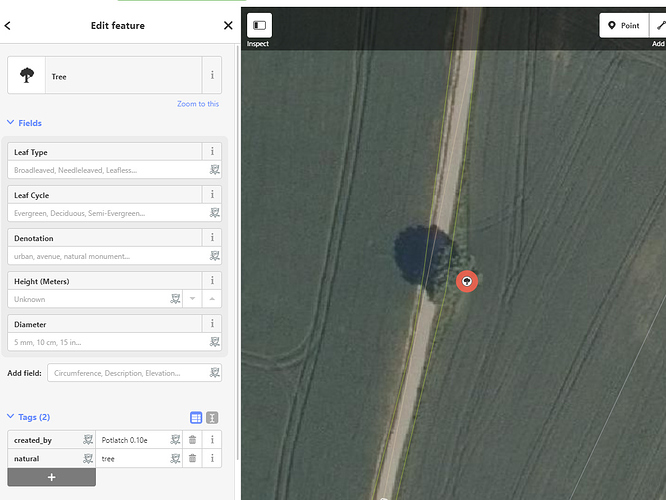 When you say a point has a relation with another point, a line between these points is created. This line can also be tagged. This can be a lot of things, for this site the most important tagging is of course all kind of streets.

image1622×705 297 KB
here is a street in edit mode, it has 9 nodes, the endnodes are grey, meaning there is a connection to another relation, another street on the right, and a track on the left side. The street is tagged as such and has a streetname.

To come to the point of your question: CS imports a bunch of points called nodes, filtered by the tags on a relation between points. The filtering of course is on all kind of streets. @JamesChevalier can elaborate on the details of the filtering.

There is a lot of info found ion the web, i can only encourage people to help maintain the OSM dB to give a good presentation of the world, free to use by everybody. It makes initiatives as CS possible.

To be complete, besides point and line, there is one more object drawn in OSM: area. This is a line between points but the difference is, it closes in an area by connecting the points in a circular way. This is used by CS by importing city borders.
Area’s are also used to draw buildings and ponds/lakes etc. It’s all about the tags one uses, that makes it visible via rendering on a digital map.

When you say a point has a relation with another point, a line between these points is created. This line can also be tagged.

Be careful the terminology you use otherwise you might confuse people even more.

An OSM way is an ordered list of 2 or more OSM nodes. Ways may be closed (i.e. the first and last node in the list are the same) making a closed polyline (e.g. a roundabout); a closed way is only treated as an area if it has applicable tags (e.g. building=yes, natural=water).

An OSM relation is an ordered list of OSM nodes, ways and other relations (e.g. trees with a water cutout, bus route).

I slightly concur. In my opinion, you create 1 of 3 different objects: a point, a line (a relation between points maknig a line as result) or an area (a lineair relation between points that is closed, forming an area). All three object types have their own tagging possibilities. A way is only a subset of tags in the OSM tagging for a line. A point or area cannot be tagged as way/path/track

I was trying to highlight that the OpenStreetMap data model isn’t as your describe, this isn’t my opinion but a summary of the documented OSM terminology and data model: Elements - OpenStreetMap Wiki

you are correct. I hope that my text still helps understanding OSM in the basis, without the very confusing ‘way’ objects. These objects are lines as anybody would describe them in a normal world. shame OSM calls them ways. Even an enclosed area is in those wiki called a way or polygon. Very confusing i tried to explain it in understandable ways.

But yes, you are right. I hope anybody more interested in OSM will read these wiki’s and can translate to the used expressions there.