There is a road missing in Locking, Weston Super Mare called Larkhill Road. It runs parallel to Merryfield Road and is the same length. It connects Woolvers Way and Anson Road. Please can this be added?

Looked it up and found this in OSM: 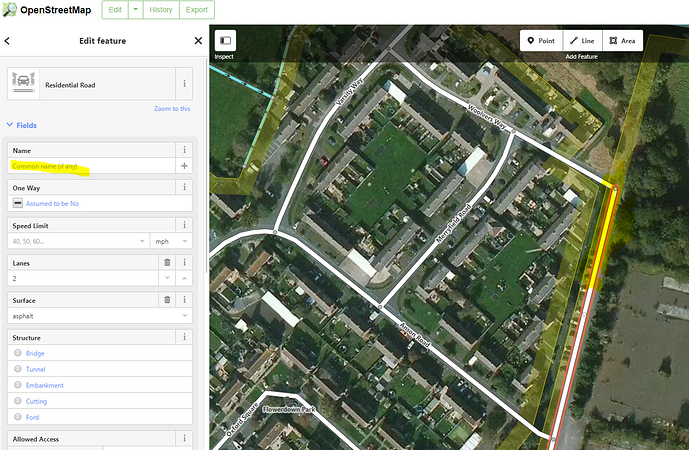 Looks like a new neighbourhood in development. This road on the right is the one i guess you are referring to.
It’s not in CS because the name of the road is missing in OSM. When adding the name in OSM, and James finds time to programm an ‘update CS from OSM’ thingy, the road will come to CS.

Yep that’s the road. It’s been there for years with no new development due on it, as a school is being built the other side of the fence.

I added a ‘note’ on OSM as couldn’t work out how to do it myself!

Addding a streetname to a street is easy enough, try it next time. Klick on ‘edit’. and klick on the street and fill in a name.

I did this now. 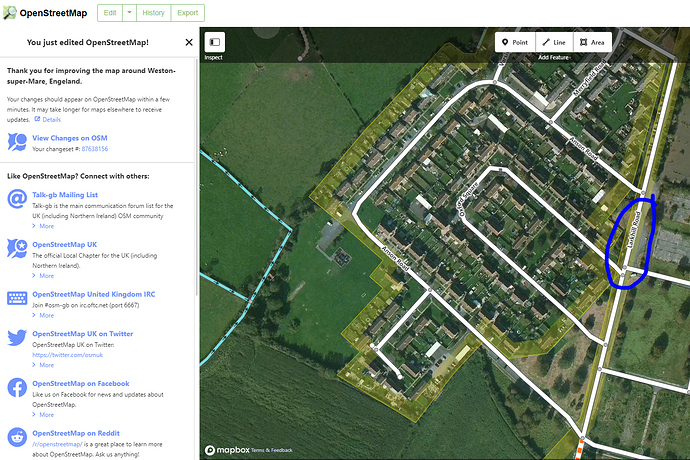 Question — on my July 17 run, I completed 2 streets that didn’t show up. They were unnamed on CityStrides. I went into OSM and edited them, and now those names show up on CityStrides’ map. But they don’t show up in my completed or incomplete streets list. Will they eventually? And if so, will my previous run “count” or will I need to run them again? Thanks!

Wow, interesting! a OSM change shows up in citystrides? that’s new. Is @JamesChevalier developing change import in to CS?

ah wait, no, you see the names in the map because the rendering of the map is updated via OSM but that is not James his code. To see the streetnames in de dB of CS, James needs to build an update function to get the changes from OSM into CS.

I am showing a street as non complete and shows up missing when I click on the map to view the street. I ran on the street a second time on 10/10 and the street is visible in my profile. The street is Fillmore Street in Jerome, IL. Stephen Pitsch - CityStrides

There are two separate issues.

Second, the streets (collection of nodes with the same street name) on City Strides. About a month or so ago the updating of the node and street information went to beta here on City Strides. (Beta means it isn’t perfect yet.) And then a couple weeks ago the cities were updated with the date of the last update from OSM.

The end result is that the visible map can change without the locations of the nodes changing. However, eventually both will be adjusted to match OSM.

@stephen.pitsch The important thing for you is so look at the update date for Jerome, IL. If it’s months (or longer) ago, have patience. The nodes will be updated. On the other hand, if the update happened recently AND the road is in OpenStreetMap but not as a completed or in-progress road on OpenStreetMap, then it’s worthy of being chased down.

Probably the first thing I would check is if the street is physically within the city limits. That’s an important thing to look at since everything on this site is organized from the city downward.