I was planning a run this coming weekend in the Broad Channel section of Queens (Way: ‪Broad Channel‬ (‪220798925‬) | OpenStreetMap). However, looking at the CS map, Broad Channel isn’t part of Queens (or any other city) which means it has no nodes: 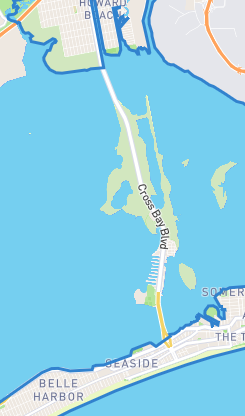 I think the border on Queens is incorrect on Open Street Map. You can see on the Broad Channel link it’s indicated as Queens. But as per your link you can clearly see the administrative boundary of Queens excludes it. I’d say with high confidence that the Queens boundary here is wrong (Broad Channel, Queens - Wikipedia), maybe I’ll take a gander at fixing the border in Open Streets Map. Will definitely be my biggest edit to date!

Once that’s updated, I assume nodes won’t be added onto the streets in CS since there isn’t a perfect tie between them?

I haven’t finished the update-data-from-OSM work yet, so nothing will update from OSM until then.