It should be Nodes-based, for the reasons Supermitch put forward.
Then, there’s two options:

I think most people are running to complete streets, so the second option would be most useful.
Perhaps a toggle can be made for option one, to cater for those who just want to run every node.

I agree on the nodes vs. streets for all the reasons above!

OK, I’m getting there … but I realized that I haven’t clarified one aspect of this.

I’m on board with the idea that this map should display nodes and that it shouldn’t display the street as a line (comparable to the individual Activity map).

My take is that it should be option 1 - nodes from unfinished streets.
(paired with this is a separate feature addition for the “90% is not enough” crowd: Strict Mode, where you must finish 100% of the nodes to mark it as complete)

I personally don’t understand the need for option 1.
Most of that information will be displaced in the ‘incomplete street list’

Option 1 is useful because I have a list of maybe 120 streets, spread out all over the city, and it’s a 20 km to run to reach each one of them. If I can’t see a unified view of the unfinished nodes, it’s hard to plan a route. Here’s an example of what it could look like: 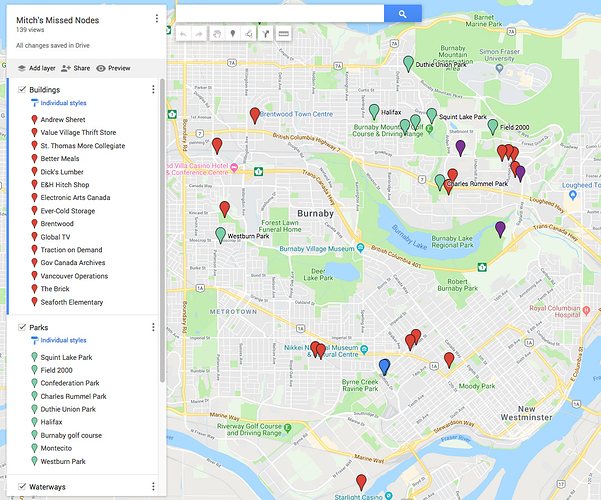 This map would be even better if it pointed out individual nodes. In most cases I am only missing single nodes, anyway!

The 90% node thing is a nice to have for the strict crowd, as you say. BUT until you give us an option to avoid the 90% rule, there’s not really much value in a “see missing 10% nodes”. I love the idea, but as far as ROI for new features, it’s much less.

Here is how I look at unfinished nodes:

firstly I explore sometimes which nodes belong to a street or building, sportfield, canal, graveyard, school, church, massive building or other ‘objects’

Second I always look at finished and unfinished streets and see then the unfinished nodes when I have run. Most of them I understand but sometimes there are unexpected things like 2 streets with the same name or nodes in the water, buildings etc. Thats gives me an understanding of the nodes versus streets.

When i have finished my city (and that will be ahwile with > 6000 streets I will eventually be looking at unfinished stees, nodes, impossible objects and impossivle nodes and flag them or maybe ‘bushwalk’ some

+1 for option 1. Nodes for unfinished streets only. The main goal here is to finish all streets (at the current 90% rate), and this feature helps doing that.
This does not exclude ‘advanced’ options:

Even if you could be looking at streets/parks/golf courses in an area and then multi-select which incomplete street’s nodes to show, it would be helpful. I have a bunch at Locarno/Jericho which are off the beaten path and putting all of them on one view would help me plan a run. Otherwise, I can only save screen caps and bring them up as I run. There are lots of data views that could be tested.

I thought I had a version of this that was ready to try, but in my first test I almost took the entire site down.
I guess I’m going to have to come up with some clever way to query a ~200million row table.

It actually turned out to be much simpler than it seemed. My original code was accidentally converting data types for the 200+million records and also trying to do the search at the same time.

So now the new Node Hunter feature is present on the LifeMap for any Monthly Contributor. I’ll be writing up a post for the #announcements category tonight.

You did it! But … it’s option 2, correct? All the missing nodes, even on completed streets.

This isn’t very useful to me; I need the nodes that lead me to complete the last remaining streets only.

Also, clicking the Node Hunter symbol seems to only load part of the set of uncompleted nodes; there’s clearly more that are missing.

Yeah, currently it is showing Nodes whether or not they’re attached to completed Streets … however … I expect to be able to update this tonight so the Nodes on the map will only be for (Edit: uncompleted) Streets. I’ll update the #announcements post after that is released.

Yeah, there is a 1,000 Node limit on the page. So if you’re zoomed out quite a bit in a way that’ll show more than 1k unfinished Nodes then you won’t see them all. There should be a warning popup that tells you this, though.

The warning about 1000 nodes is a bit off, it seems. When I zoom into my city and click Node Hunter, it shows me ~20 nodes in a corner of the map, and displays the warning. What probably happens is that it fetches 1000 nodes that would be outside the map, and displays a small section into view.
In other words: properly asking for only nodes in the viewport would help fix this problem.

If you go through that process… Zoom in, click Node Hunter, then see ~20 Nodes in the corner … if you then zoom out, are you seeing Nodes elsewhere that would have been out of view at the previous zoom level?

Also, if you have the time/energy, would you be able to share a screen shot of the ~20 Node situation?
(what a coincidence that my upcoming mixtape also happens to be named ''The ~20 Node Situation"

a this is a very nice feature. Sometimes i look at a street or field before i run/walk where the nodes are. One of the the problems is that that you can look aat streets but schools, churches, soccer fields etc are sometimes not findable or sometimes just not mentioned.
I am hoewever not sure how this feature works 100% correct. Is the restriction 100 or 1000 nodes?

Those non-street things shouldn’t really be in CityStrides. It’s possible that I’ve deleted them…

I also updated the code this evening to limit the Nodes displayed to those attached to unfinished Streets.

it looks hot, i mean cool

That’s AWESOME!
I’d love to hear your feedback on how useful it is / what could be better.