An idea I think could be good is an option to add a street to your map when you manually complete it. Meaning, if I click complete manually, my City map will also show the street finished with the purple line. I’ve wanted this feature because sometimes my GPS file will get corrupted and I have to enter the streets manually. But then I have blank spots in my map! Even though I’ve run those streets.

The purple lines are the GPS routes. This site has no idea what a street is physically, except as a collection of nodes.

Yep, the purple line is nothing more than a GPS trace. In fact, I like how this works, as it allows us to see exactly where we have been, even when we cut through parks to get to other streets.

But the site knows which nodes are in a specific street. It might be too difficult, but I think it could be a good feature

@mcintyre.sea You’re probably right, the site could “connect the dots (nodes)”, maybe in a different color?

So I have yet to use the “manually complete” option, and I kinda doubt I ever will. But even if I did, I personally would like my Lifemap to be nothing but GPS traces. I have a few streets that are “complete”, only because they are 2 node streets, and I ran the streets on the ends, thus also “completing” the streets. But, I never even set foot on the streets. I have been using my Lifemap to find those streets, and run them. I really do want the satisfaction of knowing I have run on every street.

If for some reason the street truly is not runnable (or walkable), I make the necessary change in OSM (OpenStreetMap), knowing that CS will eventually pick up that change, and adjust my completed streets accordingly.

I do not think I am alone in this rather purist approach. 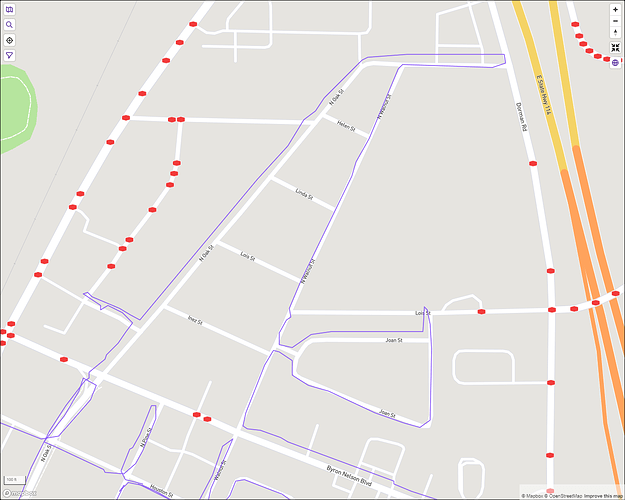 I think you could always create a route and upload the gps data as a manual run into strava/garmin/etc. instead of using the real but broken gps data. CS would sync it as a normal run and show the route on your map. Or am I missing the point here?

On Monday I did a 12.5 mile run in my city, knocking off 22 streets. I felt really proud of myself, until I noticed that there’s one small piece of a street that I missed, even though I got all the nodes.

Now I’ve got to back and run that one little piece. Luckily (?), I also found a sub development that isn’t on OpenStreetMap, so I’m going to run back there to GPS trace the missing roads. It shouldn’t be that far out of the way to run the missing link. Normally you trace roads from the OSM satellite picture, but the sub development is too new. So GPS trace it is. (Perhaps I’ll clean it up if the overhead visual is ever updated.)

There are many ways to cheat. Creating a GPS route is just one. You could also just turn your watch’s GPS on and drive the route, calling it a “run”. Or copy someone else’s.

@ericjrw wrote:
I do not think I am alone in this rather purist approach.

I am with you on this

Yes I definitely run all streets completely, regardless what CS says. I look at my Lifemap and make sure all roads and streets are done, I also mostly try to run the ”smaller” ways which are not marked, that is, probably they lack names, or are marked as cycle ways. And especially where there are larger areas without real roads I run path across just to ”remove” white spots from my LifeMap. Just finished my home town Lidingö which is an island suburb to Stockholm, 553 streets 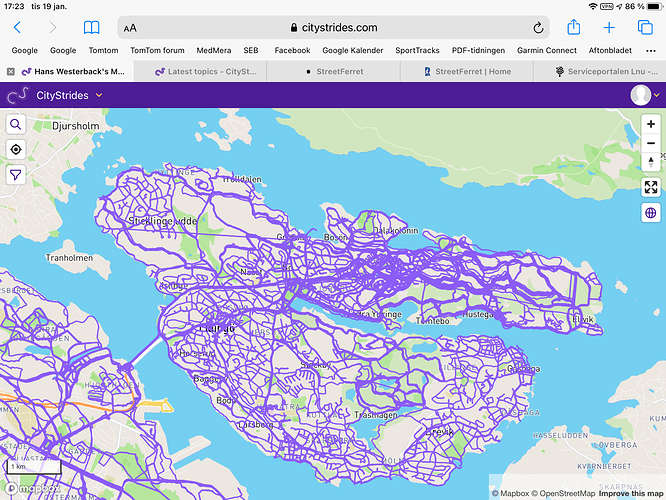 @hans1 There’s something about seeing traces over water that I always find cool!

I wouldn’t consider it cheating, when you actually run a route and do not hit the nodes due to technical issues with a GPS device. The point is “running a street”, not “having the best device and good weather condition while you do it”.

Same here! It is a hassel to find the red nodes, once a street hast 90% completion. But I think, if I can run a street 100%, I do not need the 90%-safety… Broken GPS data is still very annoying though.