Manual completion - do you use and why?

Everybody on here seems to have a slightly different approach to how they use this tool. Just out of curiosity I was interested in what reasons people use ‘manual complete’ for?
My list is:
Me missing a node (eg turning too early at end of a dead end street)
Road or part of road marked as private and scary warning signs about dogs! So I don’t go any further
Lanes at the edge of a city, I normally turn around when the houses stop - but sometimes the nodes go on further
Gated community / gated road (surprised to have found 3 in Plymouth UK)
Road too dangerous to run on - ie no pavement and lots of traffic
Back lanes with no houses in them - they’re sometimes named but I don’t always think of them as a street
Large junctions - might miss a node or two at a large junction - not safe to get them all
Two lane wide roads - might run one way down one side and collect the nodes, but not run the other side
GPS flake outs - we’ve all had these!
Confusion by me - on a lot of new housing estates they have these parking lots at the end of the streets - sometimes the nodes extend into them, but I often don’t run around the car park

Another reason is forgetting your watch but still running a route.

Also a good reason for the manual import feature. He was later able to piggy back on my run on Strava, but then it didn’t sync with CityStrides and he had to manually sync the that run. The manual sync was a handy feature, but had that not been there: manual complete to the rescue.

Have not, so far, manually completed anything. If it is REALLY impossible to get the node, then I’ve fixed it on OSM. But to date, I’ve had several occasions when I’ve lurked near gates, waiting to nip through as a car passes! I’ve been chased and told I’m trespassing in a private area of Windsor Great Park. I’ve gone and nabbed some roads without sidewalks which I suspect my wife would have had a nervous breakdown had she been aware of what I was up to. For me, I enjoy the challenge - if I can get the node I will

You are braver than me

Haven’t done any manual yet, normally I fix them in OSM instead. Had a bad experience last week when I planned a marathon route. Turned out that what OSM considered a runnable highway was not! 80 kmh,narrow sides, I had to run on the outside of a metal barrier on a difficult slope. I told this in a Facebook post, and distant friend remarked, ”yes, we drove that road, saw a crazy guy and wondered what kind of lunatic is trying to run here”. I guess I could have changed it in OSM to foot=no, but when I was there I had no alternative, there were no small side roads at all…

This is an interesting subject and I reckon opinions vary massively and are also subject to how critical you are of yourself completing it. Personally, I will only ever manually check a node if there is no other option.

I’ve had nodes appear in a piaza in the middle of a block of late. Nodes have no business being there so although I ran them anyway, they are a valid manual adjustment.

Personally, if I’ve not completed a street because I didn’t run far enough down a cul de sac or it if it was gated, or it was a long country lane with nothing down it for 2 miles before having to turn around and run back, I have to go back and do that section again. If it’s clearly someone’s property then no but if it’s still part of an official street, I get it done and make myself known if the opp presents it self. In my eyes when I get to 100% and I add up any “ahh fuck it” manual adjustments, I reckon they’d add up and I’ve not run every street.

One manual that I had was pretty much inside a Primark store. OSM queried my query which was odd given it was clearly not accessible so I annually adjusted it.

Good example of why some get a manual cocomplete! 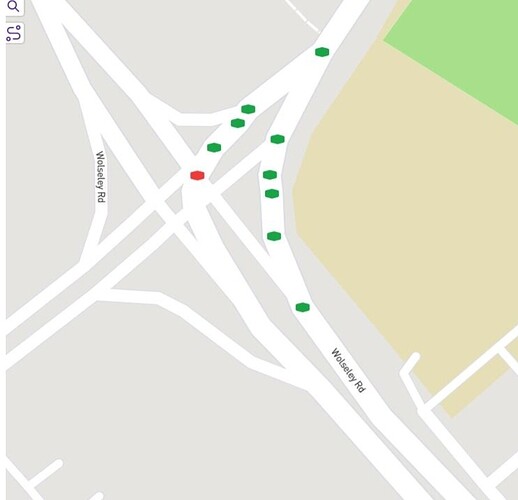 Or make that curve non runnable (foot = no) in OSM. That looks not runnable