I’ve mentioned elsewhere how I use routes while running with phone in hand to view my GPS position and stay on track. The menu, lifemap/profile links (this is really a lot of dead grey space, see pic), ‘streets this route will complete nodes for’, etc. don’t do anything for me except take up valuable real estate, collectively more than 50% of the screen. It would be awesome if the map itself could be a bigger portion of the screen on mobile as default. 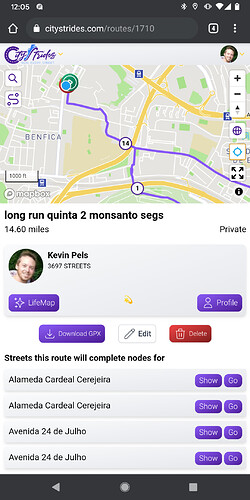 In the lower right corner of the map, there’s a button with arrows going in four directions. Tap that & the map goes full screen.

It’s been suggested before that a slider could be added to the edge of the map, allowing people to resize the map to their preferred size. I like that idea a lot, but I’m worried about how much time it would take for me to figure out. That worry pushed me to the full screen toggle button - it was super simple to add & it got the job done for lots of people.

I had anticipated that response re:full screen map after I posted but didn’t edit…The problem is combined with how I use routes (my intro to the post). I said before that sometimes the edge of my hand contacts the screen while running and the next time I look down, I’m on my profile page and have to hit back + livetracking + fullscreen, all while running (yeah I could stop, sometimes I do, but I don’t want to…)

A slides does sound tedious to code and yet another thing for me to screw up while holding, but again, I assert that most people looking at a CityStrides route on their mobile device are using it during an activity, hence the map is the most useful part, no?

Basically: on a computer, all the non-map info is/could be useful for planning purposes, and screen space isn’t at such a premium. But during an activity, all of the non-map info is not useful to me at all, and it hinders its utility.

I’ll need more input from others before I make any drastic changes to this page. I’m about to post to Twitter, asking people to chime in with their perspective here.

I need to understand if anyone uses the bottom section of this page on mobile. It’s possible that there are people only accessing CityStrides via mobile - so if I remove that bottom section, people won’t be able to access the ‘Download GPX’ button (or edit/delete the route).

Basically, I need to weigh:

I can’t make that decision without more feedback

Totally get it, I was hoping to elicit more feedback with this and my other post about Routes - it’s such a new feature and others may not be using it the same way as me, but I’m using it almost every day! Thanks for signal boosting.

Just to be clear, I don’t want the bottom part removed – my ideal is default a large map view and you can tap a button on the side to bring up the menus/streets inc. access to the ‘download gpx’ button. Basically the inverse of what it is now.

Here’s another possibility, possibly easier than the slider from a coding perspective: have all that stuff in a drag-up menu. See below (& compare with above) - maybe with the 3 horizontal lines visual cue. It would be great if this was the default view for the route and you could drag-up the lower part to see profile, streets, download gpx, etc. 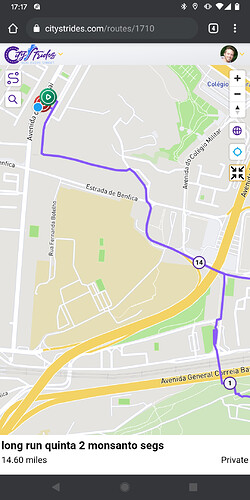 I use CityStrides on mobile and desktop. I use it while running, and sometimes I use it on mobile just to poke around and plan stuff. I think Kevin’s suggestion makes sense, where the full screen would be the default on mobile and then you have to click something to get the info/lists/options/etc.

I agree. Having the full screen map as the default view on mobile (with the bottom section visible when you click the four-arrow button) would be helpful when I’m consulting CS during a run.

My other pet peeve (let me know if this is the wrong place to post it…) is that I have to hit the ‘current location’ button (and ‘Allow’ access) every time I open a CS page with a map on it. If I refresh the page or minimise the browser then reload it I have to hit the location button again. I’m on an iPhone 12 using Safari.

Not saying this is a bad idea, but I don’t usually use Citystrides when out running, if I do I only use lifemap and the “where am i” feature.

I haven’t run with the routes view up. I use my Garmin 245 for routing and turn-by-turn directions.
When I’m out running and have the mobile map up, I only care about the map and nodes.
If I’m in the middle of the city, I use the LifeMap, but if I’m near the city boundaries I’ll use the City View under my Profile View. This map is small on my Galaxy S8. The fullscreen expand button doesn’t stick when I return to my browser after my screen turns off. I might try the route view next time, but I don’t usually design my routes in CS (is there an import from GPX feature?). My needs would be solved best by a fullscreen City-Specific LifeMap with only nodes from that city.

When I use the page on mobile, it is usually to review a map quickly before I go for a run while sitting in the car. I am not bothered too much to expand it with the arrows when I need to see it full-screen, but I am almost never going in and out of the map repeatedly like @kevincharlespels’s use case.

One thing that strikes me is the “wasted” space of the user profile block: 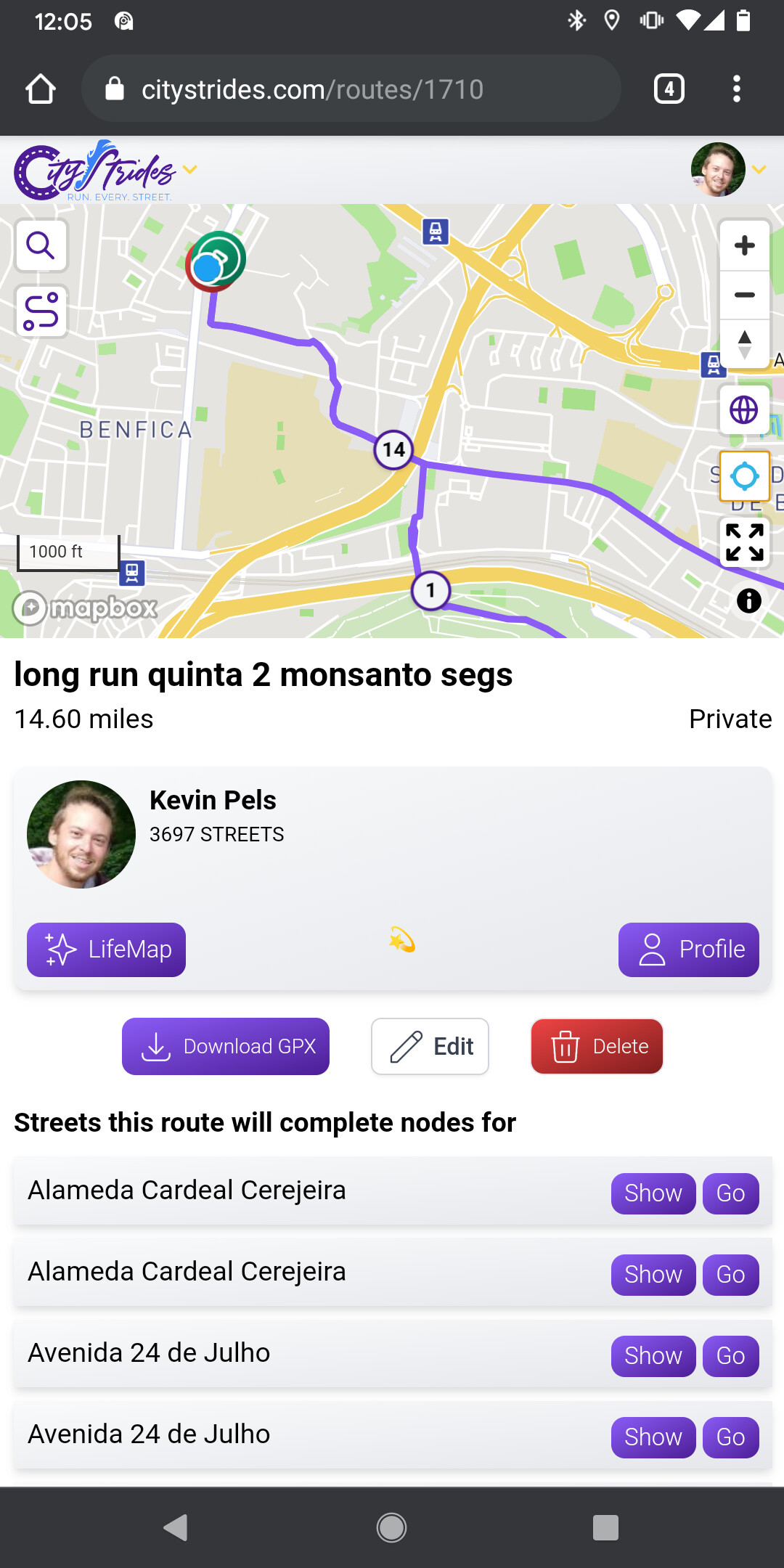 Especially on our own pages, it seems that center block with Kevin’s Smiling face and links back to full lifemap and profile could be moved, reduced or maybe it can “collapse” in some way to gain a percentage of the screen back?

@JamesChevalier any thoughts on circling back to this? I’ve been silently suffering for 7 months

see the 6th post in the thread would be my ideal, but even addressing @jpbari 's comment about the profile tile would free up some map real estate.