The real thing I’m missing from a home page is probably a “following” section, so I can follow my friends instead of bookmarking all their life maps. I know this one is already on your radar.

The default city progress isn’t that relevant for me as i have already completed it.
I’m actually on my third city right now.

Unless people change their default city to whatever they are running right now?

And the recently completed streets are not recent at all, some of them are pretty old?

The top border tiles are people who have donated to the site.

That’s a good point. Filtering out 100 % cities would make sense.

And we should get a star or something for being a supporter, that purple bar is very subtle!

The street search @city view dissapeared for me on Chrome… 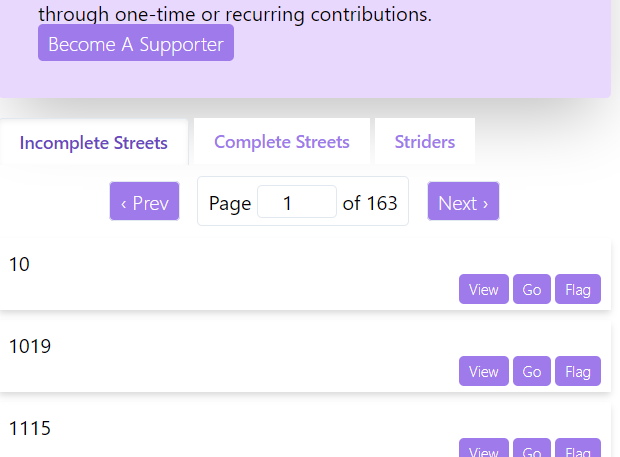 Other than that I love to see my top city on the homepage.

My idea with the recently completed streets listing is to answer the question of “Did I get it?” - hopefully to easily determine if the last activity completed a street or not … but I suppose, after thinking about it a bit more, a person knows if they ran down a street or not.

Those top borders are highlighting Supporters. I think I’ve mentioned how much of a designer I’m not

and it’s really telling here - I think I need some kind of ‘badge’ thing to overlay on top of the avatar photo, rather than some weird purple border.

Oh - lol - I just scrolled down to add some additional replies to this message & saw the full conversation about the border & a star. Glad we all agree!

Yeah, I really want a Friends/Following feature - I’m nervous about how much effort the privacy aspect of this feature will be. I need to spend some time to plan it out.

@hjkiddk Yeah, I’m expecting that people change their default city to whichever city they’re currently trying to complete.
I think I still have this bug where completed streets are associated with the first activity instead of the last.

@arbel2025 Yeah, I swapped out the whole system that displayed streets & I completely flaked on the search feature. That’ll come back soon!

I’m not sure what you mean by this - can you share a screenshot to highlight the missing data?

recently run street is strange, some are right but the first streets are from long ago

Yeah, I’m unsure how this is happening. I may need to update my data structure a little bit…

In the profile page I see a lot of redundant data

It’s just the activity “card” content that’s redundant, right? Avatar, name, completed, progressed. I can clean that up a bit…

there are two numbers of streets:

and also ‘wrong’ in the striders ranking view 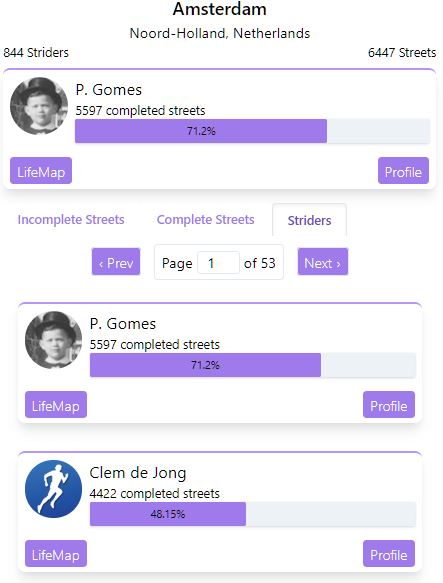 Ah, yeah, 5597 should be the total number of streets you have completed on Earth (I haven’t expanded yet).

That’s a really impressive map, by the way!

a pity that the moonmap is not yet incorporated, within a few years there will be tourist there I heard since the Mount Everest is full

the home marker disappears behind the lines, it was on top first

in the city view there is a icon in the ‘midst’ of a city looking like a temple (colums and triangle roof or timpanon). If I click on it I see the properties of the object City (name, number of streets and contestants). But in my case it is buried under the lines while it was on top in the earlier version

I see now that the top 3 most recently completed streets are staying the same streets, some from long ago in the my profile look. The other streets are ok

A post was merged into an existing topic: Working On It: All city/street progress missing

the uppermost 3 recently run streets on the home page are still wrong, old streets i have run long ago

I was writing a separate post and came across this one from forum suggestion. Here was my feedback.

This is just basic feedback from a site usability perspective. I think that the home screen (for me) is not very useful. Most of the real estate is to show just 4 top leaders which isn’t useful to most people (other than the 4-8 people usually listed). The recently completed streets is also not something I personally ever care about and it also uses up a fair amount of real estate. This page doesnt really have any of the info I’m looking for when I login. When I first started using the site it was really confusing to figure out the navigation and that I had to go to the upper right to find my profile and lifemap which is where I think people spend most of their time (to go to either see their completed activities and city percentages). The profile page feels like more of a hub or “home” and conveniently links to your lifemap. Anyways I figured I would throw this out there I know you have a ton on your plate. I can navigate around fine now but it was just something that was less intuitive when I was first using the site and may affect other new users. Ideally it would take something similar to the profile page and work some other data into like listing challenges or showing your street rank that links to a more robust leaderboard system.

The most helpful thing for me is to know what you (or anyone reading this that’s about to post a reply) regularly do & expect to see within CityStrides. So far I’m hearing: