Now that you’re updating city data to bring in the changes made to OSM, it would be useful if the city page displayed a “City Data last updated on October 1, 2020” or whatever date the update process was last run. When you make a new city, use the creation date.

This might help with some of the posts, too.

Release notes tracking page
Street on map but not in street list
Remove Streets that don't exist in my town
fredrik.coulter (Fredrik Coulter) October 1, 2020, 11:11am #2

Since you’re only updating active cities, adding a note the the city is inactive (and potentially a button to add it once to the active queue for the next round of updates) might also be useful.

If this is implemented, you can also use the data to automatically turn a city inactive, thus lowering the number of cities you need to update. If a city is active yet no one had run in the city since the last update, you run one last update then switch it to inactive. It will stay there until someone clicks the “make this city active” button.

This will help in cities like my home town, where I am the only person currently running it. When I retire, I’m planning on selling my house and moving. This would update the city one last time after I leave, and then leave the city untouched until the next runner shows up and requests an update.

Would also be cool, if possible, to see an estimate as to when the city will be processed again*, or if it is “paused” because no striders and needs to be “activated.”

I’m usually OK waiting for this to process naturally, if I know how long the wait is. Nothing worse than impatience when it comes to queued jobs.

'* Unless OSM has a hook, or other method, to notify interested parties, or daemons (UNIX / LINUX), of an update to that city.

You make an interesting point about finishing a city. Will Striders get credit for finishing a city on a certain date, like streets, knowing full well the next update may mean one no longer has 100% in a city? Maybe there could be a way to save that with/on the city’s page?

Where is that?
cities page? profile? …?

Strange that I don’t see that on the cities I am running/ have finished. Could be a time thing so I wait for another 24 hours 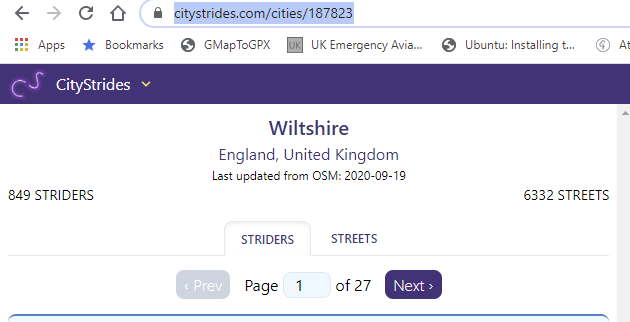