Large printed poster of your running

I’ve got this idea of making posters available for purchase, and I’m wondering what you all think about it… 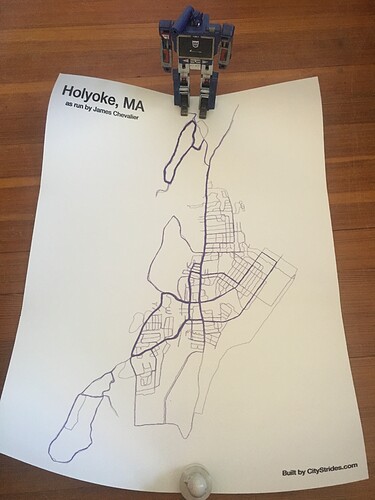 Here’s a super-zoomed-in view, which highlights some trouble I’m having with image clarity: 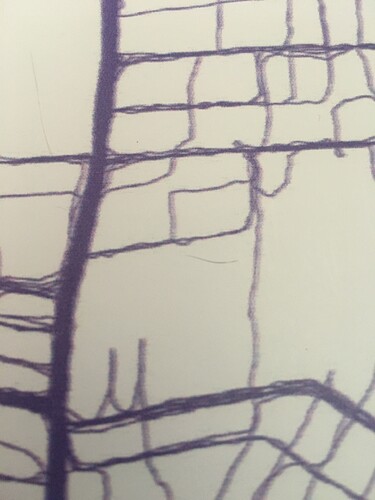 So, it looks great from a foot or two away but it’s not a crisp image & that’s obvious when you inspect it closely. I can spend some time looking into alternative approaches, if people are interested in purchasing these.

I need to know:

Love the idea, and the size looks good. It’d be great to get a smoothed version. Ideally a single line along each completed street, but no idea how that would be possible! No timeline isn’t a big deal to be, I’d want to see it as compete as possible.

I think it’s an awesome idea. I think that super crisp (vector) lines would be critical though, although I’d probably get one without it. I’d definitely pay for a full black & white crisp heavy card stock prints though. My friend was actually thinking of doing this for me. But yeah. Would be super cool.

Oh yea, this is great. Not seeing the city roads, or other identifier info on there was a little weird, but in fact, not having the street names, or background map imposed on there is a fantastic idea. Very artsy indeed.

So to answer some of those questions…

Here is how a configuration menu could go…
A) Line color (red, green, black, yellow, blue, etc.)
B) Ability to choose the specific map area you want (city block to entire country)
C) Option to include background map (and streets not run) vs. blank background (as per sample)
D) Option to include custom text (date, date range, runner name, event name, etc.)

Those are just a few that come to mind…

You should add an option “hide from LifeMap” in “Edit Activity” so the users can clean up their LifeMap. Deleted acitivies with bad GPS-data eventually find their way back into Citystrides unless deleted in Strava/Runkeeper.

Good idea!
I’ve taken the approach of fixing the activity in the tracking service, then deleting it in CityStrides, which allows it to resync with the corrected data.

Maybe you could just use the street data as the basis instead of the raw GPS tracks, that would result in smoother lines.

Go figure, that’s even worse in some cases. Sometimes, the nodes for the street aren’t in order. So the resulting line, when drawing a line from point to point, can be insanely scattered.

Related to some of the earlier comments… I did figure out a way to export SVG data of a tracked run out of the database. So I should be able to produce ultra crisp maps at any size. I still have some work to do to figure how to accomplish this in bulk (lifetime vs single activity), but I’m headed in the right direction.

Yest it would be fine if there is a printing facility in Citystrides
It would be great if you could scale the part you like to print.

but if I, lets say I finished my city, I would like a big beautifull sharp poster of it on a3 or maybe a2 format and would gladly pay for that. It should have some names on it to orient where i have been.

I also use it to track trails that I have run, so would prefer multiple lines. It also acts as a heat map with runs layered.