Is something going on with Garmin GPS drift?

I’ve been noticing on Strava a lot of friends & folks I follow with goofy maps where their trace is drifted from their actual route, ie, the ‘shape’ is correct but it is displaced from the actual route. I haven’t checked exhaustively but most people use Garmin. I hadn’t had the problem myself until today, when after the first 2 miles of my 9 mile run my tracker on my watch drifted off and never returned while I continued to run the last 7 miles of my proper route with my phone’s map. The final result was not good (left CS route, right Garmin trace):

Are any CityStriders with Garmins (or other trackers) also noticing or dealing with this, and if so, have you tried looking into it?

I had something similar happen earlier in the week. The track for first 3-4 km was offset to the east by a few hundred meters, the general shape was fine. It somehow picked up the correct location after a while, the rest of the run was traced correctly. I hadn’t synched my Garmin ahead of the run so I put it down to outdated agps files or something

.
There was a similar incident on new year’s day a few years back, the proposed solution back then was to GPS-soak the device for 5-10 min. I did that and it’s been working well since.

There has been some discussion on this here. 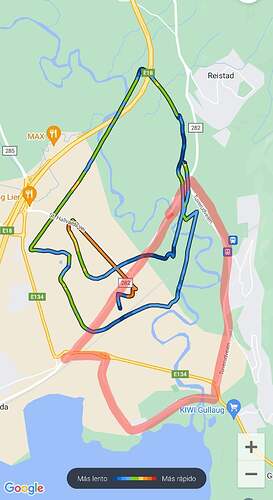 Thanks - for those who don’t want to read the reddit thread, apparently it’s persistent enhanced geomagnetic storm activity which is causing certain Garmin multiband chipsets to have issues, and the least affected configuration is dual band GPS+GLONASS. All this according to reddit users, but makes sense to me.

We had the same issue with our Sony GPS chipset based watches and I had a discussion with Sony’s engineers after we received many customer complaints about the drift. The issue was actually with the generation of their server generated ephemeris data (aka AGPS data). We have seen this issue a couple of times in the past, but for those it was far more localized. For this one we had complaints from customers all over the globe. Sony assured us that they fixed the issue and that they added a verification tool to the SGE to prevent this from happening again. The key at this point is to make sure that your watch has updated AGPS data, as using the bad file will continue to produce the same results. Most devices load data good for 7 days, but will update it sooner than that as long as you sync it with its app. In our case (Timex) we load new data every 3 days, but load the latest 7 day file when we do so.