I saw a similar post back in July 2017, but I couldn’t figure out if the question had been answered.

I’m definitely not getting a 25 m radius along my GPS route, as it frequently shows that I’ve missed roads that I’ve clearly run - the GPS looks like it’s maybe a few feet off the road, but certainly not 25 m. 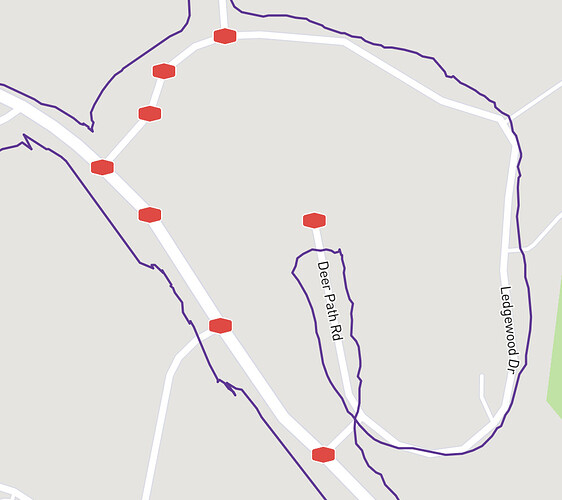 Are there any ways to fix this other than buy a more accurate GPS than my Apple Watch/iPhone? Thank you!

I’m not an Apple person, but I wonder if there is an accuracy setting?

Or maybe the OSM data is off?

I am having the problem pretty consistently across multiple areas of at least three towns, so I’m guessing it’s more me than OSM. I’m surprised an Apple Watch doesn’t have good enough GPS to get at least close enough to the nodes. So I figured I’d check just to see if anyone else had encountered this or had an idea. But anything is possible! I appreciate your thoughts!

You could get an account on runkeeper. There you can so upload gpx tracks. And in runkepr you have te possibility to adjust the track to the real time situation. After downloading the corrected track. You have a correct pgs to send to citystrides via the connected way

I tried Runkeepr. It is incredibly slow and tedious to move each tiny dot, but I’ll keep trying to see if I can get a single run done and re-sent to Citystrides to see if it’ll catch a few of the wrongly-missed nodes. But my original question, I think, still stands. @JamesChevalier, is there some reason that my routes aren’t processed with the 25 m radius that is supposed to be written in to the code? Thanks!

This was kind of interesting… Sounds like Apple is off. https://www.reddit.com/r/AppleWatch/comments/amq6nw/gps_accuracy_vs_garmin/

At that link is a link to: Calibrating your Apple Watch for improved Workout and Activity accuracy

I had a similar issue today with my Garmin. It was a foggy morning, so might have been a little off, although the other streets were a lot closer to map than this one with the missed nodes. 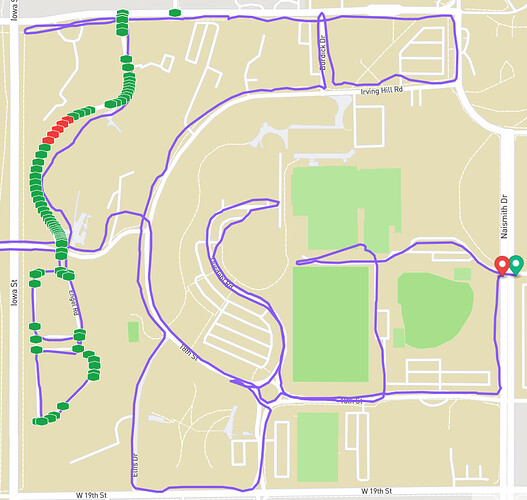 I have the same problem, and I’m still not clear how to fix it. This is with Runkeeper. The problem (I think), is that this road doesn’t have a 90 degree corner at this node. It’s more of a loop, like it is on the left side (at km 3). I fixed it in Runkeeper yesterday, will that eventually update here as well? 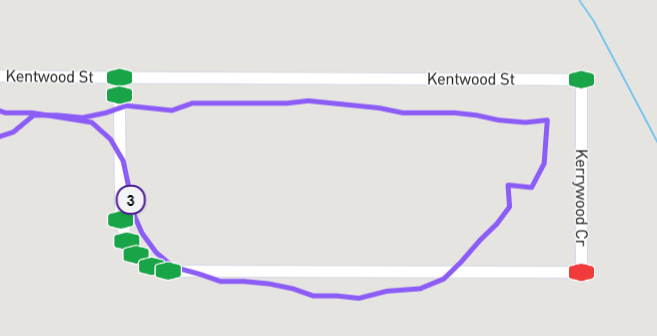 @lydiabaggins What I do in this situation, is take a look at what the OSM map looks like.

If it is accurate, then it might be a GPS issue on your device. Since you mentioned Runkeeper, I think that means phone, and I have found phone GPS to be a little funky sometimes.

If the map is not accurate in OSM, OSM can be edited so that the road is shown correctly. In this case, a city update (here on CS), will pick up the change and reprocess your data.

For info on editing OSM, you can see this: OSM Basics

Thanks @ericjrw. I’m not the most tech savvy person, but I’m willing to give it a try. I mean, what’s the worst that can happen? It’s not like I can crash the site by trying, right? RIGHT???

I looked it up in OSM and the street is very accurately mapped. So yoyr gps registration during the run had some drift. In runkeeper you could correct that with the edit function. Re-syncing the run will give you green nodes in CS on that street

I have had the same problem as @lydiabaggins and @a346360f7669a097bb58 isolated to certain cities, and worse in certain parts of those cities than others. Just seems that there is a lot of interference with the GPS signal, some of which is obvious (when running in a tunnel, etc.) and some of which is not. My solution for editing my GPX to be more accurate was recommended by another CS user - RouteConverter - OpenSource Edition is pretty easy to figure out how to use, much less slow/tedious than runkeeper’s web-based version, and has the same OSM backend as CityStrides.

If you decide to go this route (no pun intended) I recommend reducing the number of recordings your watch does. I had every second recording on thinking it would help my accuracy (which it didn’t, really) but that just meant more nodes to drag back to the actual route I ran when my Garmin thought I was running through a building or through a wall into a military installation…

I’ve been going back and meticulously revising my LifeMap in Lisbon via this method, here’s my progress so far: 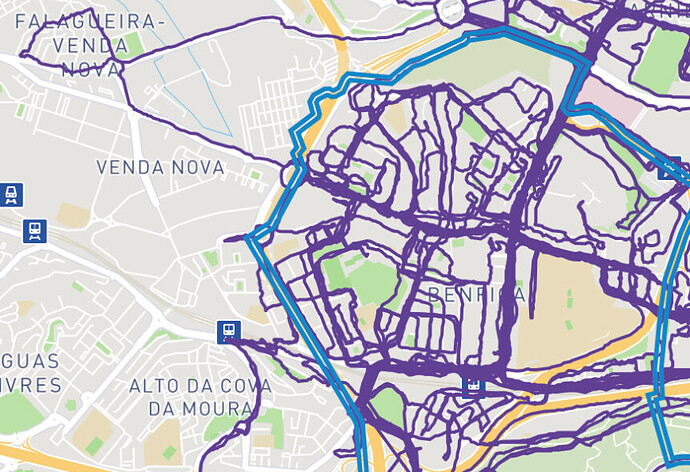 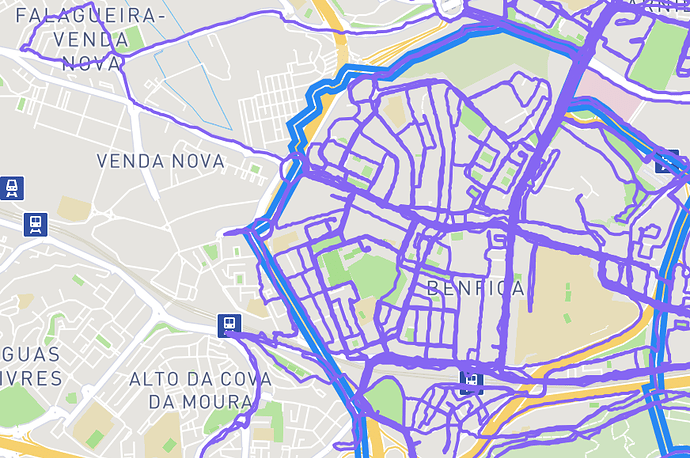 My solution for editing my GPX to be more accurate was recommended by another CS user - RouteConverter - OpenSource Edition is pretty easy to figure out how to use, much less slow/tedious than runkeeper’s web-based version, and has the same OSM backend as CityStrides.

You got that one from me

Right - after I dug up that old screenshot (you can tell because it’s before James lightened the purple of the traces!), I forgot to find the post recommending route converter. Credit where it’s due, thanks again!

Hi Lydia
If you let me know where this is, I can have a look in OSM (Online Street Map - which provides the base map for CS) and I’ll correct the corner for you - which also corrects it for any other user.

I love this little person on the corner of the street too, making sure no-one cuts the corner! 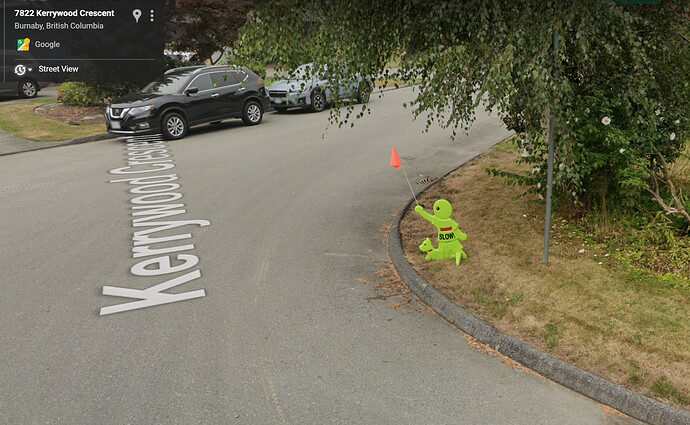 Thanks so much everyone. I took a look at OSM too and as mentioned it definitely looks accurate. I have a bunch more streets to run in that area so I’ll likely just run that loop again and try to take that particular corner as wide as possible. I may even make airplane arms when I do it to make me go faster.