I’m interested in having CityStrides in a Garmin watch. I’m not really a developer but I can code in several languages, and I don’t know if anyone has worked on this or is interested.
Does CS allow API access to users’ points data? Can I make a Connect IQ app and use it without listing it in the Garmin app store? I know I would need phone access for the data via Bluetooth. What else do I need to think about, any deal breakers?
@JamesChevalier would you be interested in this for supporters perhaps?

Interesting idea. When I go out on “node runs”, I don’t typically bring my phone (though I know I should).

What would the app do? I think there are apps that allow for a route to be uploaded, for turn-by-turn nav, though I have not messed with any. I find a printed map easier to deal with.

But if there was a way to upload node coords, that could be useful. I have this one missed node that is bugging me… 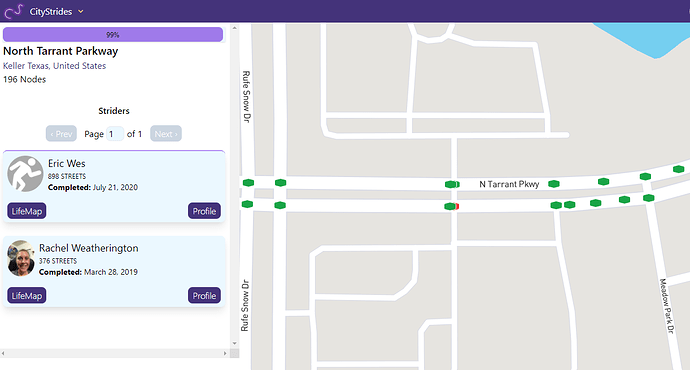 And maybe I would not have missed it with the right app?

I think the minimum product would be just a live view of the missed nodes around you, on a street map. Nice features to add would be showing the GPS path from the current run and perhaps route planning.

Rather than a full fledged IQ app, perhaps it’s possible to create a POI file that contains only the red nodes within a certain area that could be imported into a Forerunner 945 (or other Garmin mapping device)?

@fredrik.coulter Interesting idea. My FR235 is not very strong in the mapping dept, but perhaps it could point me towards the red nodes if I could get that list of coords from CS onto the Garmin? Maybe like a radar screen (with zoom)?

that. Now I map my route in garmin connect and upload it to my watch. Which is nice for longer roads and such but often not good enough to hit nodes in alleys and such so for those I take out my phone to check directly in CS

@david.bradway, wonder if it could tie in with this idea: Display 25m circle around position/nodes

PS. On your Lifemap, there is the “find my location button” (button under node finder), though don’t recall if it is a supporter only feature.