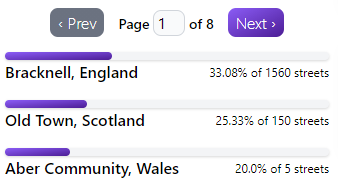 Thinking about it a bit more, and pairing it with Adding date complete to city and Badges for milestones and the fact that a city update can change the city in a way that changes your percentage from 100% to something lower …

It’s been a while since the badge/achievement idea went up, but I am still actively thinking about it & I expect one of the first badges I release will be a “Completed [city name]” badge. This way you can earn it, the city can change which decreases your percentage, but you retain the fact that you did at one time complete it.

This could also help fix up a bug where you complete a city … have it connected to Twitter so you tweet about it … the city gets updated in a way that adds nodes … your account is reprocessed and those nodes are already completed by past acitivties … which marks the city as complete again … and sends off the tweet again.

Long-term/future additions could include a first/second/third place that can shuffle around if someone else provably finished it before the current first-place-holder.

Tht approach is what I am preaching for years now. When one has 100,0%, it is an official completion ‘at that point in time and history’. It could/should be rewarded.

I so hope this Badges will be processed with data from the past. Wouldn’t want to miss all my ‘1st to reach 100%’ on a lot of cities here!

One downside I see is when cities or towns are imported in an incomplete fashion in the first place. Probably a lesser concern for larger cities, but it really depends on the variability of how well or poorly it’s been curated by the OSM community. In the case of the more rural part of Portugal I spend a lot of time in, there were only 2-3 roads per village before I started updating them myself…but even in the metro area of the capital Lisbon, there were big sections missing road names! I still do a lot of updating every week/month as I expand my range on exploratory long runs.

tl;dr some OSM updates are not for new construction/development, but due to incomplete curation in the first place.

Apologies if this is a repeat. How about a badge on a users profile if they are the very first to complete a city. More than one person can get a 100%, but for the first to complete, there can be only one.

I think that the First, second, third, etc. city completion badge topic is what you are looking for

Actually. When you are in your profile and you view a city and then view other striders who have hit the city, maybe pin the first finisher to the top with an identifier badge there. 1st 2nd 3rd. A hall of fame.

Fellow strider, @dallas.devries had this idea:

% manual streets of a fellow strider

Would be cool if you could even be recognized on the city page as the first to do so with a date.