I was reading another thread about GPS accuracy. I figured I would share some info I have found about the Fenix/Epix lines.

Wear them on your RIGHT hand if you have them. Otherwise you will get a GPS track that is shifted to the left of where you have run. Something about the positioning of the antenna in these watches causes this issue. I have seen it in my Fenix 5, Fenix 6Pro and Epix 2 watch. I have also verified it with many other users of these watches that they see the same thing.

Its most obvious when you run an out and back as you see the tracks spread wide apart when wearing them on your left hand. Run the same route with the watch on one hand, then do it again with the other and checkout the tracks. I think generally the pacing/distance is not affected but the GPS tracks are which is very relevant for run mapping. I have had to rerun a bunch of roads because of this issue.

The Fenix/Epix maps and route/course functionality was a huge game changer for me in terms of run mapping as I could at a glance see where I have been and where I needed to go and turn right on the screen. Hoping direct saving of the routes from CityStrides to Garmin(or Strava) to be able send to the watch easier becomes a thing.

Ugh…I don’t think I can switch which wrist I wear my watch. Maybe will try a single run but that’s a bummer that wearing it on left wrist could cause such a negative change.

I need to test if this makes a difference for the fr245 as well. The tracks for out and backs rarely match exactly for me.
There are some other/additional factors that might be in play as well, like running on the left-hand side of the street (watch on the left hand) in built-up areas resulting in worse tracking. I’ve never bothered to investigate this properly, so it’s just a gut feeling…

Yeah…it takes an adjustment for sure. I’ve been doing it for a couple of years now and it still feels weird.

I’m left handed so always wear my 7x on my right wrist so I’m lucky I guess. I do find the route function very handy when running the suburbs with loads of small roads clustered together.

I am not sure if I am alone, but I have come to the conclusion that the Fenix 6 series is just not that good at GPS tracks and distances. I fought with garmin for years because it would short (always short, never long) my runs anywhere from 5% (good day, clear view of sky) to 25% and the trace would never be sharp or accurate compared to my previous watches.

They always acted shocked when I brought my concerns to them, so I suspect it is a problem with the watch that most owners just put up with.

I came across a reddit thread a while back that mentioned these issues being specifically related to the Sony chipset used in the 6. Apparently the multiband and new gen chipset used for the 7 is a big improvement. I use a 5x with no major issues and haven’t noticed the left vs right issue in a major way, but certainly can’t discount it either.

I have the 6Pro and the Epix 2. I can say the the GPS is much improved in the new version. Too bad they didn’t fix the other issue though with what hand to wear it on…

In my n=1, n=1 experiment of running one time with my Fenix 6X Solar on my right wrist, I did not notice a difference in GPX trace quality (still mediocre), and I was flummoxed a few times when I went to pause my run at an intersection and tapped my naked left wrist. Caveat is that I live in a city where GPS connection is always mediocre to bad, so, it is what it is I suppose.

I’m happy you are not experiencing this!

Here is the 17 pages worth of comments from the thread I started on Garmin a few years ago on the Fenix 6. Could be that the solar is different as well.

The right wrist bias is definitely a thing for the Fenix 6 and to some extent for the 945. When we are testing watches for accuracy we do tests on the same courses with the watches on one wrist versus the other and many watches have a bias. It has to do with the antenna tuning and we who develop watches will typically bias the antenna for left wrist performance over right, since the majority of consumers with wear it on the left. Besides Garmin, most of the Coros watches and Amazfit have a bias (left though as opposed to Garmin’s right bias).

Some watches though experience almost no bias. The Apple watch Series 6-8 and Ultra are great examples of this. The new Garmins which have abandoned the Sony chipset and gone back to Airoha (MTK bought Airoha and moved their GPS chipset from the MTK brand to Airoha in 2019) also are showing negligible wrist bias.

No I meant I didn’t notice an improvement in performance - it was just as meh as it normally is.

So interesting this topic. I don’t have any issue with my fenix 6x gps quality. There is only some quircks in registration when the buildings around are closeby and high. but that’s is expected. And i guess left-right wrist is bias? Is there any source that has this phenomenon is objectively measured?

For me the objective data is simply comparing the GPS tracks between the two arms. Its clear as day for me and several others I know. Though it certainly possible the degree on which it shifts can vary between people.

I have not run into any sites that publish this data, but we have a ton of test data on many different watches. We developed a tool that does point by point accuracy analysis and plots the data with Green being within 5m of actual, Blue within 10m of actual, Yellow within 15m of actual, and Red being greater than 15m from actual. We also assess the percentage of points within 5m, 10m and 15m of actual. (Note that the black lines under the colored plots show the precise course plot. We map our test courses with sub meter accuracy)

Here are examples of the Garmin 945 (which also exhibits the right wrist bias):
Left Wrist: 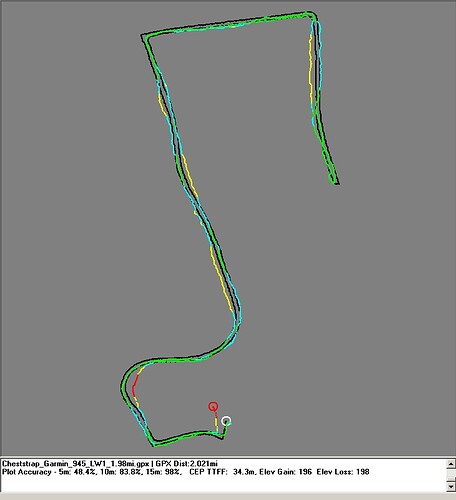 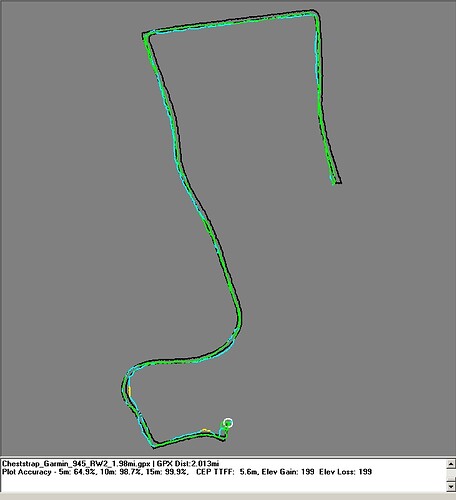