In a nearby town, we have about a dozen streets that are listed as public in OSM (and therefore CityStrides). However, they are in a cemetery and really don’t have street names posted anywhere. I have been hesitant on “checking them off” as I’m not sure how people grieving would feel with me chugging along those streets.

To be fair, I do have close loved ones that are buried there so I’m not concerned about trespassing. Just trying to be respectful of others and gain consensus as to whether I should mark the streets as private.

I run a neighborhood cemetery fairly regularly. I’ll always give folks spending time in remembrance plenty of room, and respect the property rules as well (visitors welcome, dogs not, daylight hours only).

I’m rarely the only one there, and see a couple of regular walkers on the weekends. A few other big cemeteries nearby are similar, and have the same semi-official names you mention too. I’ve been forewarned once by employees that a service was expected, thanked them and turned back, but otherwise have never had an issue. This may give you an idea of how often I’m there: 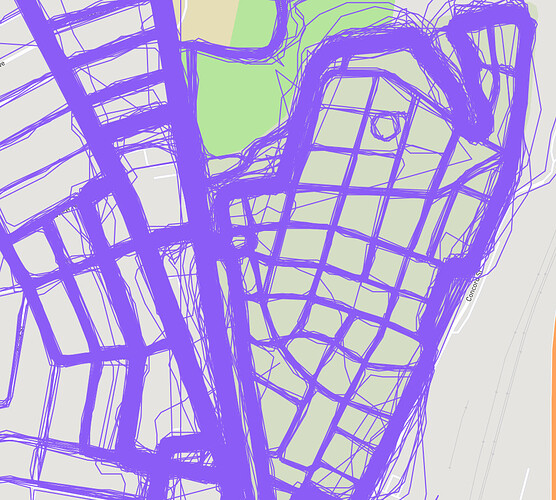 Personally, I like to think it’s nice that someone visits and remembers all the old names that have come and gone. Especially in a city like mine, where so many of the big family plots match up with historic street names.

If in doubt, i would just walk it. Have a few places where i walked.
But then again, in Denmark we hang out in cemeteries, just for fun

I did my local cemeteries in early morning, almost empty then. But if there are more people around I’d just slow down and walk for a while. Marking as private would definitely be wrong, OSM is not just for Citystrides, private could by others be seen as meaning you’re not allowed to walk there

The topic of whether it is disrespectful to run in a cemetery comes up regularly on the running subreddits, and is always a divisive subject.

My usual contribution to those threads is to suggest that people go to the cemetery’s web site and look for their “rules and regulations”, or call the cemetery office and ask. (Cemeteries are typically just small businesses.)

I think the best question to ask if you strongly want to run there is, “Does the cemetery have a policy against running/jogging on the grounds?” I think that is more likely to get the response you want than “Is it OK to run here?”

One of the largest cemeteries in my area has an explicit policy against it. (I did illicitly jog there early one morning. See a brief anecdote about that in this post.)

Streets in the Mount Auburn Cemetery are part of Cambridge, MA. To finish that city I walked them because it explicitly says no jogging on their site. Follow the posted rules, but as long as it’s public you should be free to walk at a minimum- and if it’s private, it shouldn’t be included in CS so should be changed in OSM.

I ran Winterman in Ottawa last year and they had to move the race location at the last minute due to (unrelated) protests. The new location ended up being in a large cemetery. It was a really cool experience and didn’t feel disrespectful.

As others have said, as long as you’re being respectful of visitors and following any local rules then I don’t see the issue. I think it’s great to bring more life and energy into these semi-public spaces.

I have run every cemetery I have come across so far…which is to say very many and never had a problem…if they don’t want runners there they can put up signs.