When selecting a town in your profile, that town, along with it’s blue border, are displayed on your screen. Does anyone think displaying multiple borders would be useful?

i.e. I would love to see a feature where, once you feel your town is completed, check a box and that town border is highlighted on your LifeMap. You can then see, at a glance, all the towns you have completed.

Today I have to do this manually. I have attached an example. 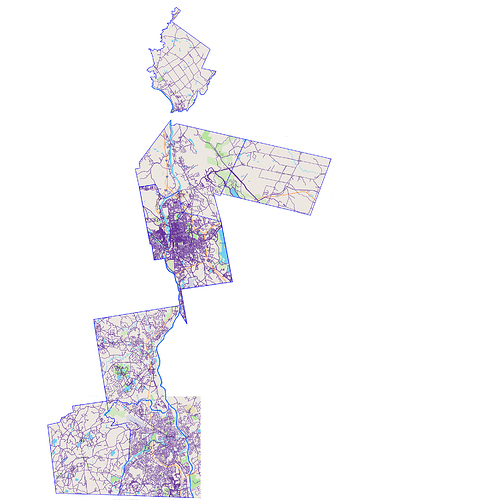 Looks cool! i wish i actually could see a city border for my cities. In my regions it seems there are no sicy borders imported at all. It would help me a lot, for planning purposes, now i need to switch all the time between citystrides (street done/not done) / openstreetmap (look up cityborder) and strava (planning my next run).

I didn’t realize that. What do you see when you click on a city under your profile? Does it just zoom in to the general area?

Exactly, the area where the city is, is in view. But no blue line. When the cities were imported by James, apparently the relation in osm for these borders were not accurate or tagged correctly. They are in osm for sure. But I guess James has more important stuff to do then (re-) import cityborders for existing cities in citystrides.

That definitely makes it more difficult to determine whether you have completed a town/city if you have to rely on the list of streets only.

Like I tried to explain: I use the combination of OpenStreetMap with the city border visible on one screen and the node hunter on the lifemap of citystrides in another and drawing my next run in strava routes in a third. And then alt-tabbing from and back all the time. It works somehow but is not ideal. Cityborders with unrun nodes in one and the same screen would be very helpful indeed 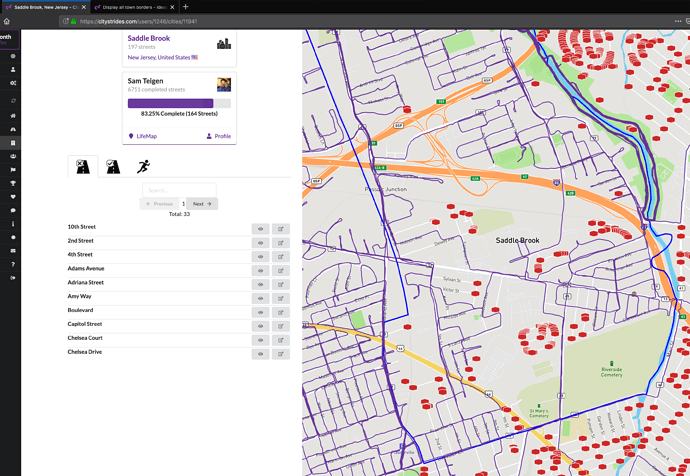 I’d quite like the option of borders below the town level too. I’ve been trying to run all the streets in a few of the wards of my city, but it’s difficult to know other than using local knowledge which streets I need.

@stewartharding1 this would require an entire other level to be brought in that isn’t presently. The system works on Country → Region → City → Streets. Adding the subset of wards/neighbourhoods would be a significant (but cool!) add that isn’t planned afaik.

That’s exactly what has now happened! In my city, James had kindly added each city ward as well as keeping the city itself. It seems every country classifies their regions, cities and lower divisions a bit differently, and in my city it worked out to be able to show exactly what I wanted

Thought I would touch base on this topic again since it’s been a few years and there are many more striders today: Is there anyone out there that thinks it would be nice to be able to click a button on your LifeMap and have it display borders for all cities that are 100% complete?