Firstly, @JamesChevalier you are a hero, discovering this site a week ago has brought me so much running mapping statting nerd joy. Thank you so much for making it for us all and maintaining it.

I have just encountered a slight issue, it may be something known but I’ve done some searches for things like ‘new nodes appearing’ and while there are similar behaviours documented I’ve not found anything that explains exactly my issue. But it may also be I’m a noob and have set something or imported something in the wrong way. Apols if so.

Basically I’ve noticed there are (many) red nodes on streets near where I live that I’ve run many many times. There is also a discrepancy between the number of completed streets shown in my local city (Wandsworth in London) on my profile page (675) and then the map page for Wandsworth when I go into it (544). I’m guessing the missing 131 streets might be the ones I’ve run but now have red nodes? Eg. Sabine Road (below) I’ve obvs run the length of several times but has red nodes on it, and is in the list of Incomplete Streets and not in the list of 544 Complete Streets on the left of the page.

Any help much appreciated, but also mainly THIS SITE IS AMAZING. 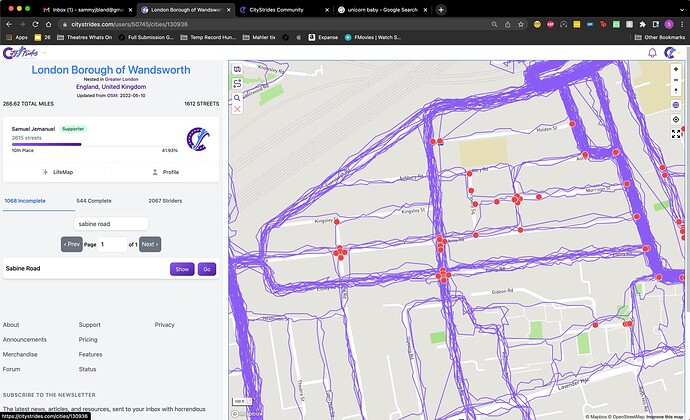 Can only embed one screenshot but you can see the 675 number on my profile here:

I notice the city was updated today (the “Updated from OSM: 2022-05-10” text near the top of the left column). I’ve got two queues that do work around city updates & they have ~an hour backlog. Maybe the city was updated in a way that created/changed/moved/whatever those nodes, and they just haven’t been processed yet.

Let me know how things look in

maybe give it 2 hours just in case?

OK will do James thanks. Hadn’t noticed that ‘Updated’ text there and it being today, that prob does explain it. Will let you know if it doesn’t resolve itself overnight!