City nesting/hierarchy in the profile view

Not sure if this is the best place to post this, but it would be really cool to have some sort of nesting/hierarchy in the profile view as well. Without one the list gets crowded, and the various nested entities are not grouped. This could, for example, take the shape of an expansion button next to the parent city, which then displays the parent and the nested cities indented underneath. Having a visual distinction would also be helpful (parent in cs purple, nested in a lighter shade maybe?). This visual distinction could be carried through to the activity screen to make it immediately clear which completed/progressed street comes from where.

Been thinking about this as well and I’m sure it’s been mentioned before.

It would be great to be able to customize the whole list, and hide regions you don’t care about or promote ones you’re especially focused on. For instance, I have rural mountain areas that I’ve run 1/3 roads (33.3%) higher up on my list than municipal areas I’m interested in focusing on and have to click thru my list to find.

In the distant future (~5 years) I’ll be retiring. What I’d like to do when I retire is travel the world. Selling my house, etc., might happen, too.

Right now my number three city is Shipshewana, Indiana. I was there because my daughter had an eight month gig at a local theater. It’s a tiny town, so I’ve actually completed around 4% of the town. But I doubt I’ll ever return. At some point, it might be nice to move that city to the bottom of the list.

HOWEVER, this is not a high (or even medium) priority.

I had suggested in an earlier post to possibly “pin” top 5 cities to the front of the list so that one could change which cities they were currently running in. Either way, all for this idea.

I love the new pin cities function, looks really clean and is a great way to keep cities organised!

The cherry on top for me would be to have the display of nested cities tidied up as well, so here’s a mock-up of what it could look like in the hope of getting a few more votes for this 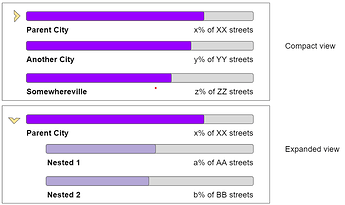 ^^This is a cool and practical idea, seconded!

I’ll have to slightly adjust the data structure to do this. I don’t think it would be too difficult.

), because the left area is already used by the pin/unpin buttons. Maybe I can put the toggle icon to the left of the city name, within the width of the progress chart.

100% in favor of this idea. Thanks James for all that you and for looking into this!