Yeah, if there were some sort of post-processing between OSM and the gpx data grabbed by CS. Likely it would make life even more miserable for people running in cities with poor GPS signal reception though…not sure there’s a perfect solution to this. But again, until there is some actual incentive for finishing a city first or being highly ranked on the global leaderboard, and it’s not clear that there ever should or will be, the thrill is merely in the chase!

The StreetFerret algorithm is now based on segments rather than nodes. Thus, for a straight road between intersections (such as in a gridded city), it is no longer sufficient to run just the endpoints. The algorithm is now virtually adding a mid-point node to all such instances. Thus you may notice a small number of segments turn from green to red if you haven’t actually run the segment. I made this change in order to meet StreetFerret’s goal of giving you the most accurate statistics.

Thanks for sharing the StreetFerret. I like the green and red if you can down a street. I just found a small section I missed in a city.

I know there is a road I recently finished but knew I didnt because I had run both ends. it was a .25 section so it shouldn’t be skipped. I went in and put in a driveway on that and fixed the road so it also had a point in-between so someone else cant miss it. When you look at a road all the points in OSM become nodes.

I personally like the nodes more then just the lines. Its easier to plan out and draw the lines. But no matter what I run the whole street.

Interesting, I had missed that! But it’s not “foolproof” in Streetferret either, Take a look at this part of Stockholm (Kungsholmen), this is from CityStrides. Nine streets going south from Pontonjärgatan that I have not run, They all look OK in CS. 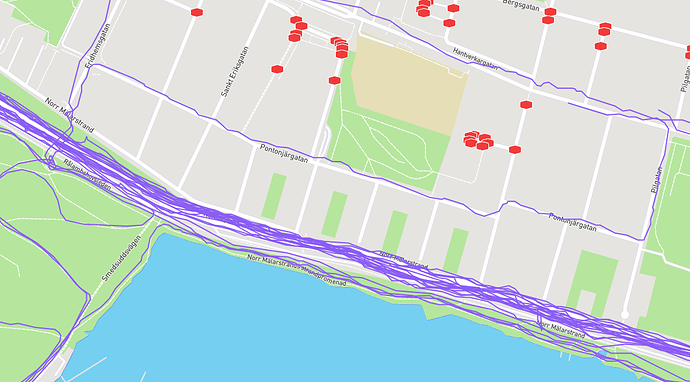 And when I compare to StreetFerret, six of them look OK, and only three are shown as not completed 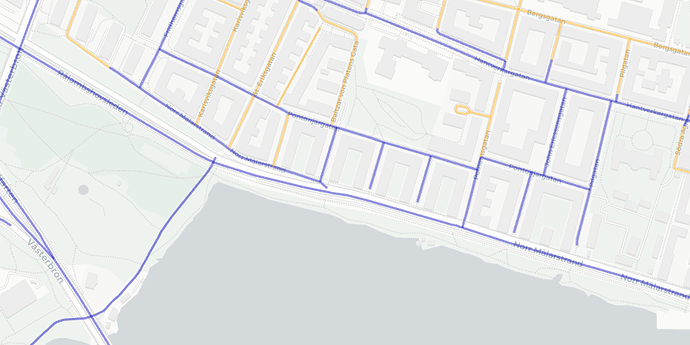 Yeah I see some weird things. It doesnt like boarders and several roads are not there. But that helped me find a few roads I ran but didnt realize have names. So I got to do several updates. Its very easy to spot roads that need to be ran.

A post was split to a new topic: Streets not marked as complete

I just had a thought on this subject.

Now that the total distance for each city is part of the city entry, might there be some “completion metric” that compares “stride miles” to “city miles”? In @8f7162110d9eeaf907ab’s example (link), I suspect the Stride miles is going to be (much) less than actual city miles.

Perhaps in this case, a

could appear next to the person, indicating something is fishy.

In most cases, if not all, Stride miles should always be more than city miles. In fact, I think at one time I posed (or maybe just thought) there should be a “city efficiency” metric. A number less than 1 would be the “something is

y” metric, and the person with the smallest number greater one… Well you probably get the idea, but also will figure out this idea is not necessarily going to be accurate, as extra legitimate miles, can mask

y miles. Note: a metric > 1, but very close to one, seems very unlikely.

I (kinda) say this in jest, because, while I really enjoy being the first person to complete several (admittedly smaller) cities in my area, my real satisfaction comes from knowing I got

Update: Look what I found: Efficiency Score based on miles in a city & miles run

This is a little off topic, but I have been trying find, for the past 60 minutes, a post I came across (after posting the above) about a ride activity getting changed to a run activity so it would sync with CS. But now, for the life of me, I can’t find it…

Personally, I don’t think there should be any policing/labeling/“shaming”, etc, based on stats, trying to nudge some users’ behaviors to be closer to others’ view of the ideal. That just tends to split us as a community, in my opinion.

I would much rather that there be more users (and therefore potentially more supporters), using the site in a way that brings them the most enjoyment. Maybe I’m biased because I started out as a “node hunter” before I became a “street hunter”, and actually found extra pleasure in realizing that even after I hit 100% of nodes, I had actually only run about 85% of the streets.

After I finished my home town to 100% a year ago, I wanted my Lifemap to look more complete, so I ran a lot of footways and paths where there were ”too much” gaps. I have since done two more neighbours to 100%, and now working on Stockholm, just reached 25% (out of 4200 streets). And I’ve always followed the All streets model
But recently I also discovered Wandrer which also includes all footways, paths and cycleways, and found that I was only at 85% completion of my home town. So the last month I’ve been back here working my way up, now at 95%. It will be really difficult, or maybe even impossible to reach 100%, due to the way Wandrer is organized, but I’ll get very close at least, in a few weeks! But it’s so hard that I won’t try it in any other city😅

I think this is a perfect example of how striders can use CS to creating motivating, challenging, and rewarding objectives in their training. It creates a pretty amazing LifeMap also.

I think this behavior stems from having a leaderboard. There are so many different ways we can use CS to motivate ourselves and it’s hard to bundle everyone under a single category. Some may have the most nodes, the most streets, the most parks, the most trails, or even the most mileage in each category. Ultimately, all that matters is we are all being motivated by this great tool, created by James, to complete whatever goals we can come up with and feel a sense of pride and accomplishment in doing so.

Very sensible take. At the end of the day, I’m the only one who cares about my CS goals and about the rules I set myself to get there, same as everyone else who uses the site.

I think this behavior stems from having a leaderboard.

Very good point. I like knowing I was the “first” in some cities, but, and I think I’ve said this before, I’m doing this (CS) for me and my own personal satisfaction.

But, and this is what I said before, maybe even way up there ^^^, to get 100%, you do have run on every street, just maybe not on all of every street… Assuming no manual completions.

I’m enjoying the heck out of CS, even not knowing who is nipping at my heels in Keller.

Keep up the great work James!

@ericjrw
I understand the range of emotions that you feel. Having a leaderboard makes it easy to find striders who are doing some amazing things with their LifeMaps, but not so great when you see groups of striders with different objectives together on a single leaderboard. Running for nodes, running streets, running trails, or even running for total mileage are much different from each other and should be grouped accordingly. Hopefully, some day, the leaderboard will have categories with clear cut rules.

Excellent points @edsheldon. I hope I did not come across as against a leaderboard, was merely stating an opinion (and observation). I’ve been on enough websites, that collect data, to realize there are always going to be people that want to “game the system” and be at the top. It is a fact of our digital life.

I have the upmost respect for CS and James. I am amazed at what he has done, and appreciate the fact that I stumbled across it (pre-pandemic even).

My wife was looking over my shoulder as I was reading this thread, and made the comment that the “node gatherers” should be applauded for their planning efforts. Made me think, maybe there needs to be a badge for that.

I was surprised to see this great thread end on the topic of badges. As I was re-reading the posts, it made me think there should be a badge, and/or leaderboard, for the strider who has the most miles logged in a city.

Would give the idea of re-running a city all new meaning!

As an extension of the new time filter, it would be really cool to have the equivalent of what the ReRun does for activities, but for the lifemap/cities as a whole. For example: set start date, set end date and watch how the activities are added to the lifemap over time until the end date.

There was a short discussion about this over in the Rerun/replay animations thread. There’s now a ReRun button on the page. When you click it, a marker is animated along your activity path. I’ve had to make this a Subscriber-only feature, because it’s tied to map views & those cost

. It’s quite a simple thing, as it stands now, but it can be improved from here… One suggestion was to clear the map of the activity line, to add a layer of ‘discovery’ to the animation. Another suggest…