It’s easy to add nodes in the middle of the block in OSM. Then some people will lose their 100%

If you see someone do this in your city: go to OSM in edit mode and just double click the middle of the straight lines of those streets. It creates a new node. I guestimate you could do hundreds of streets in a matter of a few minutes. Save and savior you evil smile after the next CS city update comes in.

In case someone is actually considering that: As someone who edits OSM mostly unrelated to citystrides, I’d be inclined to report that as vandalism if I randomly came across it. I imagine I wouldn’t be the only one.

@ward_muylaert I’m only asking out of curiosity, but how would it be vandalism (I assume in the OSM sense)? Does it harm the legitimacy of the map, if a way has an extra node (or two)? I understand that, as far as the map goes, it serves no purpose, but does it cause a problem? Since OSM is used by many (other sites and services), from the CS perspective, doesn’t the extra node make the OSM data “better” (for CS)? I realize by “better” it all comes down to one’s own personal goal in regards to CS. And since there will be other ways to “game” the CS system, it really comes down to one’s personal goals. So, I guess, in the end, an extra node or two has little bearing on those wanting to legitimately complete cities.

But then that’s what leaderboards do… Turn things into a competition. There are countless stories of people that want to on top, no matter the means.

I guess that’s why this (CS) is a personal goal for me, and I believe many others too.

Yes, I’m also curious about this. If a street has three nodes instead of two, without any other changes, what would this affect? Is there some aspect we’re not aware of?

I didn’t mean to start a firestorm, that thought about the nodes had crossed my mind hefore.

If someone wants to say they ran/walked 100% of the streets and it looks like that map with just the ends completed, whatever. That’s on them. I just hope none of their friends ask to see the map. “Hey… I thought you said you completed all these streets?”

If you look at CS from a “game” angle, yeah, hit the nodes gets the job done. If you take the purist approach, you’ll want to physically complete it. To each their own. For me, I can’t invest too much into what others are doing. Life’s too short, enjoy it.

@ericjrw @hans1 It is redundant information so it does not make the OSM data better. It is redundant because you are just adding a node with no information on a straight line, there is no turn in the direction of the street or whatever. If Citystrides wants that middle-of-a-straight-line information it is very easy to just calculate a new “node” on the Citystrides end. The nodes in a way are ordered, so you already know how the nodes connect to one another. If you want an extra node in the middle, then Citystrides can easily just average the coordinates of node n and node n+1 (technically there is probably some caveat about the earth being a sorta-sphere, but I would imagine it matters little on the small scale of most streets, if it does, there are more specific formulas still that can be used).

Furthermore, there are JOSM plugins to remove redundant nodes from the OSM data, so at some point the nodes will explicitly get removed again.

@ward_muylaert Thanks for a good informative answer!

calculate a new “node” on the Citystrides end

That is a very interesting idea, and does seem to make more sense than adding “unnecessary” nodes to OSM.

Thank you for your insight!

I’ve recently switched from a B-style completionist to a A-style node hunter to 100% a “city” (have only done a few small suburbs so far). I know it’s slack but I’m

with it and enjoy optimising routes based on hitting the nodes.

Me, too, and my running friend acts like I’m a crazy perfectionist.

Here’s a section of the city they “completed”…

This pisses me off! That is simply not in the spirit of running every street at all! I feel your pain.

I’ve never understood the mindset of trying to visit the nodes, but without having foot fall along each section of street.

It would be entirely fair for someone to add some ‘mid-street’ nodes into those bare sections in order to properly reflect the actual streets.

Like, in the example you showed, the strider clearly ran all horizontal streets and made turns to mark the vertical parts. Who knows how far North/South they ran in reality?

I find it implausible that the gps ‘error’ that would be needed to give such an even pattern of gaps of un-run streets would be so consistent.

However, I find it entirely plausible that a runner deliberately ran with a strategy to minimise the actual distance covered whilst hitting the maximum number of nodes.

In short, I think you’re being too generous with your interpretation here.

Maybe I am, but it keeps me from being too concerned with what other people are doing and just focused on enjoying my own CityStrides journey.

I used to share your view, but there’s a runner in my city who’s been moving up the leaderboard running nodes only. I will definitely be annoyed if he beats me to 100%!

So while my head says live and let live, my heart hopes he gets a pebble in his shoe on each and every one of his shortcut-taking runs 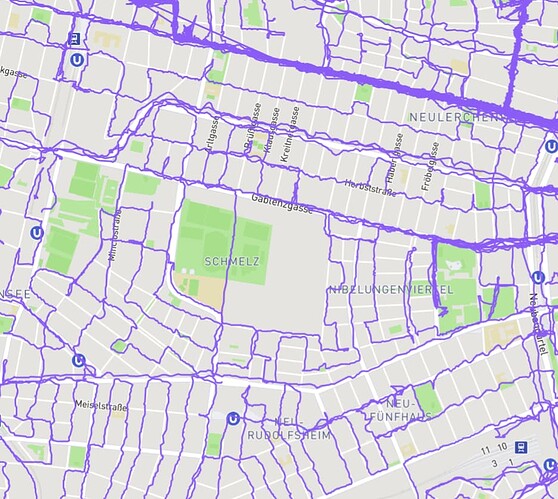 This is another reason I’d love to figure out another way to calculate progression/completion. The node/GPS comparison gets spotty with poor GPS quality and allows this kind of hacking to mark streets as complete even though they’re not.

I’d really prefer to do something that looked at the data from the perspective of paths.

Let it see that the collection of nodes form a line, and then let it look through your history of activities to see if you’ve created paths that completely cover the street’s path.

There’s a host of issues in accomplishing this, but it seems like it should be doable.

Would it be possible to introduce extra nodes in between the existing ones, that is nodes only in CS even if they are not in OSM? Something like ”if two nodes on a way are more than x meters apart, add an extra node in the middle”?

Yeah, if there were some sort of post-processing between OSM and the gpx data grabbed by CS. Likely it would make life even more miserable for people running in cities with poor GPS signal reception though…not sure there’s a perfect solution to this. But again, until there is some actual incentive for finishing a city first or being highly ranked on the global leaderboard, and it’s not clear that there ever should or will be, the thrill is merely in the chase!

The StreetFerret algorithm is now based on segments rather than nodes. Thus, for a straight road between intersections (such as in a gridded city), it is no longer sufficient to run just the endpoints. The algorithm is now virtually adding a mid-point node to all such instances. Thus you may notice a small number of segments turn from green to red if you haven’t actually run the segment. I made this change in order to meet StreetFerret’s goal of giving you the most accurate statistics.

Thanks for sharing the StreetFerret. I like the green and red if you can down a street. I just found a small section I missed in a city.

I know there is a road I recently finished but knew I didnt because I had run both ends. it was a .25 section so it shouldn’t be skipped. I went in and put in a driveway on that and fixed the road so it also had a point in-between so someone else cant miss it. When you look at a road all the points in OSM become nodes.

I personally like the nodes more then just the lines. Its easier to plan out and draw the lines. But no matter what I run the whole street.