I just noticed two towns, Dixfield, Maine and Mexico, Maine, where my completion percentages plummeted. They both just updated from OSM and now there are streets listed that are way outside the town boundarys:

Prior to the update I had only a handful of streets in Dixfield and now I have 68.

Not a big deal at the moment as I haven’t run either town in a couple years nor do I have any plans to anytime soon, but I didn’t know if anyone else is having this problem or may have it as the updates happen.

Update: Found these town boundaries on Google Maps. The added streets make more sense with these:

Maybe they’ll get redrawn in a future update?

It looks like @zelonewolf made some edits about a month ago that adjusted some city boundaries. Woo!

This is great news for handling changes to city borders - it looks like in at least some cases (like here for Dixfield) it’ll automatically pick up the new streets and I’ll just need to regenerate the city border. I just tested this out for Dixfield right now & now the updated border is displaying.

I just queued up Mexico, Maine - it’ll take a minute or two for that city’s border to update. 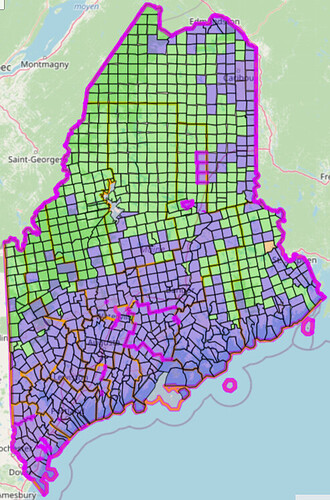 If you are interested in more detail about how this is done, see: Import/Maine Admin Boundary Import - OpenStreetMap Wiki

@JamesChevalier Note that I mentioned this some time ago: Now Testing: City street/node updates - #205 by pedronavf , I updated the Los Gatos, CA city boundaries but they were not imported.

@JamesChevalier // I’m sorry if this has already been covered elsewhere, but I couldn’t seem to find the answer in my searches

I have updated the city limit boundaries of my city (Midland, MI) on OSM at several locations to reflect changes that have occurred over time. Will these changes be automatically picked up by CityStrides next time the server runs through the update process, or are there additional steps that need to be taken? Thanks!

The streets/nodes will automatically make it into CityStrides after the border is edited in OSM, but I haven’t automated the border update (blue line on the map) yet. I just manually updated Midland - does it look good now?

The border is right where it should be now, thanks @JamesChevalier!

All of the border changes I have made appear to have transferred to CityStrides. I also made several changes to streets, but I see those have not updated yet (the ‘Last Updated’ date for the City has not changed either, so I will assume those will transfer when that part of the update occurs).

Thanks again for your quick response and help!!

@JamesChevalier
Hi, I believe I have successfully edited the boundary in OSM for St Albert, AB, Canada from a Jan 2, 2022 annexation(Relation: ‪St. Albert‬ (‪11890349‬) | OpenStreetMap). Is it possible to get this city updated in CityStrides (St. Albert, Alberta - CityStrides)? Thanks,
Joe Helten

Alright, that’s all set.
The OpenStreetMap ID for St. Albert had also changed, so the next city update will probably actually update things.

A post was split to a new topic: How do you update the border in OSM?

A lot of new streets outside of current border.