Hello! Came across a weird one today! I finished all the nodes on a street called Mansionhouse Road, but it came up on City Strides as only partially complete, because it was merged with another street of the same name several miles away! I wonder if there are other examples of this and how they might be separated?

This is a pretty common thing and if they’re in the same municipality the best solution is to run both! But if you don’t plan on getting over to the other Mansionhouse Road anytime soon, in the meantime you can mark it manually complete.

This is a well-known and often-discussed situation.

It stems from the fact that OSM (where CS gets its data) has no real understanding of a “street” so @JamesChevalier has to come up with a way to group things. He uses naming, so sometimes there is weirdness like this.

This is one of many different threads, but it has some good info in it.

Spoiler: I have found almost 2000 of those streets in my hometown alone, and many cities with similar cases. Some street names are so popular that they have ben given several times within the city limits. Typically, it happens when smaller independent cities are re-grouped into a bigger city at some point, a general tendency in the public administration of different countries (in Europe - I don’t know the situation overseas). This issue has been discussed in the past but not in the idea categ…

Thanks for the replies - I did a search before posting but used the wrong terms I think as I didn’t find your other posts! It’s fine in the long run (no pun intended) as I will run both was just curious why it happened in the first place.

My “favorite” version of this is Washington St in Boston, MA. It has six disconnected segments. 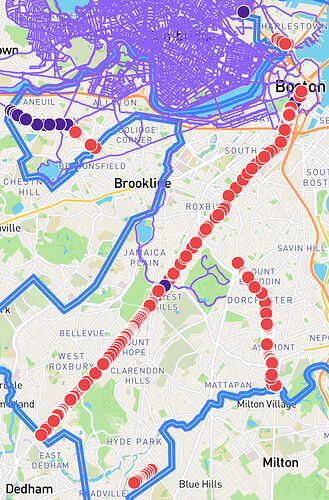 @tev4 I remember when I moved to Boston everyone telling me “be careful to get the zip code right when you’re trying to go to an address on Washington Street with rideshare” and that screen you shared doesn’t even include the Washington Streets in Brookline or Cambridge or any other municipality bordering Boston, which there surely are

It’s much of the same in a rural area or Portugal where the organization is at the county level for a bunch of tiny hamlets. “Rua Principal” basically means “Main Street” https://citystrides.com/streets/14325017

Same here where every town and village has a road called High Street.

A mere 1339 nodes and no one has run all of the High Streets yet? But in all seriousness, start a petition to rename it “Highstreetshire”