I live 5 minutes outside Brisbane and Brisbane doesn’t show up on my profile either even though my LifeMap shows heaps of runs inside the boundary.

I’m in Redland City (east of Brisbane), I’ve got it on my todo list to get Redland’s boundary added to OpenStreetMap, need to get that done to actually make use of this CityStrides.

I do a lot of OpenStreetMap editing and was surprised to see Brisbane even show up in CityStrides because I knew the admin boundary wasn’t defined. It was created yesterday by “Tym K”, so maybe CityStriders is still processing it in the background.

Hi Jonathon, I should have been more specific - I’m not new to Brisbane, but I am new to CityStrides. I’m also new to OSM contributions, so “Tym K” helped me greatly add the Brisbane City Boundary onto OSM yesterday and then James imported it into City Strides… (except it doesn’t appear int he city from down list for setting home city…)

I’m guessing that james’ ‘automagic’ server script to process old activities other takes a while to run, isn’t working, or he forgot to run it for Brisbane.

If you do lots of OSM editing yourself, maybe you also want to grab Redland City from the Qld gov site and add it

I can give you the boundary json file if you want, and then you can do the OSM magic…

No problem, sorry about the confusion, welcome to CS then, I’m new here on CS too.

If you do lots of OSM editing yourself, maybe you also want to grab Redland City from the Qld gov site and add it

I can give you the boundary json file if you want, and then you can do the OSM magic…

Sorry to be the bearer of bad news regarding the use of DNRME data, see my comment on the OSM changeset, we can’t use their data which is why I haven’t imported it, it’ll need to be reverted. A few of us have tried getting them to sign the waiver for years.

oh, I’ll have to check, so why is it licensed as CC4.0 then? Also, since I’m new to OSM editing, how do I check your changeset?

@steveamor12 I’ve sent you an email (as requested) with more detail. The summary for those reading here is that the waiver is required because CC BY 4.0 is more restrictive than the ODbL (used by OSM), OSM needs a clause waived, this wasn’t a problem with CC BY 3.0.

I haven’t made any changes regarding this, do you mean Tym’s changeset, I linked it above.

Hi, I am new to Citystrides and was also wondering why my runs in Redland City were on my lifemap but not being attributed to Redland City, then I found this 4 month old thread. So I was wondering if you or anyone knows if someone has sent a CC BY 4.0 waiver request to DNRMS and if it is likely to be forthcoming?
If it is a QLD issue then I assume someone must have got the waiver ok for Brisbane already and maybe able to help or suggest what is needed to add Redland City?
Many thanks

Brisbane City was incorrectly imported into OSM using DNRME data without a signed waiver and was copied into CityStrides database before it got removed from OSM which is why it remains here. The OSMF are still determining whether we can use the DNRME data without the waiver based on the response from DNRME.

However, OSM got access to the PSMA Administrative Boundaries dataset which has allowed suburb and city boundaries to be imported. I spoke with @JamesChevalier a few weeks back to get QLD LGAs imported into CityStrides (Missing/Broken Cities Tracker - Google Sheets), he’s got all the info to do it, so it is with him.

By the way, great work with your and Blair’s runs.

Thanks for the update @jonorossi, your work is much appreciated

Blair and ourselves have been recording our runs and walks the hard way with Strava maps and Google Spreadsheets, so getting the confirm through CityStrides would be fantastic and will greatly help anyone following in our footsteps.

We are about 1-2 weeks away from finishing walking the Mainland roads and then logistics get tougher as we will need to island hop for a long while to finish off the Redlands!

Hi Alan and Jono again.
Sorry (not) sorry, I’m somewhat involved in the Brisbane saga.
I could also follow up with my DNRME contact to see where this got to, as I thought by now they were going to change their licensing terms. However, good to know about the PSMA boundaries - if James processes that then I can start scoring runs for surrounding regions too… although seriously Brisbane has 13,523 streets and I’m in 2nd place with just 5.84%!!!
See you at parkrun this weekend Alan I’m sure!

@JamesChevalier will you get time to import all of the Queensland, Australia city boundaries?

@jonorossi nice work! I see them ALL in OSM

Hi all, just joined CityStrides. I live in Mount Tamborine, but run locally, Gold Coast and sometimes Brisbane. Only my Brisbane runs correctly show progress. Now I’ve found this thread I understand why. Do you know if there is any progress to getting the boundaries mapped/approved?

It does look like I can import Gold Coast, though I wonder if that’s considered, locally, to be a “city”. Let me know if that would make sense to exist in CityStrides as a city…

Tweed Heads caught my eye on the map - similarly (in the opposite direction), this looks too small to be considered a city. Maybe it’s more of a neighborhood?

Within Gold Coast are many suburbs like Southport or Surfers Paradise.

Tamborine mountain would be considered a town.

Tweed Heads is also a town, but in New South Wales not Queensland.

Anything I can do to help?

@JamesChevalier I think the problem in Australia is (and I’m also talking also about the doubling up of streets when I go for a run now), technically Brisbane (or Gold Coast) is the city and Kangaroo Point is the “suburb”. However, in the last few years when entering address online, we seem to have dropped “Brisbane” as the city and now use “Kangaroo Point” in the City field (even though it is Brisbane). I’ve noticed the browser ‘address checkers’ - including government agencies - work this way. So, now there is confusion.

Looking at this wiki document: In Australia I think the best fit for what you might call a city is “local government regional area”

I believe each of these is a “city” for your purposes…?

I’ve since imported heaps of cities from admin_level 10. It’s produced very good coverage, so while some of the places might be a bit small, it works out overall Australia - CityStrides

I was wondering if after the fixes you put into Australia, would you be looking at extending the admin level 10 logic further afield?

I was just trying to plot some routes for when I go to Wales in a few weeks and was surprised to find no nodes would be completed. When I dug further I found that the area I will be staying in doesn’t exist in CS. It is admin level 10 and a lot of surrounding areas have been added.
https://nominatim.openstreetmap.org/ui/details.html?osmtype=R&osmid=11004884&class=boundary

I think in general for UK you have used admin level 8 and this area doesn’t have anything at that level? I know I have previously added to the spreadsheet my home town which is also level 10 so as it had been done elsewhere, wasn’t sure if it was a question worth asking elsewhere?

I guess it is awkward as at level 10 this area probably has very few streets so isn’t a “real” city but otherwise it doesn’t exist at all.

oh, wow, yeah, admin level 10 across Wales would provide (what looks like) 100% coverage 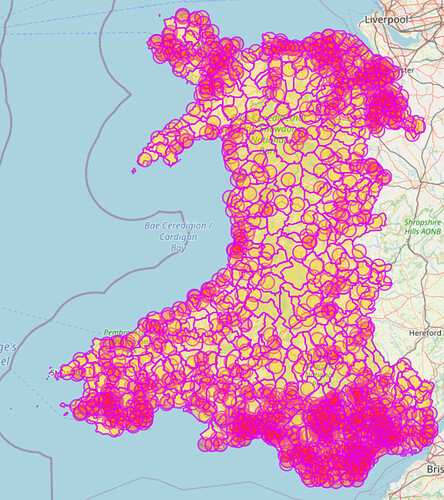 I’ll just add the ‘new’ cities as soon as I can.

As far as I can tell, none of the communities/cymunedau have boundary polygons in OSM, which should be mapped at admin_level=10. Only the “principal areas” (admin_level=6) in Wales are present in the map.

At least my run in Wales won’t be “wasted”. Thanks!

Was thinking more about this while reading the thread on Alaska Towns/Cities? - #10 by jpbari

Not sure how easy/hard it is but perhaps Wales is actually best suited to be at admin level =6 and only go to 10 in certain cases as a nested city.

If you look at the bigger cities in Wales then they all sit sensibly in 6 in OSM.

It would leave some very large areas like Monmouthshire that would be very hard to complete. However, this part of the country is quite sparsely populated and this would get the roads in where there are none currently, and could then add specific areas at level 10 if required/requested (as is currently the case)