Streets on City Strides do not exist

I have experienced several streets that do not exist in reality in my city. I am linked through my Strava account.

In Closter NJ 07624. I have noticed the following:

Davis Street off Cider does not exist. There are houses there.

Cleveland off Lindenburg does not exist.

McKinnley Street to complete must run through the woods. It is a dead end on both ends.

Endres Street off Ruckman Road I have run twice and still doesn’t mark as completed.

Everett Street off Durie Ave does not exist. There are houses there.

I have adjusted everything in OSM, except Endres Street, nothing wrong with that.
Changes should take effect in CS in about a month

Your account is set to private, so i can’t see your lifemap, but sounds like you have missed a node.
Plenty of other people have finished it.

A bit strange though that CS says Endres has six nodes, but I can only see five in OSM. All who have completed it are two years and more since. Could it be some change in OSM where a node was removed, but that change did not CS properly? In that case the others completed six nodes, but now there are only five nodes you can catch. @pfeufer.brian when you look at Endres street, what percentage complete do you have? 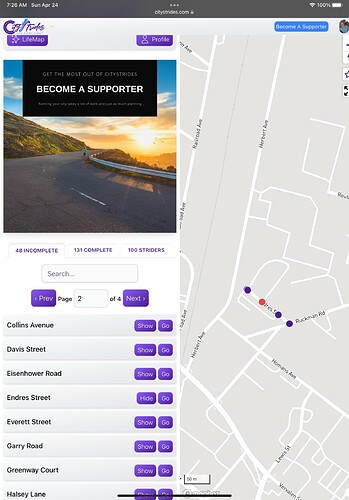 If you click Go for Endres Street you see that it says 6 nodes, but only five are shown, there are two very close at the end

But there you should also see your completion percentage for this street, on tiop just over the street name. Here is an example of a street where I have 24% only 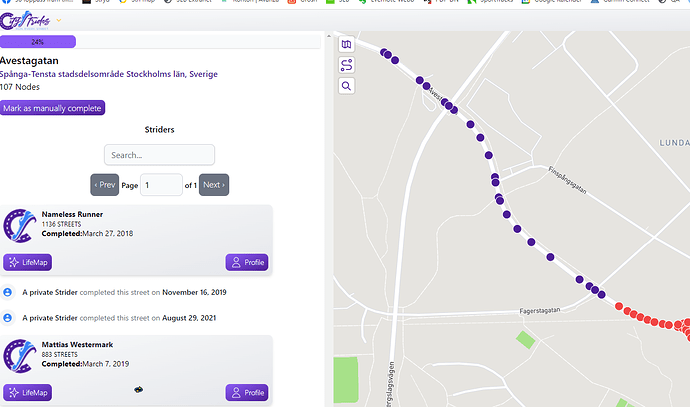 But for Endres St, the node in the middle is red, could it be that your GPS was way off at that point, so you just didn’t catch that node? If you open your LifeMap and zoom in on that area, what does it look like?

Thanks. I do see that second node bunched on the other. It’s strange it marked the first two and the last two but missed the middle one considering it is a dead end street. I’ll have to check the life map and see what the GPS looks like. I’ll just end up trying it again.

Thanks for the feedback.