On looking at my CityStrides data today, it is saying I have completed 2787 streets, which is roughly double what I have actually completed (and double what I saw the last time I looked).

I am now seeing a whole lot of suburbs listed as cities (which I didn’t before), which are actually components of the real cities, and it seems that streets are being counted under both suburb and city. I see there has been some previous discussion about double counting, but not recently, so wondering if this is a newly introduced issue?

If I recall, @JamesChevalier had to manually change the road count from nested neighborhoods/suburbs to not count based on people telling him - I know I did it last year for Lisboa and its freguesias. Not sure if this is still the case.

I have noticed this today when I look at the folks that have run the most streets in a week/month - the top folks, when I go to their profile and look at the data for high street days, have double counted streets. 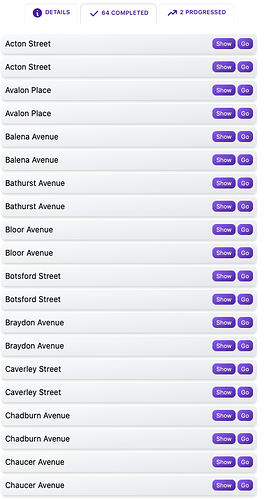 I am now seeing a whole lot of suburbs listed as cities (which I didn’t before), which are actually components of the real cities, and it seems that streets are being counted under both suburb and city.

Are you in Australia? I just imported heaps of cities, getting CityStrides to 100% coverage. That would’ve resulted in some nested cities.

I just finished running the code that properly sets those up, so you shouldn’t see duplicate street completions any more (but you can still work towards completing either parent/nested city).

This is all a bit much & I’m rushing to write this up before grabbing dinner, so let me know if you need anything clarified.

Hi James, thanks for looking into this, sorry if I’ve thrown the cat among the pigeons! Yes, I am in Australia and I am still seeing duplicate completions. Interestingly, my profile says 2653 streets completed, while the “completed streets” screen says 2807. Both are roughly double the actual number.

sorry if I’ve thrown the cat among the pigeons!

William Skorupinski (who you cited) has his streets double-counted when they exist within both of these overlapping “cities”:

Morrison Road is a good example. This is in the City of Ryde and runs through three separate suburbs within the city - it appears four times on my completed streets list.

Alright, I’ve cleaned up a bunch of those.
For some reason my query that finds whether or not a city is within another city isn’t picking up a lot of these places…

I do think you should expect to continue seeing duplicate streets listed in completed/progressed lists on your activities (the ‘Go’ link is your friend, in determining where the street exists). Your counts should decrease, though.

I’m in Brisbane, Australia and today my streets run are all counted twice. This was my run today 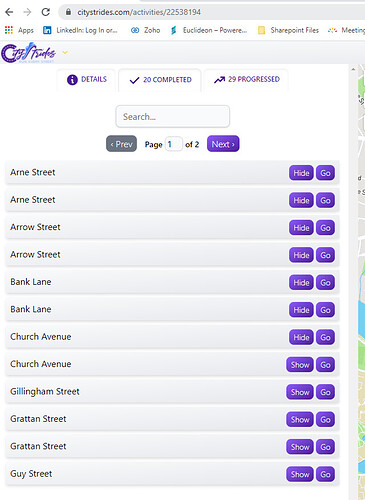 image640×876 118 KB
I see you have recently imported a new Brisbane map from OSM and now I get suburbs as well as city. So I assume each road appears once in Brisbane City and once in the suburb.
JamesChevalier (James Chevalier) April 15, 2021, 1:08am #11

It’s late in my day, so my brain is a bit fuzzy - but I’m pretty sure that the lists will still double-up but the counts take nested cities into account.

It all gets extra funky when certain counts don’t care about nested cities.

If you look on your profile page, the April 14th activity displays 8 completed & 16 progressed … then if you click into that activity it displays 20 completed & 29 progressed. This is because I’m showing you all the streets you completed & that count is based on the core paginated data … whereas the count on the profile page is a specific query that ignores nested cities. 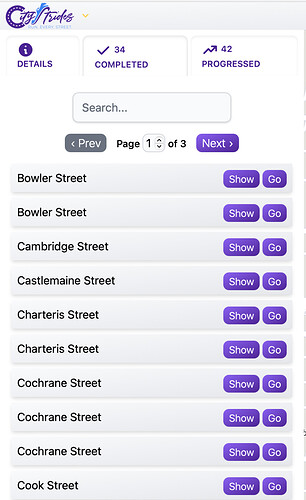 Why is Bowler Street counted twice, Cambridge and Castlemaine Streets both once and Cochrane Street 3 times?

I can understand maybe each street appears on the activity list once for each “overlapping city” and then once for the “parent city”, so for example Bowler Street is in “Brisbane” and “Paddington”, so that’s twice.

But by the same logic Castlemain and Cambridge should also be within “Brisbane” and their respective suburb, so they must appear at least twice? yet they only appear once?

The other problem is, these are not “nesting Cities” - “Paddington” is a suburb of “Brisbane City”.

But by the same logic Castlemain and Cambridge should also be within “Brisbane” and their respective suburb, so they must appear at least twice? yet they only appear once?

The 3 times is because your run intersected two different zones/suburbs/areas (Paddington and Red Hill) that are nested in the parent city Brisbane. So building on what I mentioned in the previous post, the Cochrane Street that enters both Paddington and Red Hill appears to be the only Cochrane Street in all of Brisbane, therefore you completed all 3.

The activity page counts the multiple streets because it just adds up the streets completed across all zones, nested or not. But for tracking/ “stats” purposes, only the parent zones count, so that 9 completed is towards Brisbane.

Yeah, sorry. The nested city situation is tough to get exactly right…

Why is Bowler Street counted twice, Cambridge and Castlemaine Streets both once and Cochrane Street 3 times?

The activity page data is displaying everything, regardless of whether or not the street is in a nested city. That’s why the numbers are different when you view the activity from your profile page (that view is not counting nested cities):

The other problem is, these are not “nesting Cities” - “Paddington” is a suburb of “Brisbane City”.

Paddington is a nested city. Just under its name in the top left, it indicates that it’s nested in Brisbane & links out to Brisbane.
A nested city is any city whose boundary exists entirely within another city’s boundary.

The next release will include the street’s city name below each street name, except on the city page.