Street not marked as complete

This morning I completed a street, getting all nodes and when I click on it, it shows I’ve completed 100% but the street is not among my completed streets and it even shows no one has completed this street yet. 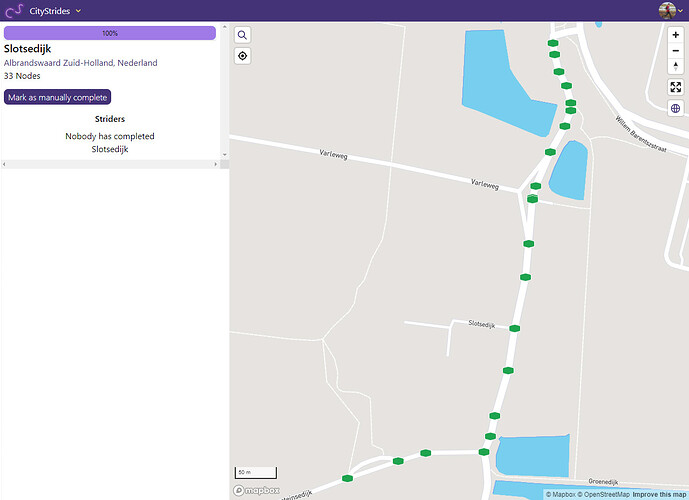 I have had exactly this on three streets this week. I checked on OSM and all three are categorised there as “tracks”. I understand James’s last OSM sweep excluded “track” from his query. Those named tracks had previously been captured by OSM sweeps and now seem to live in an orphaned state - you can collect their (remaining) nodes and get to 100% but they never switch to “Complete”.

Here is an example. Landford Waie once had 17 nodes, and becomes a “track” at the fork heading west. James excluded the track section, leaving 5 nodes. I have done them all 5, and so it shows 100% but somewhere in the CS code it is expecting me to do all 17 to switch it to “Completed”. Only I cannot get the remaining 12 as they’re not in CS any more!

Your street looks similar as there are a lot fewer than 33 nodes shown on the map. I presume some of the other parts of Slotsedijk were once recorded by CS but have subsequently been partially ignored.

That makes sense, thanks for your replies, I haven’t figured out how to check if the Slotsedijk is also a “track” in OSM though.

Parts of Slotsedijk have different classifications in OSM:

My guess is that some/all of these components were included by CS in their scrape of OSM, in addition to the 21-node section present now. That previous scrape by CS found 33 nodes.

It is a recognised CS bug which sees the map and “percent complete” using the 21-node data, whereas the “completion” flag is using the 33-node data. Unfortunately you’re unable to complete the 8 nodes to make it complete as they don’t exist in the right place in CS any more!

James has fixed this, and the numbers should all be consistent after the next OSM scrape for your city.

Thanks for your answer, that makes sense!