Willow Rd exist in the same area, so it shows up as one road: Rue des Moissons - CityStrides

@JamesChevalier I am also having this problem. There are lots of streets in my district with the same names and so they show up as being the same street, even though they may be in separate small towns dozens of kilometres apart. Is there anyway to correct this?

I need to see the “two cities” aspect of this somehow.

I’m not aware of an issue where a street not in a city is connected to a street in the city. I’m expecting that there’s at least one node within the city boundary, here.
If that’s the case, then both issues noted above “solve” this for us.
If that’s not the case, then there is something New and Weird happening.

If the district is the citystrides unit, and the small cities are all inside, this would be the same case as two same-name streets in a city, no? @nicola.armstrong would you mind sharing an example?

The most disjointed street I found so far is this

here is an example of a street in 3 places in one city. This is from recent history, where this were 3 independent cities. They merged into one this year.

A post was merged into an existing topic: Some Streets contain Nodes outside of City boundary

Do I understand this correctly: if there are multiple streets in one city with the same name, then the street will be shown as incomplete until we complete all three streets with that name? The database can’t somehow tell that they’re far apart from each other and treat them as separate streets?

Do I understand this correctly: if there are multiple streets in one city with the same name, then the street will be shown as incomplete until we complete all three streets with that name?

The database can’t somehow tell that they’re far apart from each other and treat them as separate streets?

Not at this time, good idea, though

The most disjointed street I found so far is this

Wow, and I thought I had it bad with Waterford.

I did manage to run the TWO pieces.

Try this one: Hauptweg in Berlin, Berlin - CityStrides.
24 pieces, but I am not even sure.

And I am struggling on the 12 pieces and 935 nodes of this one: Hauptstraße in Berlin, Berlin - CityStrides

That’s some lazy naming by the city planners

The weird thing is that based on this there “should” only be 9x Hauptweg and 7x Hauptstrasse, where do the others come from

. There is also a significant discrepancy in the street count totals, it will be interesting to check what’s missing once the city has been updated in CS to make sure the query isn’t missing anything…

That’s some lazy naming by the city planners

In some cases it isn’t lazy planning as much as later consolidation of existing cities. Neighboring cities could use the same street name. Later the two cities merge.

My city has a different problem. They sketched out a grid for the city, naming the roads on the grid. However, the developers never built all the roads. So you end up with a road with gaps. Additionally, when the University wanted to clean up their campus, they closed certain roads. So there’s a gap where the University now sits. (And after a while they tear up the road and plant stuff so you can’t even tell there used to be a road.)

this is definitely the case here, the street names are “main road” and “main way”. Do the never-quite-finished roads in your town show up on CityStrides? On OSM?

Not as a contiguous road. OSM doesn’t even know what a road is, just segments of roads. Unless someone added roads based on plans, it should be there.

As for CS, since the original data came from OSM, whatever errors were in OSM when imported to CS would remain in CS until the data upgrade project is completed. 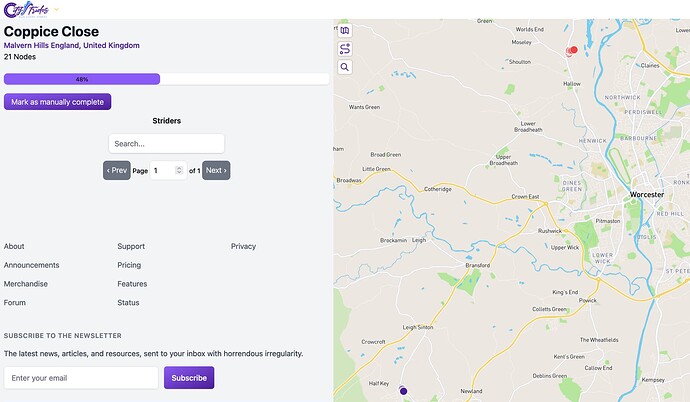 I just had this happen to me again, and I had flashbacks to this issue

The link for the roads is here: Coppice Close - CityStrides

And… I just found another one, I am not sure if it is helpful at all to report them, I suppose they could be used in your testing? @JamesChevalier 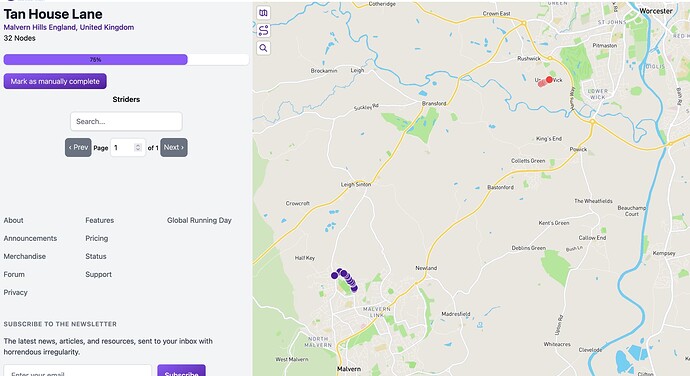 This is a long-standing known issue with some very large cities.

OpenStreetMap doesn’t have a concept of “streets”, it only knows about “ways” which are sections of roads. I have to piece these together within CityStrides, and I do that by matching them on their name.
If a city has two streets with the same name, CityStrides joins them as one street. I don’t currently have a workaround/fix for this.

From the other side of the water, researching online, it does seem like Malvern Hills District shouldn’t be a city. It seems much too large, and even its name suggests it’s a collection of cities and not a single entity.
There is full coverage in OSM one level down, which would bring in cities like these randomly-selected examples:

Update: All of the smaller cities (admin level 10) are now imported and being processed. Malvern Hills District is being deleted. There aren’t any other cities that include “District” in their name in England, so that should be sorted complete. (queue narrator’s voice)

You’re the local, though - does it make sense to drop Malvern Hills District and instead import these smaller areas as cities?

Me and my girlfriend did actually talk about that the other day when I showed her my LifeMap, I do think it makes the most sense to split them up as invidiual cities.

I do think it makes the most sense to split them up as invidiual cities.

Should Malvern Hills District be removed from CityStrides?
I ask because I can’t quite tell - or at least I don’t feel comfortable making the decision - whether it’s similar to Greater London, England - CityStrides which arguably should stay in CityStrides & keep its boroughs as nested cities.
My instinct is to remove it because it’s not a “city” (or doesn’t seem to be based on its name), but I don’t like making these decisions as a non-local.

Should Malvern Hills District be removed from CityStrides?

Yes. I’d recommend removing the district and create the boroughs.