Routing through the Ottawa River 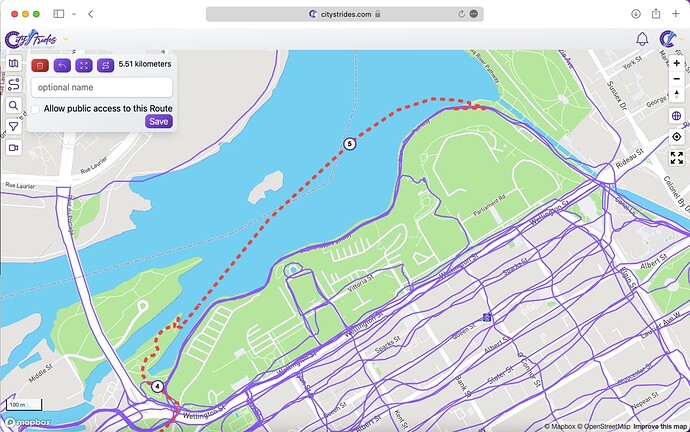 I wish I’d made a note of exactly when, but I’ve also been having routing issues as of late, the last month or two I’d guess. Route builder refuses to let me plot on some main roads in my city and I can’t figure out why from the OSM coding of the streets. In one case of a road I always run the tool refuses to allow me to run east but will let me run west…the road is a bus/taxi only but I don’t see why that would matter. More tedious than truly disruptive as I can overcome these issues with the manual override.

Would you mind creating a route that does this & checking the box for “Allow public access to this Route” and sharing that URL with me?

I did recently change routing providers, which seems to match the timeline you noticed @kevincharlespels … I’d love to have concrete examples that I could pass along to their support team to see if it’s anything that either A) they can fix or B) I can adjust in my route queries.

Here’s a link to a route that suggests taking a dip in the Ottawa River. This route was created with just 2 points, the start point and the end point:

@graeme.banks I have to ask, but is there a ferry service there?

PS. Nothing to do with CS, just curious.

No, and it wouldn’t be a very useful spot for a ferry. Crossing the river is only done via the bridges that you can see in the map.

My first thought was that it had something to do with Google Street View since they drove a boat along that section of the river last year and added the resulting images to Street View but the route doesn’t quite match up: 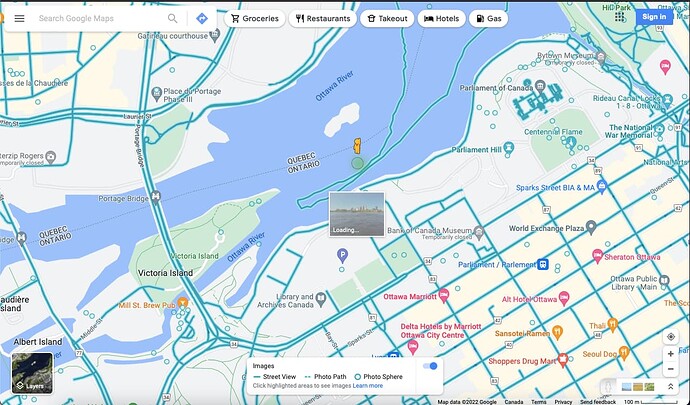 There is a ferry route in OSM with access foot=yes, so this is chosen by the route provider. I have the same situation at home when I use Google Maps for running, as I live on an island with one bridge and one small ferry.

I stand corrected. I wonder if it’s a tourist ferry because there’s no car access at those points and there’s no reason to take a ferry that short distance when there’s a multi-use path right there.

I’m curious now. I’ll have to look into this further.

If it is a tourist/sightseeing ferry and not a « commuting » ferry should it really be included in OSM since it’s more of a tourist attraction and less of an actual route?

Well OSM really likes to map everything, and tourist attractions sure do get mapped. If CS, and others, are picking it up, it sounds like either tags are not correct (ideal?), or routing software fails to consider them.

As @JamesChevalier said earlier, he should be able to adjust his query to exclude ferries

I haven’t tried editing OSM yet so I have no idea if the tags are “correct” or “ideal” but at least there’s some logic behind the routing and it wasn’t just directing me in to the river for no reason.

Thanks everyone for your responses.

@JamesChevalier I would vote in favour of omitting this “ferry”, and probably all others, from the routing algorithms if that’s possible.

I contacted the routing service support team, and they were able to help me try to avoid ferries. If the only way from point A to point B is via a ferry, it’ll take you on the ferry. Otherwise, it’ll avoid them.