One is Pettigrew Road in Kittery Maine (https://citystrides.com/streets/844231). This was originally mapped as a road that connected to different streets, but the reality is that Pettigrew turned and dead ended, and from the otherside it was a private drive way and the roads do not connect there is a giant house between them. So I fixed it on OSM and it updated in CS, but the nodes did not update. 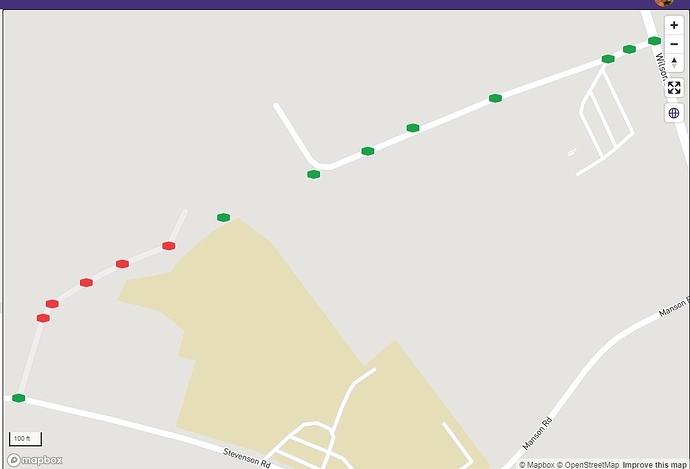 The next is Cate Street in Portsmouth New Hampshire (https://citystrides.com/streets/426624). In this case the street moved and the former location is now fenced off and a construction area for some new condos. The street and new walkway have updated, but the nodes did not move. 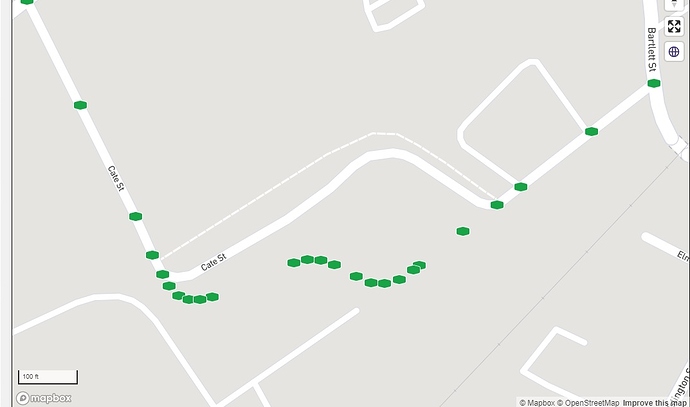 however they are still listed as manually completed

The system does go back and reprocess manually completed streets, so I would expect those to switch over. How long did you wait after noticing the nodes were marked as complete?

if I unmark as manually, they show uncompleted

Yes, for some amount of time - but these unmarked streets are reprocessed, similar to the global update code - so they should also eventually be updated (marked as complete by the last activity to reach 90% of its nodes).

A little bit of waiting is involved, but most of the queues have been pretty speedy lately - so I wouldn’t expect it to take that long.
It helps me to have links to a street or two that you think should be completed & a link for an activity that should have completed it. It’s easiest when there’s a single activity that completes the street in one go, but that’s not too common for these manually completed streets.

The global update code hasn’t run against Kittery, yet. When it runs, these changes will be brought into CityStrides.

If you like the idea of updates, check out (and perhaps vote), on this idea: Last update date for cities

It’s been 3 days since you ran the update I believe…I wonder if it’s possible you ran the update before OSM processed all my changes. Regardless you can see 17/20 of my manually completed streets have 100% green nodes now. Here is an example: https://citystrides.com/streets/14566100
and here is the activity in which I completed that street: https://citystrides.com/activities/15638128

Confirming I have voted for this. Would be very beneficial in understanding the impact of Striders changes in OSM on their CS activities.

It’s easiest when there’s a single activity that completes the street in one go, but that’s not too common for these manually completed streets.

That’s an ironic statement, because the streets I am marking as manually completed are almost entirely comprised of dead ends with only 1 or 2 nodes and the street length is simply too long and the node falls in a private driveway so all of mine are completed in a single activity.

I have found several locations with private roads, and gates. Sometimes OSM has the road as private, but is missing the gate. I have noticed, if I add the gate, the “public” part of the road now ends at the gate, and can be completed, by running to the gate.

However, the above location was found after Keller ( https://citystrides.com/users/14290/cities/14388 ) was updated. I’m going to wait until I see the rest of Keller before I request another update. I’m close, only 26 streets left.

I’m hoping to finish in a week or two… One street is going to be tricky, as it’s long… I have bits and pieces, but am missing much.

@JamesChevalier - great addition to the site including the last OSM update per city. I Noticed for Fairfield the date is May 15th, 2020 but based on this thread, I think you updated it more recently. Having said that, I still see all the streets I completed using GPS shown as Manually completed. Any idea on these 2 issues (Last OSM update, date and why my manual streets are not switching to GPS?)
Thanks!

I Noticed for Fairfield the date is May 15th, 2020 but based on this thread, I think you updated it more recently.

I had the date being updated further up in the process, and when I manually sent it into the queue it skipped that step. I’ve now moved the last sync date setting down in the sync code, where it should’ve been in the first place. The next sync will fix that date.

I still see all the streets I completed using GPS shown as Manually completed.

I figured out the problem…
Fairfield got updated, but it looks like it was updated while the bad code was still in place - so I expect there might be some zero-node streets & streets with incorrect node counts. This incorrect node count was causing the streets to still register as incomplete. When the code that resets manually completed streets comes across a street that is still incomplete, it skips over it (leaves it manually completed).
I just reset the counters for Fairfield and re-ran the data reset for your account - your manually completed street list should be clean now.

I was able to add the gate, but how can I mark the second part of Lund Ranch Road (after the gate) as private?

If you select the road on one side of the gate and both sides are selected, you need to split the road at the gate. Click on the gate, and you’ll see a pair of scissors. When you click on the scissors, then each side of the road is separately taggable.

Select the private side, then look at the tags related to that piece of road. One of them has to do with access (separated by car, person, etc.) Just change the access to the appropriate value.

@luis1981, [If you didn’t already figure it out] Left-click on the gate for the scissors.

Took me a while with OSM to learn this trick… I also think from @fredrik.coulter!

Thanks a lot Fredrik!

I put the values: Access: Private and then foot, motor vehicles, bicycles, and horses: no

Thanks Eric! Let’s see if I did that correctly and when those nodes are removed from Citystrides

@luis1981 You are welcome. Now it’s time for the waiting game. If you didn’t notice, each city now has the date listed it was last updated from OSM. I don’t recall if there is an expected interval, but I seem to recall reading monthly.

I’m waiting, patiently, for the next update to Keller, which hopefully will fix these things, and have me at 100% I’m rater excited.

Thanks, @ericjrw. Last update on my city was 8th-Oct, so hopefully in the next weeks it will be updated