Today I ran in Lyss BE, Switzerland and thought I completed some streets. After I saw, that some of them weren’t marked as done. After clicking “Go” I saw, that the village nearby has a street with the same name which I didn’t run though. This is an error I think.
Example: Bahnweg - CityStrides

I’m not familiar with your area but according to the data pulled in from OSM, both sections of Bahnweg fall within the borders of Lyss, Bern/Berne - CityStrides. Below is roughly marking where the split sections of the street are. 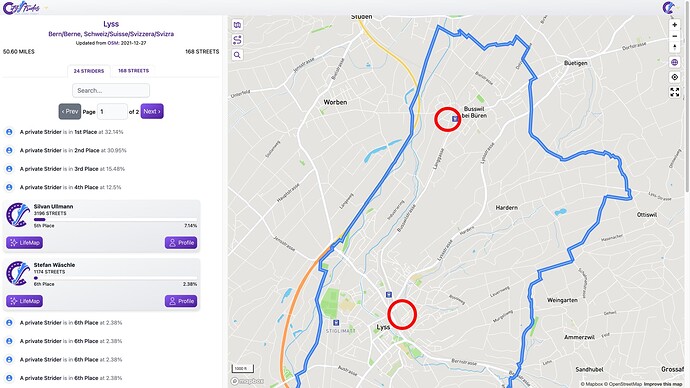 Thanks for your answer, I suspected something similar.
Your statement is correct as Busswil has joined Lyss a few years ago. But it is still named ‘Busswil’ though it belongs to Lyss. Another question is: How reasonable is it to treat streeets as one that are kilometers away from the other?

How reasonable is it to treat streeets as one that are kilometers away from the other?

I think it’s pretty reasonable for the purposes of CityStrides & ease of storing in a database. Even if they were treated as separate streets, you’d still need to run both in order to complete a city.

Historically the separate sections could have been a part of one long street long ago. Over decades the city may have grown and developments split the sections but they kept their original name. In that sense I think it makes sense to treat them as a single, split street.

The underlying issue is that OpenStreetMap (my data source) has no concept of “streets”. It only understands “way” records. I create the concept of streets in CityStrides by joining up everything with the same name within a city.
Sometimes that’s wrong, but it was the best I had (while also considering maintenance & actually releasing code).
Another approach, if I suddenly find myself with lots of free time (Narrator’s voice: hah), might be to store the way records in my database & create relations between those that form a full street (maybe even initially creating this relation via duplicate name) … then put into place some process that would allow ‘breaking’ that relation (and have this ‘break’ persist across updates from OSM). So in your example, I’d be able to view the different way records that comprise Bahnweg & mark them as not a single street.
This is all very much in the “good enough” space, though. It’s a little irritating in places, but overall it “works” enough that I feel it’s better to put my time & effort into other things like making the Challenges actually nice to use.

create relations between those that form a full street

I think that might create more problems. For example, the street I live in crosses another street and continues on the other side, but it is not exactly lined up. So the 2 ways don’t share any nodes. This is actually a very common scenario because the section in between might not be imported into CS with the same name, or not at all.