I have looked through the ideas and cant see anything similar, however feel free to moved if i have missed it.

I use the lifemap overlayed with my city to see where I have and haven’t been so far, typing in road names to see the nodes (sometimes node hunter) to help me plan a route. The planned route I map out in MapMyRun and save, which listing all of the street I will capture on that run in a spreadsheet.

I plan these out weeks in advance and on any particular day and look down my list of planned routes and select one that is a suitable length for that day.

It would be really useful if when I was searching for roads in CityStrides to be able to flag them as Planned, much like the manual completion, that turns the node yellow (or any colour) and that way next time I sit and have a planning session I can see of those nodes that I have planned but not yet run and therefore do not need to plan it into a future route.

I have no idea if this is a huge amount of work or storage for you to keep track of?

I see the implementation as a button like the manual complete button but that is shown on the city view, that can flag a road as planned, it will not count towards my completed roads total, and will automatically turn green and move to completed when it is run.

In the example below
Abergavenny vs Abergaveny is obviously a typo and needs fixing but it serves my example well.

The street that has been planned has changed the colour of any nodes associated with it. so next time I look at the map I will see I dont need to run down it as I have it on a plan somewhere. 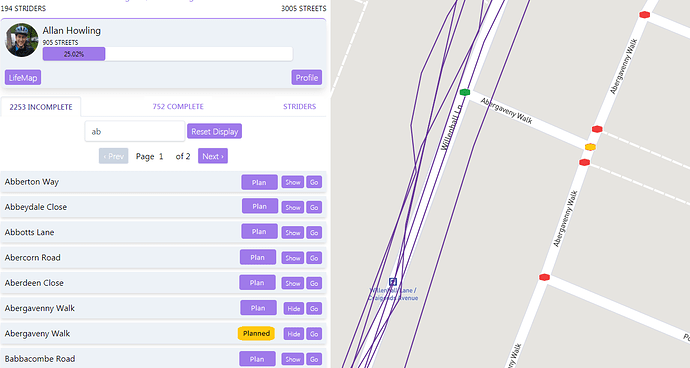 Does anyone have thoughts on this?

If it was an easy thing to implement the ability to flag different roads different colours, may appeal to some people although not to me, much like how some people flag different emails as priority or needs reply, the colours can have nay meaning it is up to the user.

It would also make for a good 4th tab on the Incomplete, Complete, Striders line. Which brings me to an idea I’ve been working on: A tab that essentially means “No nodes”, i.e. never “progressed”, not even one node. Anyway, that’s my todo, to type that idea up.

Oh, I’m kinda new, and so far my “planning” involves printing small maps to bring with me. I don’t typically carry my phone on runs, but my addiction to CityStrides may eventually force me to rethink that.

@howling0_strava You plan specific routes weeks in advance?!?! I don’t even know what I’m having for breakfast tomorrow. Kudos to you on your organizational skills.

Alas I don’t think the average CS user is as organized as you. Speaking for myself, I review CS to see what streets I want to hit next and then I use another platform’s route builder (ex: Strava’s) to draw out the specific route for the day (or next day at most). When it comes to during the actual run, with Strava at least, I can have that route overlaid on map during the recording (if I record on phone) and it will overlay my run’s progress over the planned route. From there it’s just following the preplanned route. Strava’s route builder doesn’t have turn by turn (which if you want to dig around in Strava’s community forums, it’s been mentioned and requested for) but I know others do (ex: RunGo).

In regards to having a Planned button & different node color as a visual for yourself of streets you already have scheduled, CS wouldn’t know when you have that planned to complete. It doesn’t have a route builder and I haven’t seen any mention of that in the future roadmap. At a certain point, if you miss any planned days/routes (cause we are runners and injuries seem to come out of nowhere or bad weather happens), those streets/nodes will still be marked as Planned. These streets would stay flagged in that state forever until you complete them. You could end up with large amount of streets as planned and at a certain point that could cripple your organizational plan.

Yes Eric adding to that page would be useful too.

Marty,
Maybe I was a little misleading, I look at a map and spot an area that is looking a little bare, then plan a route through it capturing all the roads cross referencing with CityStrides, this is the point I would manually mark city strides as planned, as it is now on plan, that is then saved with an arbitrary name and added to a spreadsheet, then on any day I fancy I run I can look down my list, pick the length of run I fancy and do it, at which point it would be makes as complete on CityStrides.

I would be happy for all of the streets to stay yellow as planned for weeks or even months, it is just an indication when searching for a route that I have it on a plan somewhere and I don’t actually need to plan it into another route.

The image below give an example of a route I had planned and I happened to run yesterday afternoon, I have another dozen or so to choose from today, tomorrow, next week etc. 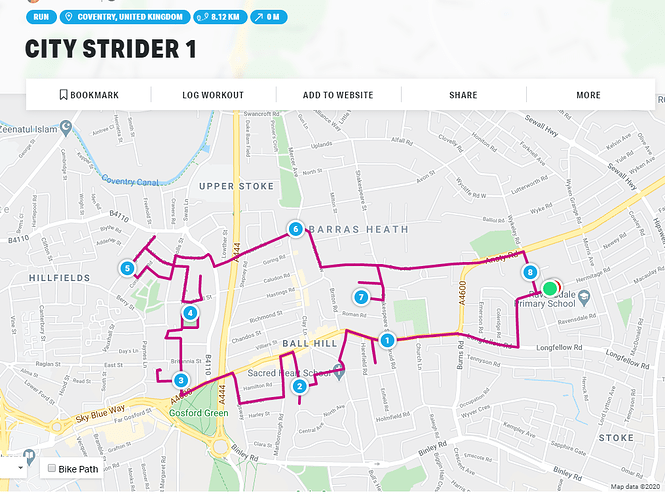 I think we have a similar process Marty, I happen to use mapmyrun but in the same way as you do in terms of mapping a route and then following it as I run, I think the only difference is I tend to have a few planned in advance.

Citystrides doesn’t need a planning tool for this to work (although it would be incredibly useful!!) Its just manual flagging system for roads that gets cleared once the node is completed.

I clearly have to get more efficient in my planning!

Each to their own!

It’s all about what works for you, not sure if my engineers mind but I’m often looking for a greater efficiency, spending ages planning and plotting routes is not efficient but as sad as it is I do like a good plan.

You may have noticed in the spreadsheet above row 4 is the average distance (in Meters) I have to run to complete one street on that particular route plan, it helps encourage me to add more nearby streets if I have a long run to get to that part of the city. Could be reduced significantly once were allowed to drive out to exercise again.