How long does it take for OSM edits to display in City Strides? I recently shortened a street because of an inaccessible node, however the change did not reflect in City Strides. I was thinking maybe I missed a part of the process or maybe there is particular day of the week in which syncs took place or that my edit was one in a long queue of edits and I just needed to give it more time. Either way can I find out why my edit hasn’t reflected in CS?

Cities update every 6-8 weeks usually. You can see the last time a city was updated on the city page:

I think James mentioned in another thread that city updates are delayed right now due to an issue with the process. Note that your updates will appear on the map itself before the city updates on CS since the map is sourced from Mapbox.

@AndyS is correct with one clarification:

Note that your updates will appear on the map itself before the city updates on CS since the map is sourced from Mapbox.

Mapbox and CityStrides node data are updated separately, and Mapbox is indeed updated more frequently than Citystrides data, but there could be, and have been instances where due to their differing update methods, the node data could be updated prior to the visual map. Not usually, but it is a possible situation that confuses people in the rare instance it happens.

In the past, CityStrides has updated just about monthly (every 4 weeks), but most of my cities are going on around 8 weeks+ without update at this point. 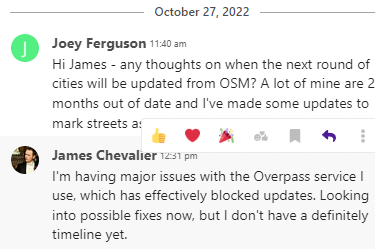 I keep track of some cities just to have an idea when to expect next updates. The few most recent ones of those I track:

So it has been slowing down slightly, possibly related to the issue mentioned above.

Thank you to everyone that responded. I have a better idea of what to expect. The last update to the specific city in question was 8/28. I’ll keep an eye on that page.

As a piggyback to my original question. I have several cities not showing 100% due to map errors. If I manually mark streets as complete, make edits in OSM, and then the CS map updates, will the street still show as manually complete or will it complete the street based on the nodes? I would rather it not show manually complete.