I have made a couple of changes a couple of weeks ago in Stockholm, and expected this to show when Stockholm was update on Sep 19, but nothing has changed. Two examples: 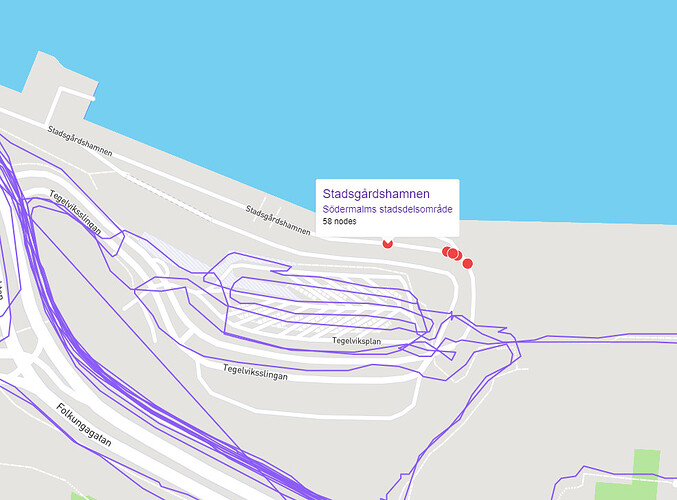 image985×727 131 KB
The red nodes in NodeHunter on Stadsgårdshamnen are set to access=customer in OSM, as they are behind gates. But then Stadsgårdshamnen is on my Completed list, with 100%. So there is some inconsistency
And this one, I have deleted the street Archimedesgränd in OSM, as it’s now a gated construction site. It’s not visible anymore in either Completed or Incomplete. But in NodeHunter it’s still showing as red nodes 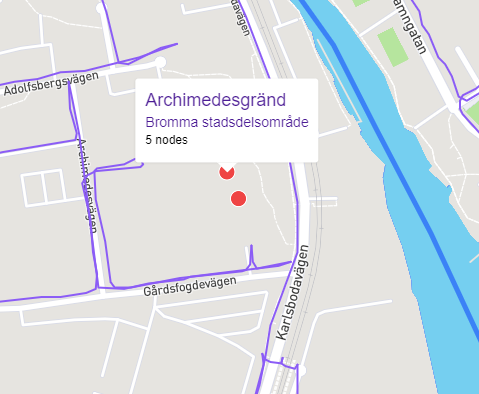 Here is an interesting thing that since Stockholm also has a bunch of nested cities, which have not yet been updated, if I look at Bromma Stadsdelsområde I can still see this last street. Archimedesgränd Archimedesgränd - CityStrides
But that shouldn’t affect the situation, should it?
ericjrw (Eric Wes) September 21, 2022, 5:10pm #2

@hans1 Per this, “customer” is not imported: OSM Basics

See the “Note” in the “Private Streets” section.

Yes, that’s my point😁. It was previously access=yes, but as behind closed gates it’s not possible to reach. So a few weeks ago I changed it to access=customers, which should make it disappear from CS. And now after the update it seems it has disappeared partly, as in the Complete streets sections. But it’s still showing up as red nodes in Nodehunter

Got it. I figured you knew the ins and outs, but (I) was confused.

I just pushed Södermalms stadsdelsområde, Stockholms län - CityStrides through a sync now, so let’s see if that cleans up the node situation for you.

Yes, that seems to have cleared the situation! Thanks!

2 posts were split to a new topic: Update nested/parent cities at the same time

I think this is related to an issue I noticed. There are several streets that I edited over the last month and my city just recently sync’d again:

Fist, a side question. The city sync’d early in July, then around August 8th, a little later in the month. This month, it was on the 23rd (today). I haven’t figured out if there’s a pattern to the schedule.

Now to my real point, streets like “Aspen Lane” are private. I edited it on OSM and it still shows an not ran after a sync.
Another street is “Boxborough Lane.”
They are both set to access=residents and private=yes. It seems that is only residents can access it, I should stay out. Regardless of if this is in the CS filter, maybe it should be? I’m not sure I feel like re-editing all those streets to change the access flag then wait for it to sync again… I’m so close to 100%!

Feedback on recommendations is welcomed.

I can see you edited Boxborough Lane on Aug 16, and Aspen Lane on Sep 23 - and Greece Town was updated from OSM on Sep 23, so depending on which hour Aspen lane might not have been included in the change.
But that doesn’t matter, as the tag access=residents is not used in the query from OSM. All streets are included except access=private, access=no and access=customers. The tag private=yes is not looked at. So your combination won’t make any difference in CS: The normal way to handle such streets is access=private

I think this is the relevant topic for this problem.

I deleted a street from OSM, as they are building a complex on top of it. The 23/9 synch with OSM for Brisbane, Australia has visibly removed the street from the map, but the street and nodes still exist in CS. The image is from the nested suburb of Wacol (no sync since 2/9) but it shows the same for Brisbane and Wacol. Does this just need the nested suburb to be synched, or is it something else?

Yes, this looks exactly the same as my issue in Stockholm. It seems things will look a bit screwed up until both the parent and the nested city is updated from OSM