In Colchester, Rutka Lane does appear on Google Maps, but does not actually exist. I knocked on the homeowner (Mr. Rutka)'s door and got permission to run on the cleared out portion that would have been Rutka Lane.
What appears on CityStrides and Google Maps is actually just someone’s driveway. 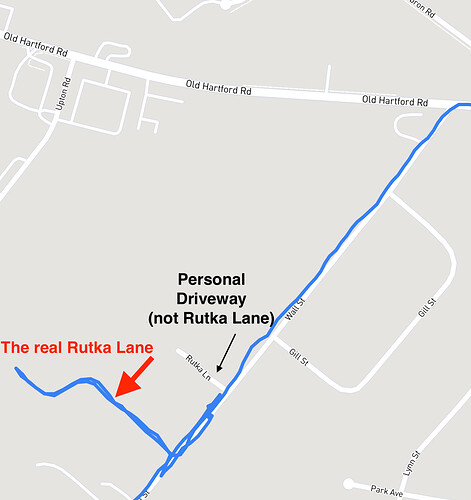 On Google Maps satellite view, what is listed to be Rutka Lane can be seen as a driveway: Google Maps

The owner told me the clearing that extends to Upton Rd is actually where Rutka Lane was going to go.

The Planning & Zoning minutes from 2017 address the debate over the building of Rutka Lane: https://www.colchesterct.gov/sites/g/files/vyhlif4286/f/minutes/11.21.17_zba_amended.pdf

Amy, I have changed this to a private driveway in OSM, so should disappear from CS in the next load