Nodes are way off street, streets marked not complete

I saw another post about this, but did not see a solution. Yesterday I completed 20 new streets, but 6 were only listed as “progressed.” When I looked at the nodes, they are sometimes past the end of the street and sometimes completely off. If you look at the map, you can see I ran the actual street though. Is there any way to fix this?

Here is a picture as an example (it will only let me upload one as a new user): 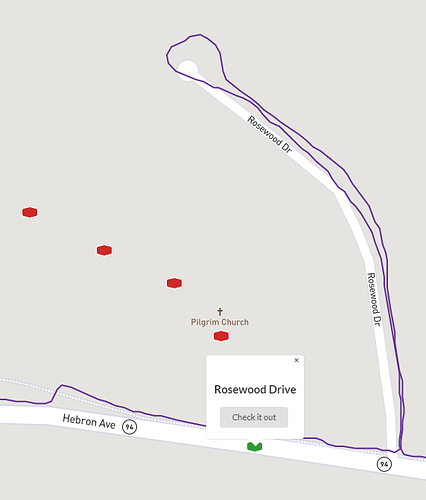 There’s no way to fix this yet, but one of my upcoming features is going to be a “suggested street modification” system. I plan on allowing people to suggest new streets, as well as suggesting edits to existing streets (I expect the main usage of this to be moving/adding/deleting Nodes).

I think I’m about 80% finished with the initial version of this, which will only handle street deletions. It’s adding onto the Street Flagging system that exists now, by letting people agree/disagree with the flag.