My street data has regressed 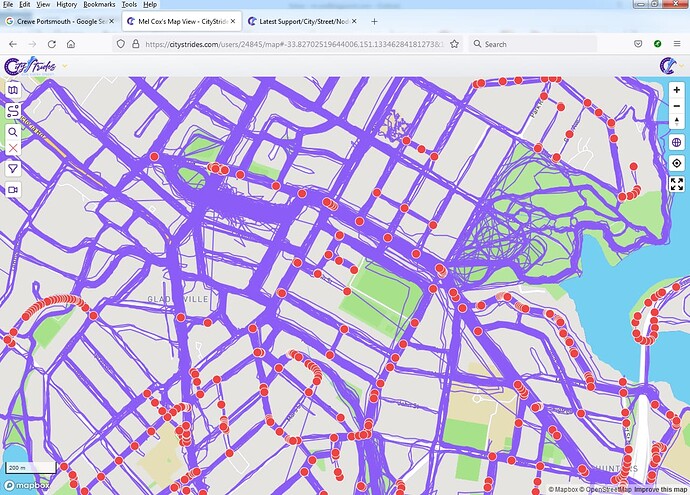 My profile does still show correct city completion progress. Can I get my data back?

Ah, I see the trouble…

I recently added Sydney. This city is much bigger than most others in CityStrides, and the backlog of jobs that this queue up is massive. It’s looking like it’ll be ~24 hours for that to wrap up.

The jobs are reprocessing the new data, which will clean up Node Hunter & bring your street stats back to normal.

A lot of the street count displays throughout the site ignore nested cities & all the existing cities you have made progress in are now nested within Sydney. This is why it seems like data is missing - each individual city will still display properly, though.

If you use Node Hunter from within the city page, that should get it working immediately. Node Hunter respects city borders if you’re on its page, so it won’t pick up all the new (and not-yet-processed) nodes in Sydney.

Thanks for the very prompt response James, it is a relief! I had wondered if it was a local issue, as nodes I have elsewhere appeared OK.

Hi,
I’ve noticed on my profile page that my total street count, Global Rank and Percentile all dropped quite a bit recently. In particular, the total street count is lower than the number of streets I’ve completed in some individual cities, so it looks like it’s not counting something it should.
Thanks!

A lot of the street count displays throughout the site ignore nested cities & all the existing cities you have made progress in are now nested within Sydney. This is why it seems like data is missing - each individual city will still display properly, though.

Thanks for pointing me here. I’ve read the thread and it makes sense. I’ll just wait for Sydney to finish processing. It looks like it’s taking a bit longer than 24 hours, but that’s all good.

The issue with streets being recognised in the LifeMap seems to be resolved, but the global street count is still showing very low for me (and for the OP). Is the processing still running?

@JamesChevalier the newly added Sydney seems to be nested in itself. I don’t know if that might lead to problems down the line, so I figured I’d give you a heads up.

Good catch - thanks! I’ve fixed that, which I expect to immediately fix everyone’s numbers @pedroqueiroz

On the topic of tidying up cities and incorrect nesting, the following are all Departments of France (county equivalent) and should probably be removed from CS and the cities nested within unnested:

I also recently passed 4000 streets, but my profile dropped to 167 streets. It’s now back to 2222 streets, but still seems to be missing about 1800 streets. Is the system still processing the addition of Sydney ?

I also noticed the Sydney within Sydney situation, and wondered if it might be an issue. I wonder whether the bigger Sydney could be renamed “Greater Sydney” to distinguish it?

I am in the same position as Denis, I’ve got some streets back in my total count, but not all.

This could be because of all the repeated street names. E.g., there must be dozens of “Victoria St” in Sydney, and lots of other names exist in at least a couple of suburbs. It looks like it’s only completed if you do all of them in Sydney, which is a bit nuts.

Yes, it is virtually impossible to complete some streets in Greater Sydney. James’s earlier reply seemed to suggested that only the highest level cities are included in a person’s overall street total - if that is the case then in my opinion it is a Very Bad Thing, for exactly this reason. It should be only the lowest level cities whose numbers are included, with all the larger groupings of cities being excluded (IMHO).

It should be only the lowest level cities who’s numbers are included, with all the larger groupings of cities being excluded (IMHO).

Instantly reminded me of this two and a half minute talk: 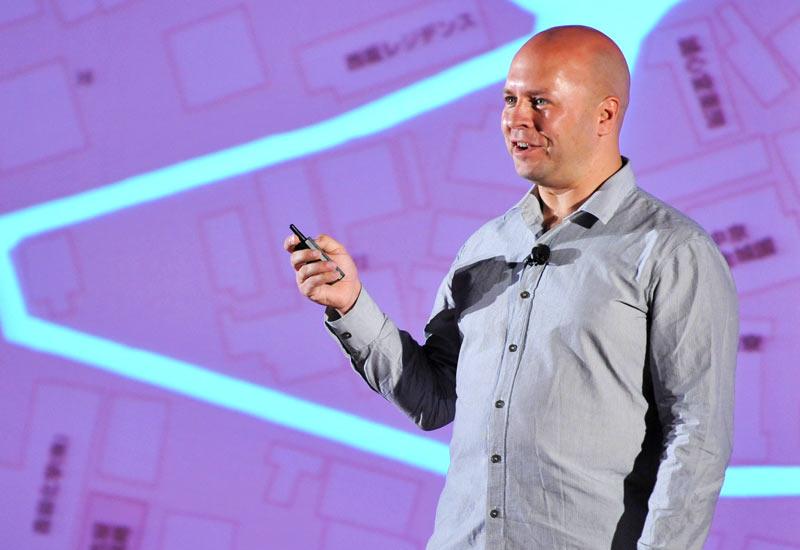 "There's a flip side to everything," the saying goes, and in 2 minutes, Derek Sivers shows this is true in a few ways you might not expect.

I’ll look into any weird issues that could come up from this change, and if nothing (too big) appears I’ll make the switch.

right away, I think of a situation where a parent city doesn’t have 100% coverage within its nested cities … in those cases, the counts would be decreased.

I don’t know how frequently that happens or how enticing that might make it to have people go create those nested cities in OSM in order to have full coverage.

This is my illustration of how the current setup (with top-level cities) is challenging: 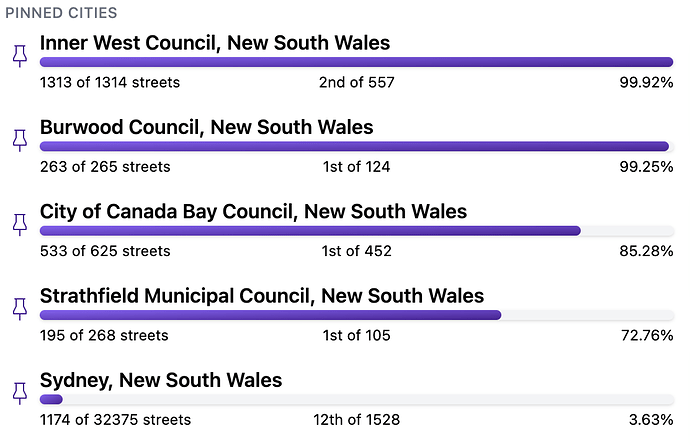 All the cities are non-overlapping parts of Sydney, yet my total street count in Sydney is less than even the total for the single largest part (IWC).

Even within the Inner West Council there are repeats (e.g., 7 different “Short St”).

In other news, my global stats appear to still be broken, showing 1,080 streets (which is less than I have in Sydney alone).

Despite all of this, I do like having the top-level Sydney stats – I think it makes for a nice community outside of just the suburbs I run in.

All the cities are non-overlapping parts of Sydney, yet my total street count in Sydney is less than even the total for the single largest part (IWC).

Streets with the same name in a city all count as one street. This is because OSM has no concept of streets, so I have to build that inside CityStrides. I do that by joining up all of the way records in OSM that have the same name. A great example of how this can go sideways is Victoria Road - CityStrides

It’s incredibly likely that you have completed a street in one of the nested cities and not the parent city. Since CityStrides currently does not use nested cities for stats, that’s not counting for you.
(scroll up two comments from yours for a short conversation about how that might change in the future)

In other news, my global stats appear to still be broken, showing 1,080 streets (which is less than I have in Sydney alone).

Counting can be, oddly, a slow query in certain situations. I heavily cache a lot of the displayed counts throughout the site. This is probably why your global count is lagging, and I’d expect your next completed street to sort that out.

Despite all of this, I do like having the top-level Sydney stats – I think it makes for a nice community outside of just the suburbs I run in.

Thanks, that’s nice/helpful to hear because this city has been a major source of pain for me. Its import queued up days of processing, which has me terrified for when it comes time to be updated from OSM.

I think the tradeoff when counting at the nested level is that fixing the undercount from “distributed” streets comes at the cost of double counting streets that cross the borders between nested cities. The way streets are counted now makes more sense to me, but I would gain a lot of streets from a change, so I’m feeling ambivalent about it

That TED was great!

I see the point about double-counting, but the creation of Sydney wiped out 2/3 of my street count here and bumped me down 900 positions in the global rank. I don’t think that’s ok either.

Even doing the Inner West Council was challenging with duplication. I have a photo album of all 7 “Short St” name plaques.

Maybe a compromise of (for counting purposes) not considering cities with more than X streets when there are smaller nested cities?

Or, speaking of unintended consequences, rolling back Sydney? It might be more trouble than it’s worth.